The Lofts at Beacon Gallery is still grappling with what the clearest directions are to reach their space.

Giving the actual address, which is 18 Front St. in Beacon, produces puzzlement, as most people aren’t familiar with the street name. Describing it as in the former Groveville Mills textile factory is helpful to those who lived in Beacon in the 1970s and earlier, but not to all the recent additions to the population.

Perhaps it is best described as: “You know that blinking yellow light you hit, along Route 52 (Fiskhill Avenue) near the car dealerships, with train tracks right there and very old-looking row-house kind of dwellings near those tracks? Well, turn in there.” If this brings a little recognition, hopefully within a few years the Lofts at Beacon will attract enough attention on its own so that locating it is a given.

Built around 1870, the complex of industrial buildings has already been converted into loft-like housing for artists; 29 rental units have been completed thus far, all occupied and with a long waiting list. Now the largest building is being renovated, with a goal of a further 50 residences over the course of the next three years. 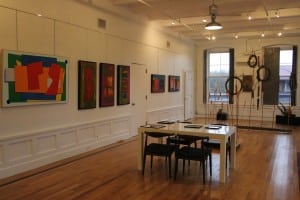 The Lofts at Beacon Gallery, with artwork from the just-closed exhibit ”40 Years Later”
(Photo by A. Rooney)

Originally an oak grove — a picnic place — the site became a gristmill. Groveville Mill was originally built in 1876; the complex containing the mill — where about 700 people were employed — and rows of brick houses for the millworkers were founded by Alexander T. Stewart, owner of one of the largest department stores in New York City.

First it was a carpet factory — a newspaper article described its workers as “commencing work at 6 a.m., working till 8:30 a.m., then having breakfast, and resuming at 9 a.m.” Other incarnations in the 20th century included Glenham Embroidery Works, Loeb and Schoenfeld Embroidery Mills, Beacon Looms, Beacon Rayon Fabrics, Beacon Piece and Die Works, and Lewittes Furniture Co.

Last used in the 1970s to once again produce carpets, the property was vacant until a 1997 purchase. A self-storage facility was put in at one end, and an overall cleanup was done, resulting in the beginning of construction of the artists’ lofts.

The lofts are zoned as 70 percent commercial, 30 percent residential, as living/working spaces. These range from 900 to 2,200 square feet, have 15-foot ceilings, large windows and wood floors, some of which are original. Beacon’s Aryeh Siegel is the architect for the project and designed its master plan. 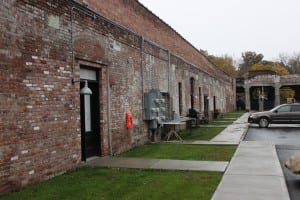 View of some of the reconverted apartments at what was formerly the Groveville Textile Mill
(Photo by A. Rooney)

All in all, the complex is a fusion of contemporary and historic, and a haven for Beacon’s many artists. In residence, according to the management office, are photographers, graphic designers, painters, sculptors and even a violin-maker.

New owners took over at the end of 2012, and plans for the complex include a building devoted solely to workspaces, landscaping and planting, possibly even a sculpture garden, and a tie-in to the Greenway Trail. The site contains the waterfall-like Groveville Mill Dam, the tallest on Fishkill Creek.

Part of a small hydroelectric facility, the dam helps provide water via tubing to turbine-driven generators housed in the mill’s historic brick wheelhouse building. Electricity made at Groveville is sent to Central Hudson Gas & Electric’s power pool for distribution.

The current owners re-did the floors in the building that contains the administrative offices. Seeing the space temporarily rid of furniture and looking at the beautiful new flooring, Beacon Lofts’ Project Manager Nicole Corneyea realized the large rectangular, many-windowed room would lend itself to showing artworks. As she had formerly worked for an artist and also once lived above a gallery, she pitched the idea to the owners, who let her run with it. 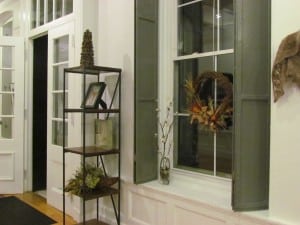 Now, about a year and a half later, eight or nine shows have been held at the space, dubbed Beacon Lofts Gallery. Starting with an exhibit coinciding with Beacon’s 100th birthday celebration, the space has seen all sorts of mediums since, and a steady stream of artists have asked about exhibiting their work.

A recent exhibit called 40 Years Later — Five SUNY New Paltz Grads, featured sculpture, photography and paintings by five BFA/MFA graduates who worked together 40 years ago at New Paltz. All five continue to live, work and produce artworks in the Hudson Valley, and a mix of their old and new works was presented. Last winter a special exhibit highlighted the creative talents of students at Beacon High School, with 70 pieces of their work shown in what is planned as an annual event.

Said Corneyea, a Beacon native: “We offer the space for free, and take no commission from work that is sold. We simply ask artists to help in hanging the work, publicizing the shows and providing food and drink for the opening reception … We’ve shown many different artists and particularly like having work by young people who have never shown before.”

The latest exhibit at the Lofts at Beacon Galley will feature works by the Hudson Valley Artisans Guild. A showcase and sale, it includes fine arts by Peggy Farrington and Scott Garrity, pottery by Marguerite Cotter, photography by Joe Turner and Bill Bogle, fine jewelry by Judy Bakely, Carol Foley and Lorraine LeClair, quilted works by Patricia Healey, woodwork by Peter Hammerling and home décor by Judith Subrize. 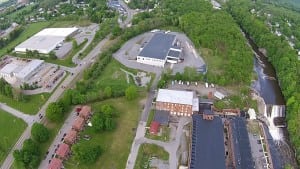 Aerial view of most of the Lofts at Beacon site, taken from a drone (Image courtesy of Aryeh Siegel)

One goal, besides showcasing the work of local artists, is to raise funds for an award for a Beacon High School student whose artwork will be shown at the next high school show, in January/February. This is important to both Beacon Lofts and the guild, since a main objective of the guild is to support young artists and promote art education in schools.

Beacon Lofts Gallery participates in Second Saturday but has found that, as they are off the beaten Main Street track, they are more successful at attracting visitors when they hold afternoon receptions, so people can start with them and then continue onto the main drag.

The artists’ reception for the new exhibit takes place from 1 to 5 p.m. on Saturday, Nov. 8. The exhibit runs through Dec. 28. Beacon Lofts Gallery is located within a building management office, and open Monday through Friday from 9 a.m. to 6 p.m., Saturday from 9 a.m. to 4 p.m. and Sunday from 11 a.m. to 3 p.m.

For more information visit loftsatbeacon.com or phone Nicole Corneyea at 845-202-7211.