Rain on three consecutive Saturdays kept some people away

Apple season is just passing its peak for the year, and local growers are pleased with the results. The Hudson Valley is a popular getaway for fall tourism, and picking your own apples is high on the list. New York ranks second in apple production in the U.S. after Washington and before Michigan. Although Putnam and Dutchess counties don’t have much undeveloped space for large orchards, our proximity to city dwellers means that the orchards around Philipstown are seriously popular destinations.

Danny Diesing runs Meadowbrook Farm in Wappingers Falls with his older brother, Ed. Although he described their 25-acre operation as “mainly just a small working farm for local people,” they advertise in New York City and southern Westchester and see a lot of visitors who want to pick their own fruit. 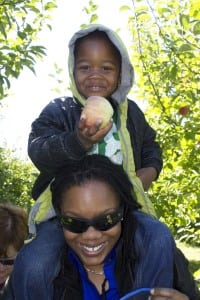 Jaden Myles Council of Queens was able to reach a big one at Fishkill Farms with the help of his mother Ebonie Council (Photo by Kevin E. Foley)

He described their harvest as pretty good this year and said that rain on three consecutive Saturdays kept some people away but that the last weekend in September was their most crowded. “If people are planning to come up on a Saturday and it rains, they have plans for Sunday and end up not coming up,” he said.

While Meadowbrook Farm doesn’t offer entertainment, they do have a petting zoo and a farm store with produce either grown on the farm or within 25 miles from other local growers. Another local destination, Fishkill Farms in Hopewell Junction, has more events, including hayrides, an outdoor grill serving food, picnic areas and games for kids on some weekends in the fall.

Julie Vanderlee, director of Community Engagement at Fishkill Farms, said: “We put a lot of time and energy into getting ourselves out there. We have a CSA in Brooklyn and are targeting young families. Picking apples is a great family activity.” She said while the flavor and quality of the apples were great this year, the harvest was smaller than last year due to the harsh winter.

Fishkill Farms’ orchard is about 60 acres, and they are trying a new planting approach with high-density blocks planted with thousands of trees. Vanderlee said, “We set ourselves apart with our ecological growing practices.” The farm has organic produce and some organic apples and other apples that are grown following integrated pest management practices that minimize the use of herbicides and pesticides.

Recently, Fishkill Farms had a line of cars stretching almost two miles outside its gates. Vanderlee said that on peak weekends, they average about 6,000 visitors, many from the city. This has been a record year for the farm as its popularity continues to grow.

What’s all the fuss about picking your own apples? Diesing said, “People love to pick a fresh apple off a tree, and it’s a perfect family outing. People can get outdoors on a nice fall weekend and enjoy seeing thousands of apples in the trees.” Throw in a cider donut, which both farms offer, and everyone is happy.