Note: The Paper’s Michael Turton took an early train down to New York City on Nov. 1 (Saturday) and played tourist — but not in Manhattan. Instead, he boarded the Seastreak for its 55-mile plus cruise up the Hudson River to Cold Spring. This is his account of the trip. It was the sixth consecutive week that Seastreak visited the village Saturday and Sunday, enabling hundreds of visitors to experience the beauty of the Hudson Valley’s fall foliage — and to explore Cold Spring for a few hours. Nov. 9 marks the last 2014 fall cruise.

There are no shouts of “bon voyage” at the outset of this cruise. “Mal” is more prevalent than “bon.” The temperature is stuck in the 40s and a raw breeze only adds to the morning chill. Huddled in line, passengers wait impatiently in a light but steady rain, a few protected by umbrellas, as the 140-foot Seastreak pulls in to Pier 11 on the lower east side of Manhattan near the foot of Wall Street. Just to the north, the Brooklyn Bridge is visible through the heavy, grey autumn skies. Vibrant fall colors are hard to imagine in this universally drab and damp cityscape. 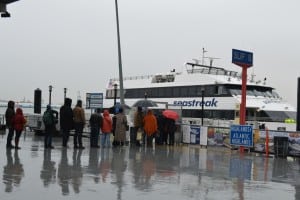 Seastreak’s cruise started out on a wet note at Pier 11 in New York City.

But after they hustle on board, the passengers’ mood improves immediately, no doubt thanks to the warm, dry conditions and very comfortable high-back chairs that await them. People settle in easily as the boat pulls away from the pier shortly after 9 a.m.

A full bar is open, but hot coffee is the beverage of choice on this morning.

The day-trippers are greeted by the voice of Paul Rush, who provides expert commentary along the route. Rush, a licensed guide, also operates New York City Walking Tours, leading dozens of uniquely themed and customized private tours of New York City on foot — though his business is not limited to urban treks. 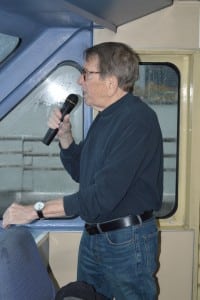 “I’ve also been doing tours in the Hudson Valley for a long time,” he tells The Paper. “That area is just so fascinating.” Rush speaks into the PA system microphone with the ease and knowledge of a 10-year veteran, one passionate about his work. He knows his stuff. There is no script.

As Seastreak makes the turn past Battery Park, the Statue of Liberty off to port, the Freedom Tower and the rest of the Manhattan skyline to starboard, the less-than-perfect weather becomes less of an issue. Even with many New Yorkers aboard, all eyes are on one of the most recognizable skylines in the world, the site of which alone seems to boost spirits.

There are 161 passengers on board. It’s mainly a middle-aged crowd, with a few younger travelers. The weather has taken its toll on. On the two previous weekends, two tour boats were needed, bringing some 600 visitors to Cold Spring each day.

Not surprisingly, fall foliage and the simple desire to get away for a day provided the motivation for most passengers.

Five women from the Jersey Shore have a slightly different reason. “We’re celebrating the 30th year of our girls club,” explains Dianne. “There was supposed to be eight of us but three wimped out because of the weather.” Three who did make the trip defy the laws of probability — their names being Joann, JoAnn and JoAnn. Paula, the other member, explains that the group gets together four times each year. 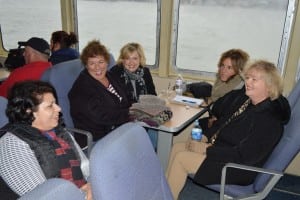 This group from the Jersey Shore celebrated the 30th anniversary of their Girls’ Club.

“No boys allowed,” she says. “We’ve been crashed by husbands and sons a few times, but we frown upon that.” Walking, shopping and lunch are high on their agenda once they reach Cold Spring. None has visited the village previously.

Ashok and Jenny, in their mid 30s, live in Jersey City, though born in India. “It’s been a very busy year and we thought we’d take some time off before winter,” Ashok comments. His wife has a slightly different thought. “After eight years of marriage, this feels like a date!” she says with a smile. Jenny explains that their two children are staying with family. “But they are here with us in our hearts and minds,” she adds. The couple’s broadening smile seems to also indicate that a day away from parenting is not all bad. 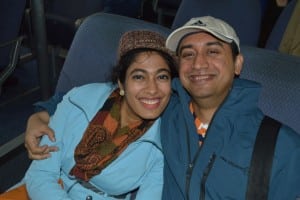 For Jenny and her husband Ashok, the trip to Cold Spring was ”like a date after eight years of marriage.”

Ian and DK, also in their 30s, live on the upper east side of Manhattan. They took the Seastreak to Cold Spring last fall as well — but on a much nicer day. “We prefer sunny but it’s always nice to be out in nature,” Ian says. Today, they are the only passengers to venture outside to sit in a relatively protected area at the stern of the boat. On last year’s trip they never left Cold Spring’s riverfront. “It’s so very peaceful there compared to Manhattan,” DK offers.

Some passengers, including York, a 67- year-old retiree, boarded Seastreak at 8 a.m. at Highlands, New Jersey, just south of Battery Park. Traveling solo, he seriously considered canceling but thought better of it. “I came across this tour on the Internet and thought it looked like a good day trip — despite the weather,” he says, adding, “I’ve never been to Cold Spring before.” 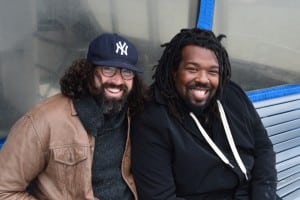 For Ian and DK it was a return trip to Cold Spring.

Two friends who both live in Queens part time are also on board for the first time. Shirley runs a music school in Florida and Patricia, born in Algiers, lives part of the year in France. Shirley has driven up to the Hudson Valley often in the past. “It’s so beautiful up that way,” she comments. “Things really start to change as you get that far north.”

Not a slow boat to Cold Spring

Luckily for those on the trip today, things do change considerably as the boat plies up the Hudson. The temperature remains quite cool, but the rain stops and the skies brighten. The landscape changes even more than the weather. Megalopolis gives way to small river towns. The Palisades meld into the Hudson Highlands. Urban concrete is traded for fall colors — still close to peak intensity.

This is not a boat cruise that lollygags along. Seastreak is capable of speeds of up to 42 knots or 48 miles per hour. It cruises at 38 knots.

As the weather improves, passengers begin to drift outside onto the deck to take photographs with their smart phones, cameras and tablets. Conversations shift from atmospheric conditions to what kind of food might make for the best lunch. One group is even having a drink at the bar.

River town after river town appears, then with surprising quickness fades in the distance. The stretches of open space, dominated by autumn forests, get longer and longer between towns. Yonkers, Tarrytown, Nyack, Ossining, Peekskill and more pass by in succession. Well-known landmarks come into view, taking on a very different look when seen from the middle of the Hudson River and not the window of a Metro North Train. Tappan Zee Bridge, Iona Island, Bear Mountain, Constitution Marsh and Osborn Castle come and go.

As Seastreak approaches Bear Mountain Bridge, one traveler wonders aloud if it is the George Washington Bridge — by now some 40 miles to the south. The U.S. Military Academy at West Point comes into view, prompting another question. “Is that a prison?” 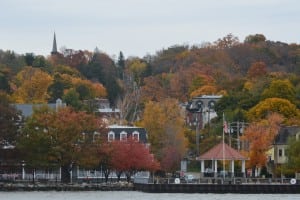 A colorful autumn landscape greeted passengers as the Seastreak pulled up to  the dock at Cold Spring.

But the mood is cheery now, buoyed by the better weather, the incredible river and landscape and fall colors that brighten an otherwise gloomy day.

Somewhere along the way, Paul Rush comments, “Cold Spring is my favorite river town.” As Seastreak slows and begins its approach to the dock just after 11 a.m., Cold Spring comes into full autumn view. It’s easy to understand why he might feel that way.

3 thoughts on “A Chilly but Cheery Cruise to Cold Spring”