A possibly much-changed village landscape appeared on easels and engineering maps at a meeting of the Cold Spring Planning Board Wednesday evening (Nov. 5).

During the sparsely attended meeting, the board began its formal site-plan review of the Butterfield project and also had a discussion with representatives of Blu Homes, the California-based modular homebuilder that wants to plant its Hudson Valley flag on Fair Street.

The Planning Board listened to a brief presentation from local planning consultant Glennon Watson of Badey and Watson and then from two Blu Homes executives, Bradley Robinson, director of integrated marketing, and Dave McCoy, manager of project delivery.

Watson described the project as an allowed use, but he acknowledged the plan sought maximum-square-footage use of the site and would require zoning review under the Village Code as to density and setback requirements. Watson described the anticipated traffic flow as that of a real estate office. The plan calls for five parking spaces. 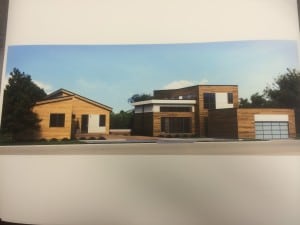 Conceptual drawing of Blu Homes modular models as they might appear on Fair Street in Cold Spring.

The plan would see two main modular buildings on the site; one serving as a model home for potential buyers to scrutinize and another to serve as a sales and design office where buyers can plan the interior elements of their homes. The former car dealership building on the site would be demolished.

Robinson said the company sees the Hudson Valley second-home market as a growth opportunity. He described Blu Homes as the high end of the luxury modular market. He said they chose Cold Spring and Fair Street to take advantage of the proximity to the Metro-North line and the many visitors to the area for hiking and other activities.

When asked, Robinson described the intended market area as including Dutchess, Orange, Putnam and Rockland counties, “all the way down to New York City. The market scope somewhat belies the idea that likely buyers will mainly take the train and walk to see the model home.

Watson and the Planning Board more or less agreed the plan would need at least five zoning variances under the Village Code. Accordingly the board voted to refer the matter to the Zoning Board of Appeals for the first stage of review.

The Butterfield engineers and the Planning Board consultants are still cobbling together and hashing over the necessary studies, maps and reports needed for a complete site-plan review. Chuck Voss, who leads the Planning Board’s consultants from the firm of Barton and Loguidice, told board members that the site plans and the consultants’ comments should all be ready for the board’s Nov. 19 meeting.

Voss did outline some of the plan’s details that board members will have to study and pass judgment on, emphasizing the several aquatic issues a development of this size entails including:

There was a brief mention that the Historic District Review Board has suggested the possibility of moving the two office buildings for the site, which would seem contrary to the special B4a zoning law the village created for the Butterfield project. Planning Board Chairman Barney Molloy suggested Butterfield reps have their attorney get together with the board’s attorney, Anna Georgiou, to review the law and its limitations. 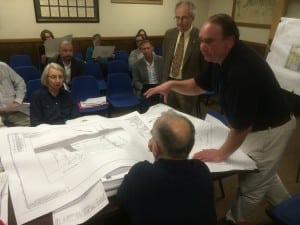 The planning board looks over the Blu Home plans at its Nov. 5 meeting.

During the public comment period, Village Trustee and liaison to the Planning Board Stephanie Hawkins attempted to both comment and ask questions of the board. She wanted to have the board discuss further issues raised at the board’s Sept. 17 meeting regarding the mass and scale of the Butterfield project, the limitations posed by the B4a zoning law, and the advice given by board consultants Voss and Georgiou during the environmental impact review process.

Molloy maintains a policy of permitting comments only on matters discussed during the meeting with no questions. Hawkins persisted in pressing the issue and asking other board members if they wanted to discuss the matter.

Asked by member Arne Saari if Hawkins’ questions could be addressed, Molloy said no. “It is not an agenda item and it is not part of the business before us. We have a specific charge and a specific issue before us.” Molloy twice asked for a motion to adjourn and didn’t get it, underscoring unspoken tensions regarding the issues Hawkins and board members have previously raised.

Board member Anne Impellezzeri finally obliged the chairman with an adjournment motion leaving the issue perhaps for another day.