Click to see video of ceremony by Gregory Gunder

Somewhere in France on the morning of Nov. 11, 1918, a military officer noted in his journal that the day was one of “chilled drizzle — as usual.” No doubt the mud in the trenches was equally uninviting. One hundred years after the outbreak of World War I, much more pleasant conditions greeted a crowd of about 50 people who gathered at the monument near Cold Spring’s main intersection in observance of Veterans Day, a day originally set aside to mark the end of hostilities in the “war to end all wars” and that now honors all those who have served in America’s armed forces. 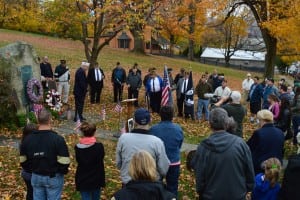 Originally known as Armistice Day, marking the end of WWI, Veterans Day now honors all who have served in America’s armed forces.

It was a brief and dignified ceremony, one conducted each year in many parts of the world, at the 11th hour of the 11th day of the 11th month. After veteran Ed Engelbride led the pledge of allegiance, master of ceremonies and fellow veteran Phil Schatzle called upon Parge Sgro, chaplain of the American Legion George A. Casey Post 275, to read the invocation. The day’s principal speaker, Roger Keppel, commander of VFW Post 2362, then paid tribute to James Harvey Hustis, for whom that post is named.

The fighting in Europe “must have seemed pretty distant to Hustis, a 17-year-old senior at Nelsonville Public School,” Keppel said. Hustis graduated in 1915 and volunteered for the U.S. Army in 1917, gaining the rank of corporal. He was wounded in the Battle of the Argonne Forest on Sept. 27, 1918, just days after his 21st birthday. He died on Nov. 8. During Tuesday’s benediction, Rev. Frank Geer of St. Philip’s Episcopal Church in Garrison pointed out the irony of Hustis’ death, which came just three days before the war’s end. 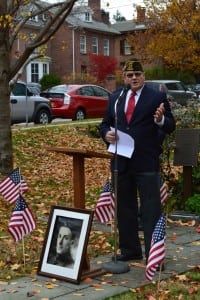 Roger Keppel, commander of VFW Post 2362, told the story of James Harvey Hustis, for whom the post is named and whose photo is at the base of the podium.

Hustis’ death is a reminder of the impact that war can have on even the smallest of communities. The scope of WWI was staggering. More than 65 million troops were mobilized on all sides. Hustis was one of the more than 8.5 million soldiers killed. Another 21 million troops were wounded. But the statistic that best captures the impact that WWI had locally is the fact that 120 Philipstown residents fought in that war. Nine did not return.

While Veterans Day honors all who have served in the U.S. military, Tuesday’s ceremony paid special tribute to those who made the ultimate sacrifice in service to their country. The names of local residents who died in one of three wars were read aloud by Ed Engelbride:

According to the historylearningsite.co.uk, U.S. Private Henry Gunter was the last soldier killed in WWI. He is listed as dying at 10:59, on Nov. 11, 1918. The record from his division states: “Almost as he fell, the gunfire died away and an appalling silence prevailed.”

The armistice was actually signed just after 5 a.m. that day, however the ceasefire did not take effect until 11 a.m., allowing time for the news to be conveyed to the front. In the interim, even as celebrations broke out in capital cites across Europe, fighting continued. It is estimated that 10,000 troops were killed, wounded or went missing on Nov. 11, including 3,000 American casualties.

In the U.S., what was originally known as Armistice Day was changed to All Veterans Day in 1954 and later shortened to Veterans Day. Some countries including France, Belgium and New Zealand have retained Armistice Day while others, including Canada and Australia, refer to Nov. 11 as Remembrance Day.