When I heard that the unknown-to-me Sundance Award–winning documentary E-Team would be coming up as the next Depot Docs feature (Friday, Nov. 21), I couldn’t stop myself free-associating to a TV series that was wildly popular in the mid-1980s. The A-Team was a group of Special Forces veterans of Vietnam morphing into soldiers of fortune, engaging evil-doers far and wide, doing good on behalf of the oppressed. Their humanitarian impulses — this being an entertainment concocted in Hollywoodland — were of course made manifest in over-the-top violence, and in the team’s unique ability to craft lethal weaponry from kitchen utensils and old car parts.

E-Team, on the other hand, co-directed by independent docu-veterans Katy Chevigny and Ross Kauffman, is verité filmmaking of the first order, focusing not on pretend heroes but on fully human beings, engaged in the dangerous work of documenting and exposing the worst human rights abuses and atrocities those in power are capable of. 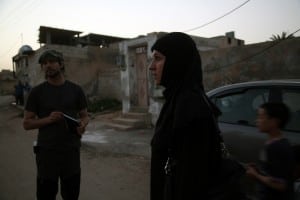 E-Team members Ole Solvang and Anna Neistat met while detained in Georgia in 2008, and later married.

That work is under the aegis of the Emergencies Program of Human Rights Watch, a nongovernmental organization (NGO) founded in 1978 to defend human rights as defined by international human rights and humanitarian law. HRW Director of Emergencies Peter Bouckaert, who lives in Geneva, is one of four E-Team members we follow in the film; the others are Fred Abrahams, based in Berlin, and Anna Neistat and her husband Ole Solvang, based in Paris.

To say we “follow” these fearlessly committed people is not to use the term metaphorically. Over the course of the film we are in Libya with Bouckaert and Abrahams after the fall of Gadhafi, in Syria with Neistat and Solvang as the violence of the civil war escalates, and with Abrahams in Kosovo during the Serbian atrocities that led to the creation of the Emergencies Program in the late 1990s.

In one amazing sequence, shot by Rachel Beth Anderson, we are crossing from Turkey into Syria with Neistat and Solvang, on foot, running to escape detection by border guards, climbing over barbed wire fencing. Back “home,” we’re in Berlin, Moscow, the Hague, Geneva, Paris and New York.

Because so much of the film was shot on location in the various war zones, the cinematography has a raw immediacy to it, an edginess. Some of that footage came from James Foley, the photographer who was later abducted by Islamic State fighters and recently murdered by them. The film is dedicated to his memory.

David Teague masterfully and effectively edited these location shots with the home footage, creating a complementary back and forth between the two. T. Griffin’s music is the heartbeat of the film, suggestively underscoring the action, whether it’s in-country or back home, coming and going at the right moments. 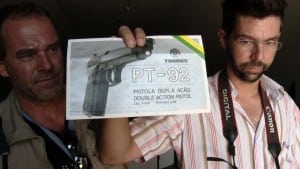 The time in war zones is, of course, frightful, and the agonized testimonies of victims are truly heart wrenching. But the filmmakers had complete access to the team members both at work and wherever else, and we get to see that their lives are not always lived at the extreme pitch of war and desolation, that they have everyday lives and concerns, households and children that want attention.

There’s something reassuring about seeing Abrahams pushing his child on a swing, and Bouckaert pruning a tree in his garden, and Neistat at home, dealing with her teenage son Daniil (as, in a sly moment, the camera pans the room and stops at two books, one entitled Just and Unjust Wars and the other The ABCs of Parenting in Paris).

In fact, during the course of the filming all three families had babies. In an interview, Neistat says, “What I like about this film is … it’s very human. It’s not a film about some selfless human rights heroes that have nothing else going on in their lives.” Indeed, the last scene of the film is in Neistat’s hospital room, with Solvang and Daniil holding the new baby. It could be Everyfamily, until the phone rings, and Neistat’s being asked if she can do an interview. “It’s about the executions? What time would you like to do that?”

E-Team will be shown on Friday, Nov. 21, 7:30 p.m., at the Philipstown Depot Theatre, Garrison’s Landing. Co-director Kauffman, Producer Marilyn Ness, and Editor Teague will be present for a Q-and-A and reception after the screening. For more information call the Depot Theatre, 845-424-3900, or go to philipstowndepottheatre.org. For tickets (recommended) go to brownpapertickets.com.