A crisp breeze, the dry crackle of leaves — harvest is over. A walk in the woods still exerts an undeniable pull, but even there the earthy smell of decay signals the end of another cycle of growth and abundance. The mood could easily tilt to melancholy, imagining this to be the end of something. Persephone is heading underground to hide until spring. As Pete Seeger paraphrased Ecclesiastes: “To everything, there is a season.”

We must keep in mind that although it may be beginning to look pretty bleak (This just in: Polar Vortex Returns!), this is all part of the natural cycle — birth, growth, flowering, harvest and decay; spring summer, fall winter. Even in the seemingly dead season there are signs of life. It just takes a little digging to uncover and appreciate.

What prompted this dark reverie was the gift of a harvest of wild mushrooms — a large clump of hen-of-the-woods mushrooms (Grifola frondosa, also known in Japanese as maitake). These hens are another reminder that despite the ripe flash of the indisputable growing seasons, an equal amount of flourishing actually takes place underground and out of sight, and only because of these cycles of death and decay. These exotic fungi are really the re-appearing fruit of an underground tuber-like mycelium that feeds on the organic decay of the woods for nourishment. Aboveground, we reap the rewards.

In traditional French cooking, forestière (literally “of the woods”) generally signals that the recipe contains wild mushrooms and potatoes (yet another “underground” ingredient), a classic combination. This gratin is the distilled essence of that union.

And while not everyone has the skill or confidence for foraging (in fact I strongly caution against it without expert guidance and a lot of practice), this shouldn’t prevent you from enjoying this dish. Dependable, fresh, wild and exotic varieties can regularly be found in season — locally at Madura Farms in the Cold Spring Farmers’ Market among other places.

Dried wild mushrooms — particularly porcini and morels — are a readily available culinary secret weapon. The drying process actually condenses their distinctive taste characteristics, and reconstituting them produces both an exotic ingredient and a complex and flavorful broth. Both varieties are commonly on hand in larger supermarkets and specialty stores (try Joe’s Italian Marketplace or Nature’s Pantry in Fishkill and Beacon Natural Foods). 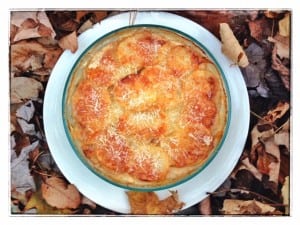 Best yet, there’s even a very simple   trick to extracting more intense if-not-wild flavor from even the common cultivated supermarket varieties. Roasting whole mushrooms — white buttons, crimini, Portobello, shiitake, oyster mushrooms — at 350 degrees for 20 minutes or so before slicing or chopping and cooking intensifies their flavor exponentially.

For this recipe I’ve used a combination of white buttons and dried morels, but if you can get your hands on some wild ones, feel free to substitute. Just remember that when using different varieties, cook them in individual batches, as the “woodier” types (shiitakes or hen-of-the-woods) take longer to soften than more fragile mushrooms such as oysters.

Culinary full disclosure: three cups of cream. Yes, this is rich. This recipe is based on Daniel Boulud’s classic French version (from his Café Boulud Cookbook) and dietary restrictions have been cast to the winds in favor of full Thanksgiving and seasonal excess.

5 to 6 ounces dried porcini or morels or a combination

4 pounds potatoes, sliced into 1/8-inch rounds (this is what mandolines are made for)

Heat the oven to 350 degrees. Butter a 10-inch round baking dish and set aside. On a large baking sheet roast the whole fresh mushrooms in one layer for 20 minutes. Cool slightly and chop coarsely. Reconstitute the dried mushrooms by simmering in water or broth in a small covered saucepan for 20 minutes. Drain, reserving liquid, and chop coarsely.

In a medium skillet over medium heat, sauté mushrooms in enough butter to keep them from sticking. Season with thyme, salt and pepper and cook until tender, adding a little of the reserved broth to prevent them from drying out. When done, mix in chopped garlic and set aside.

Pour cream into a large bowl and whisk in 2 ½ teaspoons salt, ½ teaspoon ground white pepper and the nutmeg. (You will need more salt than expected as potatoes tend to absorb it.) Toss potatoes into cream mixture.

By hand, arrange potato slices a single layer on the bottom of the buttered baking dish in overlapping concentric circles. Make a second layer and pour some of the cream mixture over it. Press down on the potatoes to compact the layers. Some cream should rise up between the slices.

Dust the assembled casserole with the Parmesan cheese and place it on a foil-lined baking sheet. Bake on the center rack of the oven for 45 minutes and check that the top is not getting too brown. If so, lower the temperature to 300 degrees to keep the gratin from coloring too much. Bake an additional 30 minutes. Remove from the oven and allow it to sit about 20 minutes to allow the potatoes to soak up more cream. Serve warm.