Despite the fact that the fixed observance of Thanksgiving (the fourth Thursday of November) is barely 75 years old, the culinary traditions associated with the holiday are firmly entrenched. And while some have lobbied for regional substitution — most notably food writer Calvin Trillin and his insistence on spaghetti alla carbonara as the only acceptable variant — tradition generally holds sway. And by tradition, we mean turkey.

A true American bird, the turkey fowl was considered by statesman and Founding Father Benjamin Franklin to be “a bird of Courage,” which “would not hesitate to attack a Grenadier of the British Guards who should presume to invade his Farm Yard with a red Coat on,” preferable in many respects to the bald eagle, “a Bird of bad moral Character,” as the avian representative of our country.

And while its size does make for a Norman Rockwell–ish, picture-perfect holiday feast, to me it’s basically just an overblown chicken and no match for the unctuous excess of, say, a Christmas goose. Coupled with the usually too-sweet sweet potatoes, pro-forma stuffing, obligatory Brussels sprouts and/or creamed onions, canned cranberry sauce and store-bought pumpkin pie that constitute the usual middle-American holiday “feast,” it’s no wonder the typical post-prandial reaction is sleep. What’s surprising is that this doesn’t occur more often at the table. 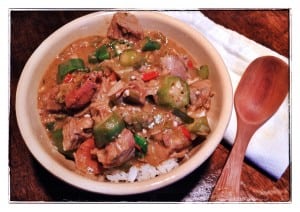 One of the real bright spots of Thanksgiving always being on a Thursday is the accompanying long weekend. And while Black Friday and “Christmas creep” seem to have become the de facto cultural rationale for the holiday, for me leftover turkey and its uses are a personal cause and celebration.

To be sure, endless variations on the turkey sandwich are always at the ready, and I’ll admit to bouts of believing that turkey hash — or better still, Diana Kennedy’s sublime but time- and energy-intensive enchiladas mole — are the absolute best use of these remains of the day, being a boy from the Louisiana bayous I always return to gumbo.

Just as south Louisiana is a melting pot of ethnic influences, gumbo — nominally a thickened soup of hazy African and Indian origins — has as many variations as the French, German, Italian and Spanish cultures that held sway there at different times. Every Cajun or Creole has their own take on “authentic.”

My maternal grandmother, Elmire LaFaye LeBlanc (who I often insist invented cooking as we know it), would start with a basic roux — flour browned in oil — seasoned with the “trinity” of Acadian seasonings: onions, celery and bell pepper, and leavened with a healthy dose of garlic. This roux would be seasoned, thinned with a good stock and simmered on its own for some time to round out the flavor. To this she would add whatever meat, vegetables or seafood were available or desired and further thicken the pot with a tablespoon or so of gumbo filé (ground dried sassafras leaves) and/or some sliced okra. Cooked a bit longer and served over fresh steamed rice, there’s nothing much finer on a chilly evening.

Back to the leftovers on hand: If you were smart and roasted your turkey with only a few onions and sticks of celery or carrot stuffed in the cavity, the carcass, stripped of the remaining meat and simmered with those reserved vegetables (plus a few a few more), is the basis for your stock. Andouille, a seasoned pork sausage, adds a piquant kick to the relative blandness of the turkey. (Kielbasa or any cured garlicky sausage is an acceptable substitute.)

Add some quick roasted and cubed chicken or turkey to bolster a paucity of meat. (I found fresh boned turkey thighs at Adams Fairacre Farms in Wappingers.) A handful of peeled shrimp or a dozen or so shucked fresh oysters would not be unwelcomed and are truly authentic, but by no means necessary.

First you make a roux: Whisk flour and vegetable oil together until smooth off heat. In a large stockpot or Dutch oven, heat the mixture slowly to medium-high, stirring all the while so it does not clump. As you stir, the flour will begin to brown. Continue stirring, scraping the bottom of the pot until the mixture is the color of light caramel.

Remove from heat and immediately add a couple of handfuls of the onion, celery and green pepper mixture stirring to incorporate. (It will begin to thicken.) Add more until it is all mixed in. Add the garlic, andouille, thyme, basil, pepper flakes and bay leaves and stir together.

Return to medium-low heat and begin to add the stock, a cup or so at a time, stirring to mix — the roux will begin to loosen up. Once all the stock is incorporated, simmer low for an hour, stirring regularly.

After an hour, correct the seasoning (salt and pepper) and add the gumbo filé, about half of the turkey chunks, half the sweet red pepper and half of the scallions. Simmer for a half hour to 45 minutes.

Add the remainder of the turkey and red peppers and the okra and return to simmer. Once the gumbo has returned to a soft simmer, prepare your rice as per package directions. This should take about 30 to 35 minutes total, at which point the gumbo is ready.

Serve over the cooked rice in soup bowls. Garnish with some of the remaining scallions and a dusting of filé.

One thought on “Small, Good Things: The Remains of the Day”