Revised residential-equestrian plan under review by Philipstown Planning Board

Revamped plans for an upscale residential and equestrian subdivision off Route 9 in an old soil mining area have drawn expressions of concern from a land conservation group and at least one neighbor as the Philipstown Planning Board reviews the project, called Hudson Highlands Reserve.

The firm withdrew that application Oct. 1 and later that month returned to the Planning Board with a revised version, featuring 28 houses, a pond and a horse facility, as well as a number of private streets (with restricted public access), on a tract of 155.4 acres. (By comparison, the long-controversial Butterfield Hospital redevelopment involves a parcel of 5.7 acres.) Route 9, a state highway, East Mountain Road North and Horton Road border the property, which also includes a stretch of Clove Creek and state-protected wetlands.

The Planning Board scheduled further discussion of the project for its Thursday night (Nov. 20) monthly session. 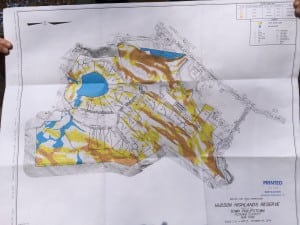 Horton Road LLC terms the project a conservation subdivision, a form of development that usually clusters buildings together to maximize open space (including forests), promote a sense of neighborhoods and neighborliness, and encourage walking. However, maps and environmental assessment form (EAF) details filed with the Planning Board show the proposed Hudson Highlands Reserve houses on large lots with neighboring homes at a distance on the side but not in front or behind a house — a layout that prompts questions about clustering and whether the project represents typical suburbia rather than a conservation subdivision.

Enacted in 2011, Philipstown’s updated zoning law frowns on creation of conventional subdivisions, seen as triggers for suburban sprawl. The Hudson Highlands Reserve tract is zoned rural residential, and in part, industrial-manufacturing, with soil mining, aquifer and open-space conservation overlay (OSO) districts. The law demands that at least 60 percent of land in a conservation subdivision be kept as open space, an amount that increases to 80 percent for OSO areas.

Because the project is the first conservation subdivision proposed since the rewriting of the zoning law, observers advise caution, given the likelihood of setting a precedent.

In a Nov. 5 letter to the Planning Board, Andrew Chmar, executive director of the Hudson Highlands Land Trust (HHLT), a leading regional land conservation organization, recommended that in handling the application the board use “extra care lest decisions made here have unintended consequences for the future and inadvertently undercut the purposes that the conservation subdivision provisions of the law are intended to serve.”

HHLT recalled that “conservation subdivisions must give priority to preserving a property’s features having conservation value and must relegate the sites for dwelling units to those portions of the property having no or the least conservation value.” In the case of Hudson Highlands Reserve, “rather than clustering the dwelling units on small lots to maximize the amount of open space protected,” Chmar wrote, the plan “spreads the dwelling units across the property on lots approximating 5 acres, with extensive roadways to connect them all, thereby reducing the amount of open space and fragmenting what remains. In our view, the plan resembles a conventional suburban subdivision more than it does a conservation subdivision.

“What’s more,” he continued, under the provisions of the zoning law, OSO conservation subdivisions not only must preserve at least 80 percent of the land as open space but also “set such open space land permanently aside in a conservation easement.” Chmar acknowledged that limited flexibility exists. For instance, he said, “a portion of the land so set aside may be on ‘one or more large parcels,’” if the Planning Board approves.

However, he added, “we do not think that the 28 similarly sized dwelling lots shown on the preliminary plan constitute the sort of large lots with open space that may be used to satisfy the 80 percent requirement … Truly large lots having substantial open space in its natural state that is contiguous with and undifferentiated from other similar areas of open space might qualify, but suburban-style lawns should not. On its face,” he told the Planning Board, “the plan appears to fall short of satisfying the 80 percent requirement” and “fails to provide the open-space protections required by the law for conservation subdivisions.”

The HHLT letter also pointed out that a detailed conservation analysis must be submitted “as the first step” in proceeding with a conservation subdivision. As of mid-day Nov. 19, no such analysis appeared to be on file with the town government; submissions to the Planning Board have focused largely on components of the EAF and related documentation.

Horton Road resident David Hunter likewise has reservations about the project. He and his family “are not opposed in principle to development of the property,” he told The Paper on Nov. 19. “Though of course many of us hate to lose undeveloped woodland, done properly, this development could be a nice addition to the community.” From the beginning, though, he said, they have wondered about the potential for more traffic on Horton Road and the implications for both vehicles and pedestrians as well as for road infrastructure.

Those concerns remain, but after reviewing elements of the latest plans and joining the Planning Board on a recent Sunday morning on-site visit to the Hudson Highlands Reserve property, other uncertainties entered the mix, too, for Hunter. “We have become wary of how the ‘conservation subdivision’ allowance in the fairly new zoning laws is being used in this” plan, Hunter said. “Instead of striving to achieve the density that the spirit of the conservation subdivision allowance champions in section 175-19 of the zoning law and setting aside large tracts for the ‘preservation of contiguous open space,’ the developers have set aside three large but fragmented parcels,” he explained.

Given the possibility the Hudson Highlands Reserve property development “will serve as a precedent for future developments throughout all of Philipstown” utilizing the conservation subdivision approach, Hunter suggested “that the Planning Board members will need to proceed cautiously and be very careful in how they consider this proposal,” which he also regards as “worthy of more attention from the residents of our town.”