Raven Howell considers herself fortunate to have grown up in a household where “poetry was not a strange thing.” Howell, a Cold Spring resident who has just published a collection of children’s poetry, Dozy Poems, Cozy Days, was “totally exposed” to the form through her father, a poet, and her mother, whom she dubs “a songbird, who also taught dance.

“It was just a creative household,” she said. That creativity rubbed off on Howell and now she has handed it down to her sons, the elder of whom, Maris, a college student, contributed the illustrations, that accompany the poems in Howell’s book. Dozy Poems, Cozy Days is designed as a curl-up, calm-down, “snuggly easing one in a lullaby-like melody,” parent-and-child page-turner. 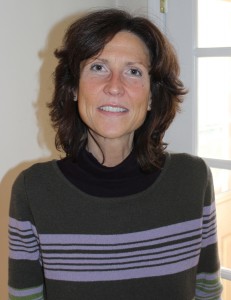 Raven Howell (photo by A. Rooney)

“There were always rhythms of one kind or another going on in the house, when I grew up,” Howell recalled, “and when I started playing an instrument it felt natural to come up with words to go along with the music. Since I can remember, I wrote songs, poems, plays; in fact my grandmother, who was my caretaker, actually wrote down the sing-songy verse I would spew out as a preschooler. About 10 years ago my mom gave me a binder of what my grandmother saved — it was wonderful to have.”

Eventually, Howell combined her interests in words and music and wound up in the publishing departments at a series of record labels: RCA, Atlantic and some smaller independent entities. There, while also involved in the administrative side of things, she dipped into songwriting, the highlights of which she notes as writing for Patty Smyth and submitting a song to Bonnie Raitt.

It was while working in the music industry that she met her husband, Dean, who was then working for a music publicist. After marrying and moving to Hoboken, they felt those pangs for more greenery and “something new” and found themselves in Cold Spring, where, after a year, Howell gave birth to Maris, followed a couple of years later by son No. 2, Jakob.

In the early years of new motherhood, Howell found it difficult to write songs, and she found herself shifting more and more toward poetry. With limited free time and the need to help support a growing family, Howell decided to try writing for greeting cards. She had already created a lot of verse to choose from, so she started to send it out, meeting with immediate success. “It was a different business then — there were no e-cards. I started submitting things from our little apartment on Main Street and got a great reception. I did that for a couple of years and then started phasing into writing children’s poetry for magazines.”

Howell said that writing children’s poetry is quite different, as a form, from other branches of poetry. “There are more rules, and you have to keep re-editing and endlessly figure out how to approach what you want to convey in a way that children will understand it.” Citing, as an example, the phrase “the leaves are falling down on the ground,” Howell said you can’t use that, “as you have to rhyme words exactly and precisely.” 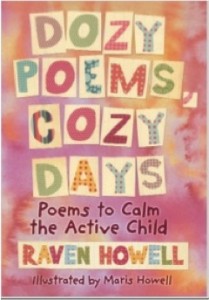 Although Howell intended from the start to write a children’s book, “there was an immediacy to [creating for] magazines, and that keeps you in motion, on your toes.” Meeting with success in this arena as well, Howell had poems published in many children’s magazines, including Cricket, Ladybug, Highlights for Children, Jack and Jill and Boy’s Quest. She is a three-time recipient of the Letter of Merit magazine award for poetry from the Society of Children’s Book Writers and Illustrators.

Putting together her first collection of poems in book form, Howell thought about the many children she knew who had been diagnosed with ADD, ADHD and their ilk and the forms of autism that translate into “agitated” behavior at times, and to the parents she knew who were always looking for ways to deal with unusually active children. She realized that many of her poems were “about a mom’s voice, soothing, using reassuring words like cradling, soft, beckoning, day fading,” etc., words invoking “the hush of night, napping,” and decided to make this the theme of the book. “I hope it will help some grown-ups as well as their children,” Howell said.

In thinking about the accompanying images, Howell, who usually does her own artwork, tried out a few ideas, using collage forms, crayons, acrylics, but nothing felt right. “The book is all about feeling safe and comfortable and the images needed to mirror that and be a little abstract and childlike. I tried everything, but I tend to draw ‘between the lines’ too much and I couldn’t do what was needed here,” she said. “So I asked Maris to give it a try.”

Maris, who is studying accounting, is also an artist and has taken art classes over the years. His back-cover biography describes him as enjoying “studying, shooting hoops, swinging a lacrosse stick and water in all forms — ocean, pool, rain and watercolor.” It was to watercolors that he turned for this. “What he came up with was just right,” his mother said with pride. Maris wound up providing an image for each of the 28 poems featured.

Dozy Poems, Cozy Days is available through Amazon and other sellers, and is being sold locally at the Country Goose in Cold Spring as a fundraiser for the Haldane senior class 2015 service-learning trip to New Orleans. A portion of the proceeds from all copies sold through the end of the year will be donated. For more information visit ravenhowell.com.