After a remarkable career at Haldane, Kelly Vahos is moving on to Division 1 volleyball at James Madison University (JMU) next fall. Last weekend, she was a key part of Haldane’s fifth consecutive appearance in the New York state class D final, a match that turned into a heartbreaking loss, by the closest margin possible, as the Blue Devils fell to Portville 26-24 in the fifth and deciding game, after holding a tantalizing 24-22 lead. 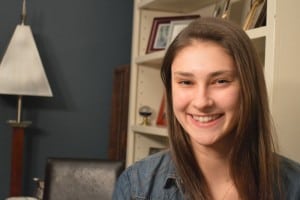 Kelly Vahos will atttend James Madison University on a full scholarship after a brilliant athletic career at Haldane. (Photo by M. Turton)

“That was definitely (our) greatest loss. It felt like we had earned the championship. We could see it in each other’s eyes,” Vahos recalled in a recent interview with The Paper. “We were one point away … then the ball dropped … and it was over. “

Vahos said that every hour since, she has replayed one part of the final game over and over in her mind, even in class while working on projects. “I can’t remember any of the points — except the two I messed up on game point. It’s heartbreaking,” she said. Her own toughest critic, she is just beginning to put the loss, her team and the game of volleyball in a larger life context. “Success isn’t measured by which plaque you hold. It’s the experience — the work, the passion, the dedication. And our team showed that this year.”

While losing is seldom, if ever, as much fun as winning, Vahos recognizes that the level of play in the final was something exceptional. “They were some of the best matches Haldane has ever played in. You could see the fire in players’ eyes,” she recalled. “The games were the most intense, the most thrilling you could hope for in high school.”

It’s obvious she will never forget Sunday’s loss, but Vahos is already learning from it. “The day after, I woke up at about 4 a.m. and did a lot of reflecting,” she said, explaining that she tries to take away something from every game. “I know there’s always room to be a better player, both physically and mentally,” she said, her mind still clearly on her final game as a Blue Devil. “You can’t always be your team’s best player. You have to put your trust in others.”

The scholarship Vahos accepted at JMU, located in Harrisonburg, Virginia, is the “full ride” including tuition, room and board, books and transportation. She passed up offers from a number of other top-notch schools including Harvard, Marquette, Loyola and Central Florida.

“JMU has great academies and that’s my number one priority,” she said in explaining her decision. “They also have a great volleyball program and were so welcoming … it felt like family.” What she described as “great food” and a “beeee-autiful campus” also helped her make up her mind.

Kinesiology and business will be the focus of Vahos’ studies although she hasn’t quite chosen which will be her major. Her thoughts on career ambitions indicate that kinesiology probably has the inside track. “I definitely want to go down the road of coaching. I need to be on the court, helping others,” she said. “I can’t see myself working in an office.”

Vahos will leave a legacy that future Blue Devils will have a tough time matching: 1,000 “kills,” two state championships, MVP of the 2013 state championship, two finishes as state runner-up and being team captain for two seasons. But when asked what she’ll remember most about Haldane volleyball it wasn’t her personal achievements that she mentioned first.

It was the support she and her teammates received from the school and the larger community. It took the form of encouragement from students and staff alike “every time we’d walk through the building.” Some of the support she found especially surprising. “I had parents I didn’t even know tell me it was an honor to watch me play. That really warms your heart,” she said.

And while she is a consummate athlete, Vahos does not mention sports when asked what she is looking forward to most as she heads off to play big league college volleyball. “I just want to be the best person I can be. A genuine person who people can trust. Someone with a smile on my face — not someone sulking over a loss.”