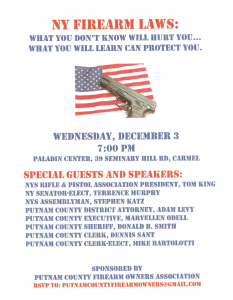 A brochure posted on the Putnam County website promoting the Dec. 3 event.

The county, on its official website, announced their plans to participate as special guests and speakers in the event next week, billed as a training course — apparently geared toward gun aficionados — on “NY Firearm Laws: What You Don’t Know Will Hurt You … What You Will Learn Can Protect You.”

Slated for 7 p.m., Wednesday, Dec. 3, at the Paladin Center in Carmel, the forum also involves Tom King, president of the New York State Rifle & Pistol Association, the New York state branch of the National Rifle Association, and retiring County Clerk Dennis Sant, who set off a national controversy over his refusal to allow news media access to county files on gun ownership, documents in the public record, after the massacre of school children in Newtown, Connecticut.

The free event is sponsored by the Putnam County Firearm Owners Association, organized this past August “to protect and preserve the rights of firearms owners living, working, or shooting in Putnam County, New York.” The group requests those who want to attend to “RSVP” via its email address: [email protected]