Parents everywhere used guilt at meal times to coerce children into eating things they didn’t like, usually vegetables. There were starving children in another country who would be happy for that steamed broccoli or green beans. The 2014 equivalent could be the greenhouse gas that is generated by wasting food and sending it to a landfill. The National Resources Defense Council estimates that 40 percent of all food in the United States is wasted and never makes it onto the table. Climate change is the new starvation complex. 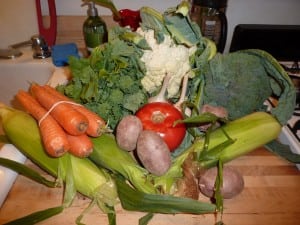 Food and other materials that can be composted and recycled accounts for 35 million tons in landfills annually. (Photo by P. Doan)

This week is a good time to notice these habits. Brussels sprouts, potatoes, broccoli, onions, garlic, yams, carrots, parsnips, turnips, pumpkin, squash, apples, oranges, lemon and assorted herbs — our Thanksgiving dinners probably included a lot of vegetables and fruit in addition to the main event — an ode to the fall harvest.

After the tryptophan-induced nap and the cleanup come the leftovers. Almost as anticipated as the meal itself, the second and third and fourth meals are devoted to creative uses of post-holiday fare.

Or are they? If 40 percent of our food doesn’t make it to the table to begin with and then you throw in the leftovers and the scraps of food discarded during preparation, it all adds up to a significant part of our waste. The Environmental Protection Agency keeps track of these things, and even though Americans are recycling and composting more than in previous years, food waste still makes up 35 million tons of our landfills every year, and household consumers account for nearly half of that wasted food (groceries and restaurants are another issue). That equates to 20 percent of the total amount of garbage we throw away, more than plastics.

The good news is that our waste is at the lowest rate since the 1980s, with the average person generating 4.38 pounds of waste per day and recycling or recovering 1.5 pounds, but organic materials are still the largest portion of that waste — paper, food waste, landscape matter. This is still a huge area for improvement.

Composting rates have risen as some cities have instituted curbside collection. While that isn’t happening anywhere in Philipstown, some municipalities, like Cold Spring, encourage it by offering low-cost composting bins.

Now back to the vegetables that are prepared for Thanksgiving dinner. All the peels, skins, leaves, stems, cores and seeds make a lot more sense in the garden than in a landfill. Winter composting has its own challenges, though. My compost pile is far enough away from the house that it’s unrealistic to trudge through the snow to get to it. I haven’t tried vermicomposting and don’t have a good place in the house to keep a worm bin in winter. The solution is a winter compost bin that’s near the door.

I experimented with do-it-yourself compost bins made from trashcans for two winters now. The most successful has been a plastic trashcan with small holes punched in it with an electric drill. Use a fairly large drill bit and make holes up and down the sides and in the top and bottom for airflow. Compost needs oxygen to break down. Don’t make the holes too large, though. The point is to keep rodents out and the organic matter in while letting it breathe. I put it on top of a couple bricks to let air circulate through the bottom, too.

I made the holes too large the first time I tried this and lined the inside of the can with a screen that’s used for windows, but it got caught when I turned the compost with a pitchfork. Switching the screen to the outside of the can didn’t help; scraps fell out and collected on it.

With the holidays upon us, it’s a good time to consider consumption and take steps to minimize our carbon footprint through recycling and composting during a period that can be very indulgent. Reducing food waste at home can be a great family project that doesn’t have to involve guilt, but could instead be an exercise in healthy eating. Whether you do it for the long-term health of our planet or for the starving children in a community not too far off, it will save money and feel good, too.