Arthur Miller classic performed by Haldane Drama on Dec. 5 and 6

Last year, in a shift from earlier lighter fare, Haldane’s high school drama tackled a 20th-century American classic, Our Town, with the cast relishing the opportunity to interpret a formative piece of literature. Haldane drama’s director, Martha Mechalakos, decided to continue in this rich vein this year, with the students now traveling back to well beyond the 100-year mark of Our Town’s setting, to the earliest days of European settlement in North America in Arthur Miller’s The Crucible.

With drama proving a strong lure for students, as it consistently has done for the past few years, “double casts” — a separate one for each performance — will transform themselves into the denizens of Salem, Massachusetts, in 1692. 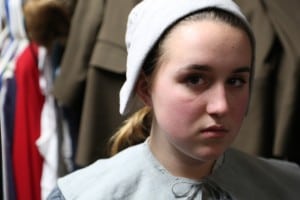 The Crucible, written in 1952, is now such a staple of high school literature and holds such a prominent perch on the list of top-10 plays performed in high school that it is frequently the prism through which many acquire their knowledge of that stretch of colonial history known as the Salem Witch Trial period.

The playwright acknowledged The Crucible as an allegorical representation of investigations by the House Unamerican Activities Committee and related Senate hearings by Sen. Joe McCarthy. Miller, inspired by reading a thousand-page study of the period written in 1867 by the then-mayor of Salem, did meticulous research on what transpired at Salem, transforming it dramatically but keeping true to the personages and his perceptions of their motivations during that tumultuous, dread-filled time.

“[Mayor Charles Upham] had not only written a broad and thorough investigation of what was even then an almost lost chapter of Salem’s past but opened up to me the details of personal relationships among many participants in the tragedy,” Miller wrote later in an article in The New Yorker explaining how he came to write The Crucible.

The Puritan colony of Salem, founded in 1629, was, of course, subject to British laws, one of which was enacted in 1641 and made witchcraft a capital crime. According to many accounts, in 1692, after a child’s illness was medically ascribed to witchcraft, other young girls appeared to display the same symptoms. Fingers were pointed, and one girl accused several adult women, initially women easily scapegoated, then others in more prominent positions in society, of responsibility. 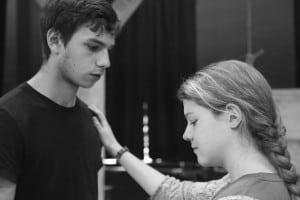 The allegations and subsequent arrests of those accused became widespread, and a new court with multiple judges was convened to try these cases. The accused were given no legal representation and were allowed no defense witnesses. Prosecutors and magistrates brought many cases to trial, often allowing what was called “spectral evidence,” or testimony about intangibles: dreams and visions. All in all, over the course of a few months, 200 people were accused of witchcraft and 20 were executed.

Just a year later, after a different court was convened — one that did not allow spectral evidence — all remaining defendants were pardoned, and, eventually, years later, their families compensated, after the colony admitted the trials were a mistake.

In the 1996 New Yorker article, Miller explained why he felt compelled to write The Crucible when he did:

McCarthy’s power to stir fears of creeping Communism was not entirely based on illusion, of course; the paranoid, real or pretended, always secretes its pearl around a grain of fact … How could one deal with such enormities in a play? The Crucible was an act of desperation … By 1950, when I began to think of writing about the hunt for Reds in America, I was motivated in some great part by the paralysis that had set in among many liberals who, despite their discomfort with the inquisitors’ violations of civil rights, were fearful, and with good reason, of being identified as covert Communists if they should protest too strongly … The Red hunt … was becoming the dominating fixation of the American psyche.

Miller went on to describe his own visit to Salem in 1952, where he read the transcripts of the trials, particularly drawn to reports written by Rev. Samuel Parris, a chief investigator at that time.

As with most humans, panic sleeps in one unlighted corner of my soul. When I walked at night along the empty, wet streets of Salem … I could easily work myself into imagining my terror before a gaggle of young girls flying down the road screaming that somebody’s ‘familiar spirit’ was chasing them … Naturally, the best proof of the sincerity of your confession was your naming others whom you had seen in the Devil company — an invitation to private vengeance, but made official by the seal of the theocratic state … The more I read into the Salem panic, the more it touched off corresponding ages of common experiences in the ‘50s: the old friend of a blacklisted person crossing the street to avoid being seen talking to him … and so on.

Miller’s understanding of these pressures on all sides born of fear translated into characters whose exterior behavior may not always match their inner feelings, something Mechalakos has emphasized in guiding high school actors through the challenges of portraying them. “Basically you can’t take any of the words at face value — they belie what’s really behind them,” she said.

This is resonating with Leandra Rice, who is playing one of the lead roles. Rice noted: “Initially I viewed my character, Elizabeth Proctor, as plain and nothing too special. Thanks to Mrs. Mech, I see that Elizabeth has a lot of depth, and she is more complex than what meets the eye. She has a lot of bottled-up pain. This concept has made it a challenge, but a rewarding one.” 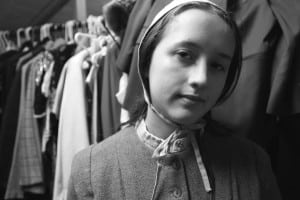 Another actor, Jeremy Roffman, described the many facets of his character, some initially obscured, similarly: “My character, Giles Corey, initially seemed to me like nothing more than a blunt old man. He doesn’t come off as the brightest character either. But as we have rehearsed the play, I’ve come to realize that as blunt and stubborn as Corey seems, he is honorable and loyal. He can barely control himself as he strives to prove his wife’s innocence in court. When asked for the name of the man who provided him with his evidence, Corey refuses to speak because he knows that the man will hang if his name is revealed. In the first act, one of Giles’ lines reads, ‘I never thought you had so much iron in you.’ This is exactly the phrase I would use to describe Giles Corey.”

Mechalakos generally begins the rehearsal process by doing read-throughs with both casts and talking generally about themes. “It’s your job to find out everything you can, whether or not you use it,” she tells the actors. Although many in the cast had read the play before (it is part of the Haldane curriculum on certain English tracks), Mechalakos said that “it is so different to inhabit a play rather than just reading it; simply reading it, you often don’t get it because you’re not getting emotionally beyond the words … Here there’s that balance between big, passionate speeches and their intense undertones. Fear is always an underpinning.”

As for discussing the climate in which Miller wrote the play, Mechalakos said that it is broader than just the McCarthy era. “You can take any time period in history, including our own, and see the capacity of humans to hurt each other to save their own skins as well as the use of religious fanaticism in order for political gain. I want something visceral from this play, and it’s hard for teenagers to get to that passionate place — the audience should come out of the play feeling drained.”

But The Crucible is not just a “political” play — it’s also a study of people. Rice said: “This play is relevant today, especially with teenagers. The mob mentality that occurs between Abigail and the rest of the girls can be applied today. We call it peer pressure. The girls in the play along with teenagers tend to do things in groups they would never do alone. The moral to the story is stay true to yourself and your boundaries.”

The Crucible will be presented at 7 p.m. at the Haldane auditorium. Tickets cost $5 for students and seniors and $12 for everyone else and will be available at the door.