There comes a moment in the life of every successful small business when they wonder if it’s time to consider expanding. For The Hop, the combination bar / restaurant / craft beer store on Beacon’s Main Street, that moment came very quickly.

“I think it was a few hours into our first night,” recalled bar manager John-Anthony Gargiulo. Crowds jam-packed the tiny storefront on opening night four years ago and never left. Rare was the weekend in which the bar stools weren’t all occupied, the tables weren’t all full and the aisles weren’t filled with people drinking, talking and laughing. 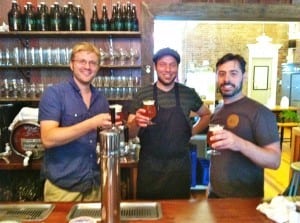 John Kelly, Matt Hutchins and John Anthoney Gariulo at The Hop when it opened in 2012 (file photo by K.E. Foley)

More breathing room was in order, so two weeks ago The Hop moved down to the far east end of Main Street. The new space is four times as big with 20 bar stools instead of three, 16 beers on tap instead of nine, and a pavilion out back for when warmer temperatures return. But the implications of the relocation reach far beyond seating capacity.

“Everyone already wanted to be down here at the east end of Main Street, but The Hop is going to push that even further,” said Brendan McAlpine, principal of the newly rebranded and rechristened Roundhouse, which sits across from The Hop on the other side of Beacon Falls. “They’re now the end of Main Street.”

With The Hop now at 554 Main St.; The Roundhouse continuing to transform the throng of factory buildings at the corner of Main Street and East Main into restaurants, condos and event spaces; and crowds from Dogwood at 47 E. Main often spilling out into the street, the once sleepy and shuttered east end of Main Street has suddenly become a hot commodity. And businesses aren’t just opening there: They’re staying open, making it past that crucial first year.

“That really bucks the trend,” said McAlpine. “There used to be a lot of turnover on Main Street, and a 25 percent vacancy rate. Now you can’t find an empty commercial storefront. Beacon’s not a big town. Less than 15,000 people live here. That says a lot about not only how popular it’s become with tourists but how Beaconites support their local businesses.”

The lounge at the Roundhouse (photo by B. PJ Cronin)

It’s not just the locals supporting the east end businesses; it’s the business owners as well.

“We’ve never been competitive with each other; we’ve always been cooperative,” said McAlpine. On more than one occasion, The Hop has supplied The Roundhouse with kegs when orders fell through. Gargiulo sends people leaving The Hop over to Dogwood and The Roundhouse. And when Dogwood first opened, The Roundhouse welcomed them.

“People said to us, ‘Aren’t you concerned? They’re right up the street. They’re going to take business away from you,’” recalled McAlpine. “And we said, ‘The more, the merrier.’ There’s a reason why restaurant rows exist. If there are enough good options in one place, you all bring in more people.”

Three and a half years after opening, The Roundhouse is bringing in more people than ever. The restaurant just wrapped up its busiest two-week period in its history. The number of hotel rooms, now at 23, is set to become 40 by next year. They’ll need them: The Roundhouse is currently booked for about 70 weddings in 2015.

With all of that going on, The Roundhouse is still planning on opening a spa, a microbrewery, more condos and even a few commercial spaces. So why the rebranding now?

“It was a bit of a mouthful,” said McAlpine about the project’s original name, The Roundhouse at Beacon Falls. “I think everyone knows we’re next to the waterfall now.” The separate names that each of the site’s venues previously sported — Swift for the restaurant, 2EM for the lounge, The Patio for the outdoor dining space — have been jettisoned since the public always simply referred to all the spaces as “The Roundhouse” anyway. And the restaurant’s menu has been refreshed and streamlined, a move that’s already won raves. 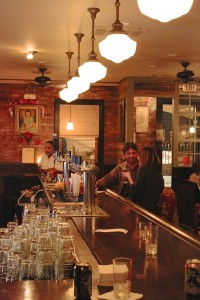 Inside Dogwood (photo by B. PJ Cronin)

“I think the rebranding of The Roundhouse has been fantastic,” said Gargiulo. “As a local, I’ve been going to eat there more and more. I said to my girlfriend, ‘It’s nice to be able to just walk here, and have this experience.’ If we want more people to move to Beacon, we have to have more amenities like that. People can’t just see us all as bars; they have to see us as culture.”

The Hop’s commitment to culture and consumer education is immediately apparent even to those who just pop in to pick up a six pack for the weekend. Go ahead and ask them to recommend an unfiltered wheat beer to go with that casserole you’re putting in the oven tonight, or a local IPA (India pale ale) that will impress those friends of yours in Vermont you’re on your way to visit. They’ll give you options. But Gargiulo insists that The Hop’s success isn’t about the beer at all.

“We’ve always had great beer and good service,” he said. “But the food is the reason that people keep coming back.” No mean feat considering the old kitchen consisted of a few hot plates, panini presses and a toaster oven. Now chef Matt Hutchins has an actual commercial-grade kitchen, with gas stoves and a full staff. The menu has grown, as has the quality of the food.

“Our food is off the charts right now. I honestly think chef Matt is one of the best chefs in the country,” said Gargiulo in the calm and measured tones of someone who is neither exaggerating nor bragging. But he admitted that they were all a bit nervous about how the transition would work out.

“We were actually looking at bigger spaces than this one,” he said. “This was the conservative choice for us.”

Maybe too conservative. Last Sunday (Nov. 23) at 3 p.m., a week after reopening, every bar stool was occupied. The tables were all full. And the aisles were filled with people drinking, talking and laughing.