One of my mother’s part-time endeavors when I was growing up was working as an Avon sales representative in an effort to keep food on the table for her eight kids. She sold lotions and lipsticks and believed in the product. With all those children running around, who wouldn’t need a splash of lip color? She may have been tired, but she smiled through assorted shades from rose to copper.

And despite the realities of life, it was easier to feed the family with the help of her giant roaster pan. Having the right kitchen tools (ask any worthy chef) can lighten the load, and she welcomed any shortcuts she could find.

When my mother told me a few years ago that she was downsizing and wanted to pass along a few items, I spoke up for the pan in her pantry. 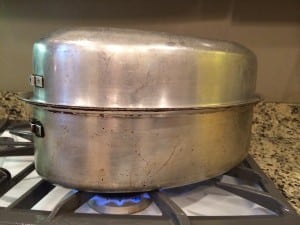 The pan in the pantry

She purchased her 18-inch Vita Craft in 1949 when she was working in the civil service and living at the women’s Evangeline Residence in Washington, D.C.

“A salesman came around to show those pans to some of the girls, and some of us were engaged at the time,” Mom said. Without a kitchen but ready to work culinary miracles, this Department of the Treasury single secretary became the proud owner of a new set of finely crafted cookware. The pans remained shiny and new at Evangeline, where meals were prepared for residents. The only time my mother ever came close to a stovetop during those D.C. days was when she made a cup of tea in the tiny basement kitchen accessible to the women who lived there.

The roaster once sparkled as the centerpiece of a set. After getting married and raising a family, with year upon year of cooking for a houseful, she was left with one pan that didn’t fall apart.

When I unpacked the roaster pan that my mom shipped to me from her home in Colorado, I could almost smell those family favorite chicken and dumplings that we savored for Sunday dinners. On a fortunate weekend or holiday, if the shiny silver roaster pan wasn’t in the oven, it sat on top of the stove, covering two range burners. Thick egg noodles and chunks of chicken immersed in a creamy broth simmered for dinner.

Mom showed me how to prepare those dumplings with care. She had learned to make the meal from her mother-in-law, a Depression-era home cook who by necessity made use of every scrap of poultry for the family table.

“Put your flour and salt in a bowl and break your egg yolks right into it,” she instructed. “No egg whites at all,” she whispered. “The yolks make them nice and rich.” She carefully worked the egg into the flour with a fork and gradually added water until the dough held together. She formed the dough into a ball and transformed the kitchen table into a giant cutting board by dusting it with flour and rolled the dough with a wooden rolling pin. “Cut them into an inch wide and make them about two inches long.” 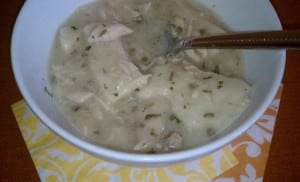 With a butter knife, we made delicate cuts in the dough. We placed the dumplings into her pan where the broth and chicken were cooking at a low boil. Mom insisted that we never stop stirring. We cooked those dumplings until they were just right by her standards. Through her ruby-red Avon lipstick, she shared the final instructions … and her appreciation of bright hues: “Add two splashes of yellow food coloring.”

The dish was complete, and our family would soon empty the pan. Leftovers rarely existed, but that edible comfort was sealed into memory.

Place chicken and giblets in pan and add enough water to just cover chicken. Add a teaspoon of salt and the bay leaves to water and bring to a low boil. Boil for two hours until fully cooked. Remove chicken from pan and cool. Skim impurities from stock. Debone and hand-shred chicken. Dice giblets. Set aside.

Add onion and celery to the stock. Bring to near boil and simmer 10 minutes. Add chicken and giblets to broth.

For dumplings, gently mix flour, egg yolks, 1 teaspoon of salt and enough water to moisten firmly. Mix dough and form into a ball. Roll dough out onto floured surface. Using a butter knife, cut dough into 1-inch strips. Divide strips into 2-inch portions, for a batch of 1-by-2-inch egg dumplings.

One thought on “Cook On: The Pan in the Pantry”