Many of the hikers who get lost, injured or stranded on Philipstown’s numerous rugged trails share a very similar backstory. Most are not from the area, are far from their comfortable, urban surroundings and are not very familiar with the western Putnam County landscape. Often, when they do get in trouble, they hesitate to call for help.

That was not Julian Graff’s story, though he did find himself in a very precarious situation, high on Bull Hill, above Cold Spring, on the afternoon of Sunday, Nov. 30. Graff, the 16-year-old son of Dorothy Carlton and Pascal Graff, owner of Le Bouchon Restaurant, has lived in Cold Spring since he was 5. A member of the Haldane football team, he’s in good shape, hikes on a regular basis, and is comfortable navigating local trails. But he was not immune to making several mistakes — errors in judgment that could have cost him dearly.

Going to the edge

Just before noon on Sunday, Graff headed out for what he initially thought would just be a walk. But he changed his mind, opting instead for a more rigorous hike up to Bull Hill — also known as Mount Taurus — via the Washburn Trail, a popular path that begins opposite Little Stony Point Park on the northern edge of the village.

Mistake No. 1: He altered his plan without being fully prepared — and told no one.

“I’ve been up there before and I wanted to see the quarry from the other side. I know the trail pretty well,” Graff said.

Mistake No. 2: He hiked, alone, to a location that, while close to the village, is isolated and not without its natural hazards.

Graff’s problem started almost as soon as he got to the old quarry site. “I went to the edge of the cliff at the top,” he told The Paper. “I was looking down. As soon as I turned [away from the edge] my right foot slipped … and I slid right down.”

Mistake No. 3: He was unaware of or ignored local conditions — the ground was wet and slippery after a snowfall. 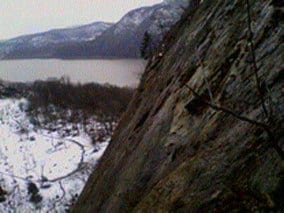 As Graff began to slip down the cliff, he reacted instinctively, desperately grabbing for anything to hold onto. “I tried to grab the top of the cliff but couldn’t; it was too slippery,” he said. “I grabbed a branch about 3 feet down — but it broke. I was able to grab a second branch.” His feet finally took hold and he came to a stop. Graff found himself on “a small ledge, a perch, that was kind of angled,” he recalled. “There was a lot of runoff and it was very slippery.”

Graff’s fall had left him about 20 feet below the edge of the cliff and he knew right away that he was stranded. “There was no getting up that cliff,” he said. Nor could he climb down. He estimated it was an 80-foot drop to the safe ground below.

And conditions were not pretty. Runoff flowed down to the ledge in a steady stream — extremely cold runoff from melting snow. “I was really cold and I had banged up my knee a bit,” Graff said. His feet were especially wet and cold. “I should have had proper footwear.” There was still snow on the trails and Graff said his boots were not suitable for those conditions.

Mistake No. 4: He wore inadequate clothing.

It was about 12:30 p.m. Graff had his cellphone and chose to immediately call his mother. “It was quicker than 911,” he said, explaining that he and his mother had taken the same hike together in the past and that she would know exactly where he was. He also knew that his cellphone battery would soon be dead.

Mistake No. 5: His cellphone was not fully charged.

Carlton said that she had a premonition that something was not right, even before Julian took his fall. “I said a prayer and texted him. He texted back and said everything was fine.” Just minutes later, her phone rang. It was her son. “Mom, I’m in a lot of trouble. I’m stuck,” he said. “Call for help right away — I can’t get out of the position I’m in.” 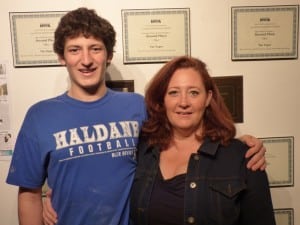 Graff was holding on, clinging to the narrow, rocky and very slippery ledge.

“I knew he was in a lot of trouble. It’s not like him to exaggerate,” Carlton said. She called the Cold Spring Police Department, got in her car, and headed to where her son was stranded.

Cold Spring Fire Company No. 1 (CSFC) was contacted and a rescue team sent out. Chief Josh DiNardo told The Paper that he also immediately contacted Orange County officials, whose Technical Rescue Team is specially trained in rope rescues. The team includes personnel from several fire departments in Orange County, including West Point and departments from as far away as Port Jervis.

Vini Tankasali, Orange County fire coordinator, quickly dispatched 20 members of the Technical Rescue Team to Bull Hill. The North Highlands Fire Department was also on the scene in mutual aid to CSFC. Carlton said there were so many rescuers that “it was like something out of a movie.”

Rescuers were able to get a “ping” from Graff’s cellphone, narrowing his location, but they worried his phone would die at any time, Carlton said. “I was panicked; I really thought what would happen was that he would slip off that spot — and there was no place for him to land safely,” she remembered thinking. “They couldn’t get there fast enough.”

Graff said he was surprised how quickly his rescuers were able to make the steep, half-mile hike up to him, carrying a variety of equipment including some 100 pounds of rope.

Special teams do their job

The CSFC team got to the top of the cliff first and lowered a rope to Graff, securing him until the Orange County team could arrive. When the Technical Rescue Team got there, one of its members rapelled down to Graff and quickly fastened him into a harness. “The guy who came down to me was totally professional,” Graff remembered. “We had to rappel down” the cliff face together in order to get to safe ground.

As it turned out, Graff had been stuck at what DiNardo later described as “exactly the same spot” that another hiker was stranded in June 2011. During that incident, a CSFC rescue team successfully pulled the hiker up the cliff rather than lowering him down it.

A very long four hours after he had become stranded, Graff was finally back on solid ground, uninjured but very cold and wet. His rescuers immediately gave him water, blankets and a dry jacket.

Carlton was impressed with how her son’s rescuers handled the situation. “They did everything exactly the way it should be done. They used caution, thought it out and then used a special harness to get him out,” Carlton said. “I was very thankful.”

Toward the end of their interview with The Paper, Carlton turned to her son and said, “I hope you learned a lesson. That was reckless.”

“I know. I got it,” was Graff’s response. The look on his face said that he meant it.