Attacking SAFE Act by defunding it proposed at state level 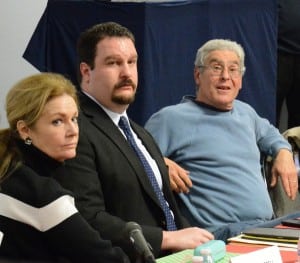 “This is what you call a packed house,” one attendee observed to another as the hall filled, though whether he referred to the crowd or any weapons it carried was unclear.

Levy signaled that enforcing the SAFE Act remains a low priority for his office, Bartolotti called the law “a disservice to every citizen,” and Smith denounced it as “one of the worst pieces of legislation ever passed in New York state.” Odell and Bartolotti pledged continued defense in court of Putnam’s refusal to disclose handgun ownership information in the public record, sought by The Journal News newspaper. The newspaper sued and the county lost in court though the appeal process continues.

Levy said the SAFE Act barred law-abiding citizens from owning certain guns and ammunition, which meant law enforcement officers “were automatically turned into criminals.” As a district attorney, he said he took an oath to uphold the law. “I’ll do that,” if a court decision favors the SAFE Act but will proceed with the discretion allowed him, he said. “We have to prioritize in the office,” Levy observed. “I’m not going to say I’m not going to follow the law.” However, “it’s the way we allocate resources to do that” which counts. [Editor’s note: Click here for a letter to the editor from Levy.]

State Assemblyman Steve Katz, whose district includes much of Putnam County though not Philipstown, warned that “the SAFE Act is there. The idea of repealing it is not realistic.” Yet, he said, it can be defunded and rendered powerless. “This is the piece we can get them at,” he said of the law and its supporters. “And that’s what we will do this time,” in the next state budget.

Odell outlined the county’s efforts to prevent disclosure of gun-owner data and said that with the newspaper demand “we were being challenged on our basic rights and freedoms.” She referred to individual gun-owners, including a retired policeman and a woman victimized by a stalker, who face potential harm from disclosure of information, and described the fight as one of protecting safety and privacy. “We were standing on the side of right,” she said. “It’s about acting responsibly when newspapers act irresponsibly. That’s our position.”

Bartolotti said the clerk’s office “will keep fighting in the trenches” and questioned why the news media “would want to put everybody in harm’s way.” He argued that public officials can shield citizens from likely risks and said, “I do believe we are on the side of right.” 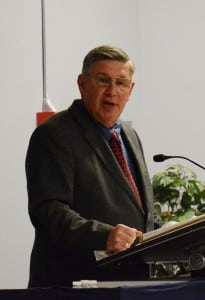 Smith, like others, emphasized Putnam’s ranking as the safest county in the state, a status he attributed in part to the citizens. “Putnam is one of the most well-armed counties in America today,” he said. He faulted the SAFE Act as “unworkable for the police” and told the audience that “if you look at places where these laws have been applied, you look at high-crime areas,” such as Chicago and Washington, D.C.

“People will tell you that you can’t have a safe county and have a Second Amendment” to the U.S. Constitution, Smith said, urging his listeners to “keep these [Constitutional] principles alive.” The Constitution “puts a lot of responsibility on ‘we the people,’ ” he said. “We the people have got to be heard.”

The Constitution opens with the phrase, “We the people of the United States” and its Second Amendment similarly uses the plural term “the people.” Odd punctuation and all, in its entirety the Second Amendment states: “A well-regulated militia, being necessary to the security of a free state, the right of the people to keep and bear arms, shall not be infringed.”