First four in a surprising win after tight race

Early on Nov. 22, the rowers from Building Bridges Building Boats gathered on a beach in Hull, Massachusetts, along with 190 other high school students to compete in the Northeast Regional Youth Open-Water Rowing Championships, aka the Icebreaker. The temperature was 35 degrees with a steady 15-knot wind, gusting to 30, that was blowing straight onto the beach across the transoms of 28 gig boats lined up along the sand. 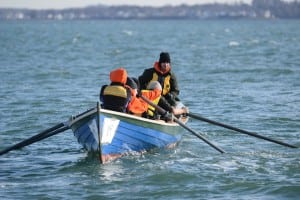 BBBB rowing in the second race of the Icebreaker

There were to be three races in each of seven classes, a total of 21 matches. The first race was six-oared boats crewed by second-boat (junior varsity) rowers followed by two heats of novice fours. That was as far as it got before all the coaches were summoned to the top floor of the unheated boathouse.

The wind, as forecast, was rising, and there were whitecaps in the bay. Ed McCabe, the perennial boat guru of the Icebreaker, described the conditions from the point of view of the chase boat. It was quickly agreed that it was too dangerous to continue as planned. After a lively discussion, coaches signed onto the principle that only the most experienced rowers would be allowed to compete.

The new racing protocol started with first sixes. BBBB rowers had never been in a six-oared gig, but they decided that since it was the best chance to get the most rowers on the water they would take it. These boats need six rowers and a coxswain. BBBB had brought seven rowers and a coxswain. It was obvious to the crew of mostly seniors that it should be a junior that would get left behind. Accordingly, six seniors and one junior from Haldane climbed into the six-oared gig named Kittery and clawed off the shore into the breaking waves. They lost. But they hung in and stayed with the pack. 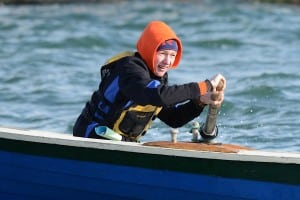 The next and, as it turned out, final race was first fours, and each team was to compete in the boat it came with. The BBBB boys, some of whom were looking pretty beat after the first race, jumped at the chance to row their own beloved boat and give the unraced junior a chance to compete. Once again there was a half-mile pull against formidable breaking waves to even get to the start, but get there they did, lining up against the best open water rowers in the Northeast.

When the horn blew the start, BBBB rowers in the Robert C. Bickford jumped out to an early lead. Over the next thousand feet, the Sound School gig crept up until she was gunwale to gunwale with the Bickford. Both boats pulled hard toward the windward side of the first buoy, resulting in a minor oar tangle that allowed Stuyvesant High School out of New York City to close the gap.

This had all three gigs heading pell-mell into a cluster at the first turn. BBBB rowers did what they knew to do, which was to row hard without cease until they squirted out of the pack leaving the two other boats in a tangle, unable to keep from being blown down on the wrong side of the mark.

Well ahead of the two other boats but now missing an oar as a result of the fray, Robert C. Bickford headed toward the last buoy. The other two gigs followed in Bickford’s wake making steady progress until suddenly one of the gigs, then the other, turned toward the shore and, ignoring the second mark entirely, raced across the finish line. 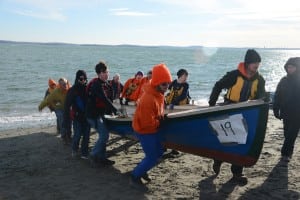 BBBB loads their boat after the Icebreaker

Meanwhile, BBBB continued alone rounding the second buoy as McCabe in the chase boat lay off Bickford’s quarter and yelled against the wind, “Keep rowing! Never give up! Trust me.” Three of the BBBB boys continued pulling heartily, massively in fact, while the fourth sat oarless and still in order not to wick any energy away from Bickford or the remaining rowers.

Onshore it was assumed that BBBB had lost. Nonetheless the crew was laughing and high-fiving, energized by the inconvertible truth that at that moment they were the equal of any of the four-oared gig crews in the Northeast.

At the awards ceremony, McCabe, to the surprise of many, declared BBBB the winners and thus champions and awarded the crew a plaque. The BBBB boys had done what years on the Hudson River trained them to do: to row together, no matter the conditions, and not to stop until each of them arrived at their destination.