Some environmentalists call them “bomb trains.”

And because the trains, as well as boats, carry vast quantities of the volatile fuel along the Hudson River and beyond, on Jan. 28 Gov. Andrew Cuomo ordered state agencies to confront the dangers. Last week, his administration reported progress on some initiatives, ongoing work on others and the need for similar responses by the federal government and oil industry.

Conservationists welcomed the state’s tentative good news, but echoed its pleas for a doubling-down of efforts by other players. The trains run along the Hudson River, typically on the river’s western side, past historic communities, numerous schools (including the U.S. Military Academy at West Point) and near sensitive environmental areas.

Supervisor Richard Shea Wednesday night (Dec. 10) proposed at a Town Board workshop that Philipstown take a stand. “A lot of communities have passed resolutions calling for a more thorough study of the track bed, a more thorough study of the whole process,” he said. “The volume of trains carrying this type of oil has increased dramatically. Suddenly there was just a lot more traffic coming down the other side of the river.”

He said it involves “the same type of oil, same situation” as in Canada, where a recent oil-train accident killed 47 people and devastated a village. Along the Hudson, “who would be responsible for responding to an emergency episode like that? Are they going to rely on volunteer emergency services?” 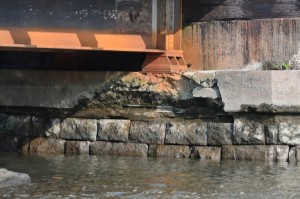 Concrete has crumbled beneath one of the bridge’s vertical supports (file photo).

Shea also mentioned a photo shot by a resident this year of an apparently deteriorated trestle across the river and an apparent shrug-off by the pertinent train company. (Philipstown.info reported on such a condition. See “CSX Says Bridge Safe,” Aug. 1.)

“It strikes me as a hazard and something that hasn’t been looked at,” he said. “We’re not asking for the world here. We’re just asking, ‘Has somebody taken a good review of this?’ What about the CSX track bed? What about DOT [Department of Transportation] protocols?”

Councilor Mike Leonard remarked that a crude-oil rail accident “would have a direct impact on the Hudson River — direct. It’s not like you’re inland and you’ve got time to contain it somehow.” Along with all the other massive problems, an accident would probably shut down not only trains on the west side of the river but river traffic as well, Leonard said.

Other board members made similar points and Shea promised to draft a proposed local resolution soon.

From New York to North Dakota

New York state released its 58-page “status report,” Transporting Crude Oil in New York State: A Review of Incident Response and Prevention Capacity, Dec. 1. As the report notes, since 2008 a huge upsurge in production of crude oil, much of it from the Bakken shale formation in North Dakota and Montana, and Saskatchewan and Manitoba provinces in Canada, has led to a proliferation of crude-oil transport through New York state.

A map prepared by Scenic Hudson shows oil-train routes along the river (click image for PDF).

According to the document, New York contains no refineries, but Albany serves as a transfer hub and crude-oil trains use up to 25 percent of rail lines in New York, conveying the oil to refineries elsewhere.

“Over the past six months, our administration has taken swift and decisive action to … better protect New Yorkers from the possibility of a crude oil disaster,” Cuomo said on the report’s release. “Now it is time for our federal partners to do the same.” The report explains that the federal government holds “exclusive statutory and regulatory authority over the interstate transportation of crude oil”

Tuesday (Dec. 9), the Empire State found a potential ally halfway across the country, when the North Dakota Industrial Commission, which includes that state’s governor, adopted new rules forcing oil producers to make Bakken crude safer before shipment. The commission mandated that, pre-transport, the fuel be conditioned to separate it into gas and liquid and remove light hydrocarbons and keep a vapor pressure of no more than 13.7 pounds per square inch (psi), less than the national standard of 14.7 psi.

In an October letter, Joseph Martens and Joan McDonald, commissioners of the New York State Departments of Environmental Conservation and Transportation, respectively, had asked North Dakota to adopt such regulations.

To deal with the problem closer to home, New York state’s April report recommended numerous actions [See “Crude-Oil Train Hazards Bring Federal Emergency Action, State Efforts,” May 16]. Its Dec. 1 report outlines the follow-up since then and says that, among other things, the state:

With the rail corporation CSX, held railroad and tank car training for local and state emergency responders in the Hudson Valley and other regions.

In conjunction with Canadian Pacific, another railroad, organized oil-spill containment training for first responders on the Hudson River in Albany.

Released “strategic and tactical guidance for fire departments during the initial phases of a rail incident involving crude oil,” while observing that “any significant derailment involving a crude oil spill or fire will likely require a large-scale and multi-agency response from all levels of government.”

Encouraged the Coast Guard to review the response plans of tankers and tug boats involved in crude-oil shipping by water to ensure that those plans adequately account for potential dangers and worked with the Coast Guard in coordination efforts.

Asked the American Petroleum Institute (API), a leading trade group in Washington for the oil industry, and the API’s member oil companies, to reduce the volatility of Bakken crude oil before shipping it by railroad.

Furthermore, according to the report, in March the state fined CSX $10,000 for tardy notification of two derailments and in May announced a $5,000 fine of Canadian Pacific for a derailment. However, it complained that “while the rail industry has made progress” lately on enhancing safety, “the oil production industry has actively opposed taking protective measures.”

Like the state, Rep. Sean Patrick Maloney — who lives in the Cold Spring area — wants a more vigorous federal role. This fall he requested the DOT to promptly finalize regulations stipulating that controversial DOT-111 train cars be discontinued or retrofitted to meet heightened safety standards.

“Since 1992, we’ve known these were highly hazardous, which is precisely why we need to immediately phase out” such models, currently “carrying highly explosive and dangerous crude,” he said. “With billions of gallons of oil barreling down the Hudson, it’s an accident waiting to happen if we don’t act. The safety of our neighbors, environment and communities is far too important.”

Scenic Hudson commended New York state actions so far but also urged renewed efforts. It likewise reiterated its call for “a moratorium on crude oil transport along the Hudson River until further safety measures are in place.”

The environmental group also proposed that the state change its oil spill fund program to increase fees on crude oil transported through the state and channel the additional money to spill prevention and preparedness. At present, it said, cleaning an oil spill would cost 40 times more than the spill fund contains.

“It is crucial that the state dedicate additional resources to dramatically reduce the daily threat to communities and natural resources throughout the state and in the Hudson Valley,” said Ned Sullivan, Scenic Hudson president. “We’ve seen disasters with crude oil accidents across the nation, experienced derailments in the Hudson Valley and witnessed a rising public outcry for the state to make this issue a priority.”

Another Hudson River–oriented environmental group, Riverkeeper, also advocates more stringent controls over crude-oil trains, or, in its parlance, “bomb trains.” Nov. 25, Riverkeeper petitioned the federal government to limit oil trains to 4,000 tons, a weight that, it said, the American Association of Railroads associates with “a ‘no problem’ train” — less likely to derail.

Riverkeeper said the weight restriction would limit crude-oil trains to 30 cars, in contrast to the 100-car trains mostly used now. “Setting a cap on train length and weight is a necessary, logical, safety step … one of the simplest ways to reduce the risks that our communities, first-responders and ecosystems are confronted with on a daily basis,” said Phillip Musegaas, Riverkeeper’s Hudson River program director.

Specifically mentioned in the state report, the American Petroleum Institute did not respond to a request for comment. In a Sept. 30 press briefing, though, API President Jack Gerard discussed the issue.

“North America’s rail network moves hazardous materials without incident 99.998 percent of the time,” Gerard asserted. “The challenge for both industry and regulators is to address and eliminate the remaining .002 percent.” He endorsed outreach to emergency responders “to help ensure they have the training and information they need” and cited API’s support for trains’ “enhanced braking capabilities” and “proper testing … as well as tank-car design,” new-car construction and safety-retrofitting.

However, he argued that moving too fast could disrupt fuel production and cost, in consumer impact, $22.8 to $45.2 billion over 10 years. “While tank cars are an important part of the comprehensive approach to safety,” he concluded, “there are limits to what tank car design can achieve. Getting to zero incidents will take an equal effort to prevent accidents and improve accident response.”

North Dakota’s tougher standards take effect April 1 and, according to its industrial commission, affect “every barrel of Bakken crude” in the state. Lynn Helms, North Dakota’s director of Mineral Resources, said his department would conduct field visits and that any oil company failing to comply with the rules could face penalties of up to $12,500 per day of violation.