With wit, tears, laughter and soaring music, mourners from diverse backgrounds united at St. Mary’s Episcopal Church Sunday afternoon (Dec. 14) to remember Gordon C. Stewart, founder of Philipstown.info and The Paper, whose larger-than-life exploits took him from New York theater aisles to White House power corridors, executive business suites, conductors’ podiums and the hills of the Hudson Highlands, on the way amazing, inspiring and sometimes overwhelming those around him.

Stewart, 75, who moved to Garrison with his family in 2007, died suddenly Nov. 26, fighting the emphysema that had not deterred his plans to brighten Philipstown’s holidays with further productions of Messiah, the Handel masterpiece he conducted last year. Before he and Messiah could return to St. Mary’s, the Cold Spring church became the site of his memorial service. Yet Messiah, like Stewart’s legacy, goes on, with two performances scheduled for Dec. 21.

The 275-plus attendees who packed St. Mary’s and spilled out its doors last Sunday included four men who eulogized Stewart after encountering him in one or more of his many capacities: Garrison neighbor always ready to reach out to others; White House speechwriter with a commitment to service and habit of going where he wanted, invited or not; local theater aficionado who built a new ensemble to perform old, classic plays; and friend to those who play a different sort of role in local governance and public affairs.

Frederick Osborn III, philanthropist and activist on the boards of several area organizations (including that of Philipstown Info Inc., the parent of Philipstown.info), knew Stewart as a friend, neighbor and a “very good man … one of the greater, far greater” on the scale of those met in life. 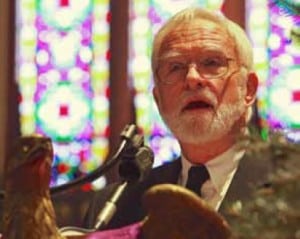 “The range and depth of his talents and accomplishments were astounding” and as a result, “Gordon Stewart intimidated me,” confided Osborn. He mentioned Stewart’s work not only in launching a newspaper but supporting other new public-spirited projects, such as Hudson Valley Seed and the Farm to School program. “The zest for a better world is what Gordon Stewart” exemplified, with “an enthusiasm and gusto that was contagious.”

Osborn noted that Stewart believed “being kind, caring, and listening to your fellow human beings is what matters far more than what you’ve accomplished” in a career and other pursuits, as important as those are. He taught that “it’s nice to be important but much more important to be nice,” Osborn said.

Hendrik Hertzberg, President Jimmy Carter’s chief speechwriter, recalled his adventures with Stewart, the deputy chief speechwriter, in sites ranging around the world, including Vienna — where, thanks to earlier orchestral studies, Stewart proved adept at “hitting all the best coffeehouses in town” — and the presidential inner sanctum, which Stewart, though not authorized, “somehow infiltrated himself into” to coach Carter on a speech he and Hertzberg had drafted, the famous albeit misnamed 1979 “malaise” speech.

Hertzberg reminded the congregation that, contrary to political lore, the speech garnered widespread praise, though Carter himself wrecked the momentum it built by reshuffling his Cabinet a few days later.

“The speech was a huge success and Gordon deserves an enormous amount of credit for that,” Hertzberg said. “Because of that [coaching], this was the best-delivered speech Jimmy Carter had ever made.” Stewart’s brazen intervention was typical, Hertzberg pointed out. “Gordon made his own agendas, his own life, his own career.”

In a subsequent staff exit interview, Hertzberg recounted, Stewart defined speechwriting not as an exercise in manipulation of emotions, presidents or the nation but a form of service, asking provocative questions: “‘How do we make things work? How do we find something that we believe in — that we can do about the situation … and lift people up?’ He could have been talking about all his life … and actions,” Hertzberg said.

Richard Shea, Philipstown’s town supervisor, and Stewart interacted in the sphere of local public affairs but shared interests and discussions that ranged far beyond. Voice sometimes breaking, he spoke of Stewart’s deep love for his wife, Zanne, and daughter, Katy, and commitment to his community. “For me, Gordon was a mentor in the true sense,” Shea revealed. “With the same importance and consideration he’d give to a world leader, he’d advise me. He encouraged me to see more and do more — and do more well.” 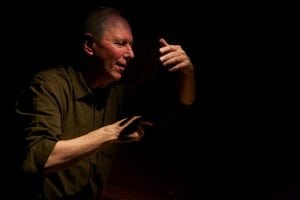 Shea, like others, listed Stewart’s assorted personas: “A writer, a musician, an author, a publisher, a conductor, a director, a presidential advisor, a husband, a father, a friend, a fireman — a fireman!” Stewart served in the volunteer Cold Spring Fire Company No. 1. “I’ve never known a person like him. He took the talents he had and not only used them but multiplied and shared them,” Shea marveled.

“Not one of us imagined this time would come so soon, a time when we could no longer wonder what was next, what would be the next surprise, the next treasure Gordon would provide in a seemingly endless trove,” Shea said. “Now that time has come when we can no longer wonder ‘What is next?’ … Now is the time for thanks and reflection — for thanks for improving our lives, for bringing so much beauty to this community. Gordon was my friend and I will miss him more than words can express.”

Given Stewart’s propensity for shaking things up, he added, “I’d say the afterlife is in for some big changes!”

About four years ago, artistic director, TV-series writer and Cold Spring resident John Plummer found himself recruited by Stewart to join World’s End Theater, a new Philipstown-based troupe. This past September, Stewart tapped him again, to deliver a eulogy at the service he was already planning for the days after his death. “Despite Gordon’s special gift for staying long past the scheduled end time of the meeting, he has now departed,” Plummer observed.

Like Shea, he highlighted Stewart’s generosity in mentoring him in numerous ways — in short, in life itself. “Gordon is, quite simply, great,” in the Buddhist sense of “the greater self,” Plummer said. “Gordon suffered much and frequently for others’ sake. He suffered the attacks of the foolish; he suffered the ignorance of many,” as well from his own physical limitations.

“But he never met a suffering he couldn’t transform into joy. Gordon was the people’s companion. He is immortal, and fathomless, and he is here,” in Messiah, The Paper, in everything Katy does in her life and in the culinary creations of Zanne (a food editor and gourmet cook), Plummer said. 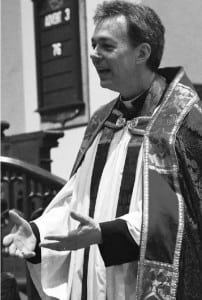 Rev. Shane Scott-Hamblen at the service

In his sermon, Rev. Shane Scott-Hamblen, St. Mary’s rector, spoke of his friendship with Stewart, which began relatively late in Stewart’s life and continued for long months as he quietly battled disease. Scott-Hamblen noted that Stewart, son of a 19th-century Calvinist minister, had always been wary of religion.

Yet the skeptic from the staunch Presbyterian family and the Episcopal priest grew close, as “this journey he asked me to go on with him” unfolded and Stewart pondered what lay ahead. “It was honest,” Scott-Hamblen said. “It was real, and it was big — as with everything with Gordon. It was a beautiful journey, and unexpected, but something holy was at work and I see the fingerprints of God.”

Beginning with a prelude of Make Our Garden Grow from Leonard Bernstein’s Candide, by vocalists and instrumentalists, the memorial service interwove magnificent outpourings of music with the eulogies and the prayers of an Episcopal service. Violinist Rachel Evans performed the solo Largo from the C Minor Sonata by Bach, and Ronald Madden, bass, sang the solo The Trumpet Shall Sound from Handel’s Messiah, accompanied by Butch Barnard on the trumpet.

Courtenay Budd, soprano, and James Ruff, tenor, joined Madden in providing the classical vocal touchstones of the service. And at the beginning and end, the congregation lent its voices, too, on the hymns Lord of All Hopefulness, which uses a traditional Irish melody, and Sing With All the Saints in Glory, derived from Beethoven’s Ode to Joy. Besides Barnard and Evans, Rachel Handman, violinist; Dr. Cynthia Ligenza, violist; and Christine Gummere, cellist, took part, along with John Drew, St. Mary’s music director. On the lawn before the service, a kilted Seth Gallagher, an instrument-maker and former mayor of Cold Spring, played poignant Celtic airs on his bagpipes in tribute.

Lined up outside the church, members of the Cold Spring Fire Company saluted as the service ended.

Attendees included New York State Assemblywoman Sandy Galef, Town Councilors Dave Merandy and Nancy Montgomery, Village Trustee Stephanie Hawkins, members of other town and village boards, theater personnel, at least one former White House staff member (besides Hertzberg), Stewart’s relatives and scores of individuals from across the valley, if not the country, who slipped into the church unobtrusively and paid their respects to the man who, in Shea’s words, “brought his whole world to this small town.”