The clock is ticking. That was a central theme as Philipstown senior citizens met with Putnam County officials on Saturday (Dec. 13) for an update on the status of a proposed senior citizen center planned as part of the redevelopment of the former Butterfield Hospital. 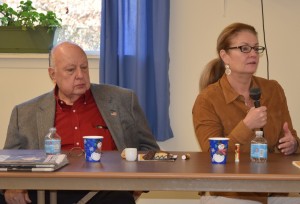 Garrison resident and president of Fox News Roger Ailes also attended the hour-long session held at Chestnut Ridge. Ailes was awarded a $250,000 prize by the Bradley Foundation in 2013 and has pledged the money to the proposed senior center along with a personal, matching donation.

County Legislator Barbara Scuccimarra kicked off the meeting, saying, “The clock is ticking,” and added, “We have to step on the gas to get the project moving.” The senior center is part of a larger multiuse project at Butterfield proposed by developer Paul Guillaro. It is now undergoing site plan review by the Cold Spring Planning Board and Historic District Review Board.

‘The money is there waiting for us’

Ailes’ wife, Elizabeth, publisher of the Putnam County News and Recorder, explained why time is of the essence. In June of this year, she said, the Internal Revenue Service approved the Ailes’ application for creation of a foundation as the means for conveying the $500,000 pledge to the new senior center.

“The check was deposited in November,” she said, adding that the Bradley Foundation requires that the funds be dispersed to the senior citizen center project by the end of 2015.

“The money is there waiting for us,” Roger Ailes said, explaining that he decided to donate funds to the senior center because of memories of having to put his grandmother “into an old folks home” in his native Ohio. His family, he said, didn’t have the financial resources to do otherwise. “That has haunted me for 50 years,” he said.

Roger Ailes referred to the abandoned hospital as “the monstrosity across the street,” commenting to the seniors in attendance, “It wasn’t a monstrosity when you were kids.”

He said that the decaying structure is such a poor gateway to Cold Spring that it discourages spending and development but that the Butterfield project will be a “tremendous uplift to the image” of the community. “We need that,” he said. “We need to work with people we don’t agree with.”

On the right track

Putnam County Executive MaryEllen Odell expressed optimism about the status of the proposed senior center, which would see the county lease space at the Butterfield rather than build its own facility. 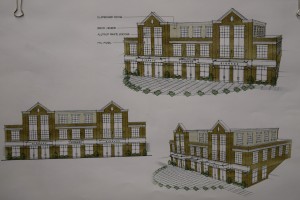 “With the new legislature, I really believe we’re on the right track,” she said. “I like that the clock is ticking,” she said, indicating that the deadline will only help move the project forward. Echoing Ailes, Odell said that it is time for those in government to “put aside their differences and look to the greater good.” She also suggested that monthly or quarterly meetings will be held with Philipstown seniors to provide them with up-to-date information.

Commenting that the Butterfield project can be an excellent example of a public-private partnership, Odell told the seniors, “It’s extremely important to have your input,” and said that arrangements will be made to provide local seniors with transportation to key meetings of the Putnam County Legislature early in the new year. The senior citizen center will be discussed and voted upon at that time.

Odell was asked by an audience member if she thought the legislative votes were there to support Putnam County’s leasing of space at Butterfield. The county executive said she believed that is the case. “There are legislators who support the project,” she said, but while not naming names, also commented, “There are legislators who don’t think globally. They’re not doing their homework. They’re not representing the county as a whole.”

Odell urged the audience to “pay close attention. You’ll see who is trying to derail” the project. She said she hopes that by the time of her State of the County address in March, she will be in a position to “make a very proud announcement” regarding Butterfield.

Prior to the meeting, The Paper asked Scuccimarra if the proposed senior center might also serve other community functions as has been discussed in the past. “Why not use it for other purposes?” she responded. “That idea is not dead,” she said, adding that the facility could help meet the need for a youth center.

2 thoughts on “Seniors Updated on Butterfield”