When 25-year-old William Bennett and his wife Louise presented their 5-month-old son William with an ornament, a gift to help celebrate the infant’s first Christmas, they could not have imagined that their small act of kindness would prompt a news story more than 100 years later. But it did.

Born in Trenton, New Jersey, in 1876, William Bennett Sr. was a tugboat captain with the Dalzell Towing Line, where he helped the large ocean liners of that era dock in New York Harbor. He married Louise in 1900, and the young couple moved into their home next to the Brooklyn Bridge. 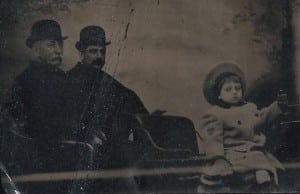 A very young William Bennett is pictured here holding ”the carrot” circa 1903. (Photo courtesy of the Hamel family)

William Jr. was born in 1901, and later that year the young parents gave their son a Christmas ornament — a gift destined to become a family treasure and the source of yuletide conversation among their descendants for generations to come. The ornament was an orange, velvet carrot.

William Bennett Jr. moved to Brewster shortly after the Second World War. After his death in 1949, “the carrot” — as it is simply but reverently referred to within the family — was passed on to his niece, Carol Hamel, a resident of Putnam Valley.

“I always find it interesting when looking at faded black-and-white family Christmas photos from decades ago … that somewhere on those trees … is the carrot ornament we’re fortunate enough to still have,” Carol said. “I have cousins who would love to have it, but I’m the oldest,” she said, a hint of mischief in her eyes. 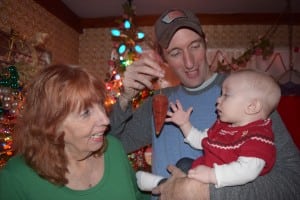 Eleven-month-old Shaylee Hamel, with her father Bob Hamel and her grandmother Carol Hamel,  already seems fascinated by ”the carrot.” (Photo by M. Turton)

She said that when relatives visit over the holidays, the first words uttered are always the same: “Where’s the carrot?” She confessed that when the relatives depart, “I check to make sure it’s still there!” 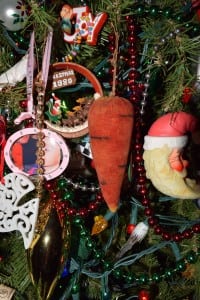 “The carrot” has been a treasured conversation piece for 113 years. (Photo by M. Turton)

Carol and her son agree that the carrot’s monetary worth doesn’t warrant an appearance on Antiques Roadshow, but that does nothing to diminish its value to the family. Bob even said, somewhat seriously, that at one point his mom worried about who the carrot would eventually be passed down to. “I had to have a family so that someone could inherit the carrot!” he said.

The Hamels also have a large, gold ball, a Christmas tree ornament that they think is as old as the carrot. Of considerable weight, it was meant to be placed on the lower part of the tree to help hold the branches down. The family definitely treasures it as well, but as Bob puts it, “It’s just not as good a story.”

The carrot’s Christmas past and Christmas present are secure, and its Christmas future also seems to be in good hands. “I’ll have the carrot someday, and then I’ll pass it on to Shaylee,” Bob said. “Then we’ll just have to keep it going for another 113 years.”

One thought on “This Ornament Has History”