“An oyster, that marvel of delicacy, that concentration of sapid excellence, that mouthful before all other mouthfuls, who first had faith to believe it, and courage to execute? The exterior is not persuasive.” ~ Henry Ward Beecher, Eyes and Ears

That’s one way to look at it, and then there’s this:

What is the prodigal son to do when confronted with a culinary gauntlet being lobbed by a hungry and obviously excited nonagenarian (and her octogenarian “baby” sister who was the actual supplier of said bivalves)? You might think this is a somewhat unusual challenge, but that’s how my people rock the holidays in South Louisiana.

Mom, who held down a full-time job as a teacher and librarian while raising five children and never had much of an inclination to the culinary arts (herself the child of a master, my grandmother), is entitled to such demands. She is however, an enthusiastic and unrepentant shellfish connoisseur and rapacious epicure of the stripe found only in Bayou Country.

And as the progeny of such bloodlines I am neither threatened nor intimidated by such provocation — I say, let the games begin! For one in the family who actually does love to cook, this is a typical welcome for my too-infrequent visits home and one I gladly accommodate.

We’ve done fried oysters: oyster po’boys, oyster spaghetti, a Hangtown Fry (a traditional San Franciscan gold rush–era omelet featuring oysters and bacon), an oyster frittata. In addition to the requisite few being sluiced down raw, there was an animated conversation on the potential merits of oyster pizza — fried first, of course, seasoned with tasso, perhaps? You get the picture. …

My podno and New Orleans–based chef Frank Brigtsen had recently shared a recipe for his mother Ernie’s oyster-bread dressing as a tribute to her in the New Orleans’ Times-Picayune, and while I am partial to such abracadabra, especially around the holidays (there is nothing like a good oyster dressing with a roast turkey, goose or slab of beef) the lady of the house has suggested Oysters Mosca. 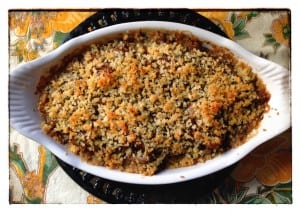 Mosca’s is a legendary family-run Louisiana Creole-Italian restaurant of the type that food writers (Calvin Trillin, Jane and Michael Stern) drool over — out of the way, rumored mob ties, physically charmless and fully genuine and authentic. Oysters Mosca (also called Oysters Italian style) is a signature dish, “composed” (although they would never use that term) of oysters in a mixture of sautéed onions, garlic and spices and baked with a generous dusting of breadcrumbs and a bit of Parmesan cheese.

There is absolutely nothing wrong with this dish. But, never one to leave well enough alone (“It’s not done ’til it’s overdone!”), the second time I proceeded to make this dish in a week (a gallon of shucked oysters is a lot of oysters) I was reminiscing (or maybe just fantasizing) about a combination of oysters and artichokes from somewhere in my forgotten past, and the accompanying recipe is the result of that rumination.

My major deviation from the Mosca’s seasoning is the substitution of a splash of soy sauce as a replacement for a classic brown French stock, but if you happen to have some lying around, be my guest. There is a bit of subtlety lost but not as much as the effort required to get there displaces.

This makes a great appetizer or side dish and is rich and elegant enough to make a meal in itself accompanied by a salad and some crusty bread. (I should note that Adam’s Fairacre Farms usually has shucked oysters on hand and given a day or two will get quantities, so a call beforehand is recommended.)

Which is just what we did and apparently it was enough of a success for she-who-never-cooks to request the recipe. So here it is, Mom. Merry Christmas.

Serves 4 as a side dish

4 tablespoons unsalted butter (plus a bit for the gratin dish)

Heat 2 tablespoons butter and 3 tablespoons of the olive oil in a large skillet or sauté pan. When hot, add onions and cook for 3 minutes. Add garlic, cook for another minute and add celery, oregano and basil. Cook for another two minutes and add artichokes, stirring to warm through (about a minute).

Add ½ cup of the reserved oyster liquor and the soy sauce (to taste) and cook on medium heat to fully cook the artichokes, about 5 minutes. You want the liquids to reduce but not dry out completely, so add additional oyster liquor as necessary to keep it moist.

When artichokes are cooked and liquid has reduced, gently stir in oysters until just incorporated and remove from heat. Stir in 1 to 2 tablespoons of the breadcrumb mixture. Gently spoon the oyster and artichoke mix into the prepared gratin dish.

Sprinkle enough of the remaining breadcrumb mixture over the dish to just cover and bake on the center rack of the oven for about 30 minutes, until top is just barely browned. Check after 20 minutes and every 5 minutes thereafter. Remove from oven and serve warm.