The holidays are a hectic time for everyone, but no matter how intense your last holiday gathering was, there’s a good chance it probably didn’t involve four separate security checkpoints.

Not so for Rabbi Brent Spodek of the Beacon Hebrew Alliance. Spodek and his wife Allison, a professor of chemistry at Vassar, were invited to celebrate Hanukkah at the White House last week on Wednesday, Dec. 17, as representatives of Beacon and the Mid-Hudson Valley. The invitation came shortly before Thanksgiving, even though Spodek still isn’t entirely sure why they were selected for this honor. 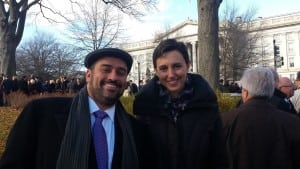 After passing through the aforementioned quartet of checkpoints, Spodek presented one of the Secret Service agents witha gift for the president: a miniature replica of the giant menorah made out of bicycles that is currently installed at the park on the corner of Main Street and Route 9D in Beacon.

The replica was created by Ed Benavente, the same sculptor who created the giant menorah itself as well as the bicycle Christmas tree that stands in the same park (see the Philipstown.info story from Dec. 21).

“The transformation of old bicycles into new art is a symbol of the transformations we are capable of, working together,” the Spodeks wrote in a letter to the president that accompanied the gift. “We are deeply honored to represent our communities at the White House, and hope that when you see this menorah, you will think of the progress this little town has made and the progress of which this great nation is capable.” 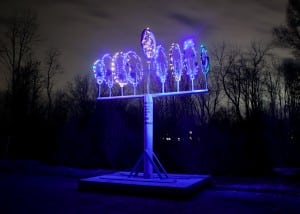 With the gift in good hands, the Spodeks followed the crowds into the East Wing of the White House for a kosher dinner. Spodek then proceeded into the Portrait Hall to hear the president speak, as a few hundred people all angled to be close to the podium. “Imagine if a mosh pit erupted at a Yo-Yo Ma recital at Carnegie Hall, and you’ll have a sense of things,” Spodek wrote of the event.

After a speech by the president and the lighting of the hanukkiah by Rabbi Bradley Shavit Artson of the American Jewish University in Los Angeles, Spodek was able to share a brief moment with the first lady. “There was a very large Secret Service agent between us, but I told her that the Jewish community and the entire town of Beacon, New York, sends its love,” Spodek wrote. “She patted her heart and blew me a kiss and I acquitted myself by not fainting on the spot.” 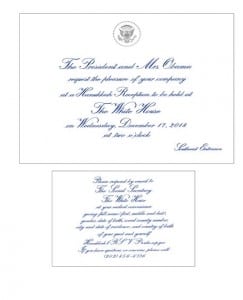 The invitation to the event

Afterwards, Spodek reflected on the remarkable journey that the Jewish people have had in America, from being once publicly deemed as separate from the “real” America to now being celebrated in the most hallowed halls of political power.

“To stand in the White House and see the president of the United States stand with a rabbi and chant Hebrew prayers felt quite literally to be a glorious miracle,” he wrote.