On Sunday (Dec. 21), admirers of classical music, Gordon Stewart’s genius, St. Mary’s Episcopal Parish — or all three — jammed the church for Handel’s Messiah, which Stewart led in the same place in 2013 but which this year went on without him, 25 days after his death.

Featuring soloists Gabriela Mikova Johnson, soprano; Steven Brennfleck, tenor; Nicholas Tamagna, countertenor; R. Frank Madden, bass; a 24-voice chorus; and a 21-member orchestra, as well as an empty maestro’s podium denoting the loss of Stewart, the concerts packed the church, which holds about 250 people, for each of two performances. 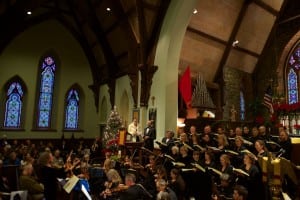 Proceeds from the ticket sales go to St. Mary’s, a historic but financially strapped congregation in the heart of Cold Spring, and the Philipstown Food Pantry.

A former White House speechwriter, business executive, volunteer firefighter, art connoisseur and founder of Philipstown.info and its weekly print edition, The Paper, Stewart also was an expert conductor and pianist.

In introducing the performances, the Rev. Shane Scott-Hamblen, St. Mary’s rector, described the teamwork that made the Messiah performance possible. Stewart, “a classical and frustrated Viennese-trained musician had a big dream on his bucket list, and a poor but welcoming parish desperately needed funds,” he said. “Both would be able to have their dreams realized” through the productions. Stewart and Scott-Hamblen also became close friends as Stewart battled illness.

The priest noted that in the 2013 concerts, when Stewart took a seat while the soloists sang, it was in part a salute to them but also “because he knew he was dying of emphysema and he needed to catch his breath, but he didn’t want the public to know. He knew at this concert last year that he was dying.”

St. Mary’s subsequently installed a plaque in his honor, and that gesture and Stewart’s memories of the performances “were so poignant to him and us,” Scott-Hamblen added. “It was a rare thing to see Gordon cry. He knew he will always be remembered here.” 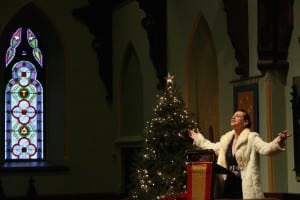 A solo during the performance

Just as Scott-Hamblen praised Stewart, the latter’s widow, Zanne Early Stewart, paid tribute to concertmaster Rachel Evans, a Garrison resident who worked with Stewart in creating the 2013 and 2014 performances and carried on alone in his absence. This year’s concerts “would not have come to pass” without Evans, said Early Stewart in a statement read by Scott-Hamblen.

Early Stewart explained that “one of my great pleasures over the past few years” was witnessing the collaboration between her husband and Evans, a violinist.

“I, who don’t ‘speak music,’ may not have understood all of their vocabulary, but the communication was unmistakable: pure joy. These performances are dedicated to Gordon,” Early Stewart concluded, “but it is Rachel’s dedication to him and to the music that allow us all to be here today. Thank you, Rachel, for the grace and humor that have brought the 2014 Philipstown Messiahs to fruition.”

A recording of the 2013 performance is available at Amazon, iTunes and CD Baby as a CD or download.

One thought on “Messiah Draws 500 to Benefit St. Mary’s and Food Pantry”