Few literary clubs in the U.S. can boast of a 120-year history as rich and diverse as the one at the United States Military Academy at West Point.

The West Point Ladies’ Reading Club (LRC) was founded by Mrs. Lusk in 1894, a time when women were only referred to by their husbands’ titles and typically didn’t have access to a formal education like most men did.

Despite the confines society placed on them, 16 women from West Point came together to form one of the oldest continuous literary clubs in America. With a strong desire to educate themselves on everything from Greek mythology to world politics, these women came together to empower and teach one another in the comforts of their own homes.

Like much of West Point, the LRC is steeped in tradition and still functions in many ways as it did over a century ago. A new theme is still agreed upon every year, and members select a book of their choosing and take turns presenting their selection to the group.

Once a year, members also participate in a group read, where everyone reads the same book and discusses it together. Field trips have always been an important part of the club; in the past members would take theater trips to New York City. Current members enjoy visiting local historical sites, such as Sunnyside Manor and Mark Twain’s house. 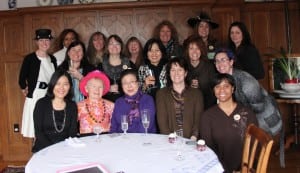 “I love to think that this club has been handed down through the generations to the current group of West Point women, who are trying hard to keep the traditions alive, while still adding some modernity,” said LaNon Neary.

Neary, who is in her second term as president of the club, looks forward to the annual birthday luncheon, a tradition where members meet to celebrate the anniversary of the club by listening to guest speakers and enjoying food and fellowship.

“I am always overwhelmed by the history of our group during this celebration,” she said.

Darlene Johnson, who has been a member for nine years and is currently in her eighth year as club secretary, looks forward to the annual “Love Feast” and said it’s a wonderful tribute to a woman who was an integral part of the club. Each May, the Love Feast is held on Constitution Island, in honor of Anna Bartlett Warner, one of the founding members who lived on the island with her sister, Susan.

Warner was the first honorary member to join the club; while not a military spouse, she was actively involved with West Point and taught Sunday school to the cadets for 40 years. Warner and her sister were both prolific writers and had 106 publications between them, including the famous “Jesus Loves Me,” which was originally published as a poem.

Preserving traditions has always been an important part of the LRC, but like the changing world around them, the club has in many ways evolved, too. Yearly dues have increased from $0.25 to $15. Advances in technology allowed greater freedom in research and writing, as well as the ability to preserve club history. Topics and themes varied greatly throughout the years, reflecting the changing times, advances in science and technology, and personal interests.

Some years were darkened by the shadows of war. During World War II, very little was recorded and meetings became less frequent. Time was spent helping the war effort and adjusting to life during wartime with food shortages, gas rationing and disaster preparedness. Annual events were cancelled and the money instead went to the Red Cross. The LRC was a big supporter of the Red Cross, donating much of their time and money whenever possible.

“Socializing is always important … but there is less focus on the intellectual side than in the past. Our officers addressed this and we continue to seek a good balance between past tradition and current needs and realities,” she said.

Perhaps one of the biggest changes the club has undergone is the selection process for membership.

“In the beginning, you had to be handpicked by members, and the group remained very homogenous,” Johnson said. “Over time, many in the West Point community grew to view the club as very exclusive and secretive.”

The nomination process was very elaborate, and by the 1960s women on post viewed the selection process as a popularity contest. Women nominated had to have five members sponsor them, and voting was done by ballot. As of 1947, all the women’s husbands wore the rank of lieutenant colonel or above, with the exception of two majors. Maj. Gen. D.V. Bennett, superintendent of USMA in 1966, wrote to the club suggesting they open it to all who were interested. Shortly after, everyone was free to join.

Two things time has not altered in any way are the friendship bonds formed and a continued appreciation for literature.

“I enjoy the entire package, really — learning about new books and ideas among women who represent a wide range of ages and experiences, along with wonderful friendships,” Pojman said.

“Being in the LRC has enriched my life in many ways,” added Neary. “It has led to many new friendships … and I am always reminded by these [book] presentations that you truly cannot judge a book by its cover … this club has encouraged me to break away from my usual type of book.”

Johnson echoed this sentiment. “The LRC has made me open to more book genres than I was before and has broadened my horizons,” she said.

Neary and Pojman agree that it is always fascinating to see what books other members choose, and Pojman enjoys discovering the variety of ways a particular theme is understood and interpreted by members.

Neary added: “I may think I know someone, but then she will choose a book that I never would have expected her to. I love when new pieces of my friends are revealed to me in such ways.”

These strong bonds of friendship, along with a deep respect for preserving the past and willingness to evolve, are what keep this group thriving and strong. The ever-changing group of diverse and intelligent women continues to build upon an already rich history, and likely will continue to do so f0r many more years to come.