Members of the Putnam County Legislature last Monday (Dec. 15) agreed on the need for a county senior citizens center in Cold Spring, but scrapped over related issues, such as the fate of the sheriff’s Nelsonville substation and the adequacy of internal communication on county plans at the Butterfield redevelopment.

Butterfield came up two hours into a meeting in Carmel of the legislature’s Physical Services Committee, after Legislator Roger Gross had sent a memo objecting to reviews by Legislator Barbara Scuccimarra and County Executive MaryEllen Odell of floor plans for county space at Butterfield. 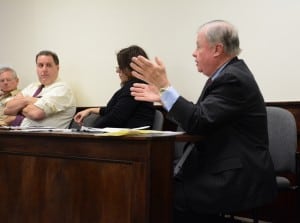 Albano began the debate by saying that county plans remain unsettled regarding Butterfield, where Odell proposes to not only put a senior center but offices, or auxiliary offices, of some county departments.

“Basically we’ve got to get a lot of information” in coming days and “to try to figure out what to do,” Albano said. “We know what monies we have available already” but must “try to hammer down all the numbers and stuff. We’re looking at around 6,000 square feet and the more information we get the more we can bring to the discussion” in the legislature.

Questions about DMV and more

Gross said that after he sent his memo raising questions, to his relief he learned that the Odell-Scuccimarra look at floor plans involved only a senior center and auxiliary quarters for the Putnam County Sheriff’s Department, “where we’re all on board,” not space for general county offices.

But he also stressed the need for working with the legislature. He explained that officials in the Town of Southeast were asking “is the DMV [Department of Motor Vehicles] going to have longer lines here because of DMV over in Cold Spring siphoning off staff? I said, ‘I don’t have these answers,’” Gross remarked. 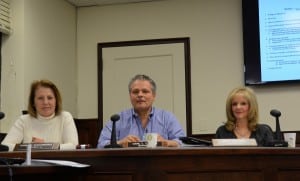 Referring to the county’s fondness for invoking “process,” he added that “I do want the process [followed] so we all know what’s going on. I want to make sure the legislature is on board … because we’ve been out of the loop on some things in the last three years. This is critical: the cost and the amount of personnel and what kind of services” the county brings to Butterfield. “I’m not opposed to the services” but want the legislators involved, he told his colleagues.

Albano emphasized that “the big thing is the senior center and the sheriff, to have a presence over there” in Philipstown. “That’s our priorities.”

Nacerino, the legislature’s deputy chairperson, also objected to steps taken by Albano and others without notification of their peers. “To find out there’s been communication behind closed doors or in separate meetings comes as a surprise. I think it was well intended, but I think a lack of communication existed. Unbeknownst to us, conversations were taking place. We’re not saying there’s no merit in that overture. We’re just saying to the best of our knowledge no conversations were taking place” when in fact they were occurring, she said. “We should be discussing this as a group.”

Apologizing for his handling of his meeting with Guillaro, Albano characterized it as an attempt at data gathering to aid legislative study. “My intention was to start getting more information so we would have stuff to look at,” he said.

Scuccimarra, Philipstown’s legislative representative, said her own work “was in no way meant to be not having everybody in the loop. It was just starting the ball rolling. We’re concentrating on the senior center right now.”

The derelict Butterfield Hospital has yet to be demolished and new construction has not begun. However, according to Scuccimarra “space is going” and Guillaro “has two floors leased already,” though the identity of any lessee remains unknown. Nonetheless, the occupant is not the U.S. Postal Service, she said. “The post office isn’t a ‘go’ yet” at Butterfield. They’re still looking at other spaces.”

Like Nacerino and Gross, Legislator Dini LoBue criticized a lack of communication. “I didn’t know that anything definitive [had been determined], that there was a final decision made that the senior center is going into Butterfield and that the sheriff would have defined offices there,” she said.

She said the legislators concur on adding two officers to work out of Philipstown, but she reminded everyone of the recent upgrading of the old Nelsonville firehouse for the Sheriff’s Department. “We put a lot of money into the Nelsonville station,” LoBue said. “We need to be very careful what we’re saying tonight because comments were made that give the appearance that we are definitely building a senior center in Butterfield and definitely putting sheriff’s offices in Butterfield.”

Albano responded that the county is “receptive to those ideas” about sheriff’s quarters at Butterfield but that “nothing is a done deal” in regard to placing county agencies there, beyond a senior center. “Nothing is done. If we have space there, if that makes sense, that was the thought” — to put other county offices at Butterfield as well, he said. “There’s nothing definitive at all at this point.”

Gross summed up the apparent, fragile consensus: “I just think we all agree a senior center is needed” in Cold Spring, “and it sounds to me like it could be at the Butterfield site. And we take it from there.”

One thought on “Legislators Agree on Senior Center”