The proposed Butterfield development, a residential and commercial building project planned for Chestnut Street (Route 9D) in Cold Spring, is moving into the final stages of review by the two relevant village boards.

While still some months away from a final approval decision and although a few public hearings still need to be held, it is evident after listening to a discussion by a joint meeting of the Cold Spring Planning Board and the Historic District Review Board (HDRB) Wednesday evening (Jan. 7) that few obstacles remain in the way of developer Paul Guillaro’s plans. 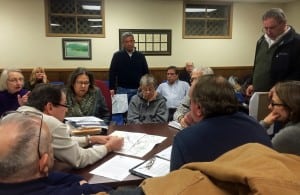 Those plans include 55 condominiums for people over 55, two commercial and/or municipal office buildings and three residential homes (along Paulding Avenue) on the site of the former Butterfield Hospital.

The boards have held joint meetings to facilitate consideration of issues that cross into the purview of the other appointed, volunteer board. At this latest meeting the board members discussed various concerns that brought attention to the safety of the site for occupants and visitors as well design elements speaking to both the aesthetics and the intended functionality of the project.

Discussion centered on the ultimate positioning of the two office buildings on the site as well several related issues. Both boards expressed a desire to have the office buildings situated a little differently than presently — turning them at slightly different angles and farther set back by a few feet from Route 9D. They appeared to agree on a single approach, for which Guillaro and his staff committed to provide formal design renderings at the next joint board meeting on Jan. 28.

The expected updated site plan for Jan. 28 might very well be close to the final document if the developer and his architect and engineers meet the concerns of the boards or provide acceptable alternatives to their suggestions. There was no evidence of any strong disagreement between the applicant and the boards.

The project will likely require at least two public hearings given requirements of state and village laws on site plan and subdivision approval.

Associated with the possible physical adjustment of the buildings’ locations are possible impacts to open green space, final number of parking spaces and the ability of emergency vehicles to navigate roadways, especially the ability to turn around corners or curves. On the last point it was emphasized by Chuck Voss, the planning board’s consultant, that the Cold Spring Fire Company will review any agreed-upon design plans to opine on emergency responder accessibility of the site.

Members lightly debated the relative merits of approaches to open space, especially a planned plaza area, and speculated on how residents, business owners and visitors might ultimately use the spaces. Karn Dunn, a Planning Board member, wondered whether people would really use a plaza or if it might turn into wasted space. Others, like Kathleen Foley of the HDRB said the use of the plaza “could be exciting if designed well.”

At one point Barney Malloy, Planning Board chair, inquired of Guillaro what he knew about the county’s plans for a senior center — how much space, what building, which floor, among the questions. Guillaro said he did not even know which building the county might prefer to house the promised senior center that Roger and Beth Ailes have pledged $500,000 for and which is expected to be county-leased space. The county legislature has not appropriated funding for any additional services at Butterfield.

The California-based seller of high-end prefabricated houses, Blu Homes, has withdrawn its application to the Planning Board to construct a model home and a sales office on the site of a former car dealership on Fair Street in Cold Spring. According to Molloy, local company officials said that after further consultation with headquarters it was thought more access to vehicular traffic and additional parking were needed than the Fair Street lot could provide. Molloy said the company indicated it was still interested in Philipstown sites but was probably not limiting itself to only one town.

Molloy also said he believed the application process at least had the result of getting the owner of the Fair Street site to fix outstanding problems with the state Department of Environmental Conservation, making the site more attractive to other businesses.