Pillows of puffy, steaming hot bread spilled over a platter at a recent dinner that my family enjoyed during the holiday season. A doughy menu addition and its creator arrived at the celebration just as we were about to begin the meal. The texture and shape of the bread looked familiar and I recognized the taste immediately. Fried dough — the food-stand favorite sold at so many of the powwows I’d attended years earlier as a teenager. As an interpretive Native American dancer with a traveling dance team, I came to know the bread simply as fry bread, and occasionally found it billed as a Navajo taco when smothered with beans or meat.

I learned to make the bread with the dance team, and the food operation served as a summer fundraiser for our travels. We’d sell out each time we set up a stand at one of our family-centered events. The world hadn’t learned of marketing through social media, but there was little need. We didn’t even need a sign on our food booth. The smell of the dough frying at a full boil spread widely and pulled prospective customers right to us. We kept our operation simple (thankfully, the health department never checked us out) and offered serve-yourself powdered sugar and honey along with the bread.

Once we sold out and closed the stand for the day, the dance team members, mostly teens, young adults and a parent or two, would head over to our dressing area (a patch of grass or gravel next to our used and aging Greyhound bus) and change into our costumes. Once fully dressed and embellished with beadwork, bustles and well-worn moccasins, we waited behind our canvas backdrop to storm onto the stage at the sound of the drum. In unison, we all mimicked our director, Frank. Dressed in a full Native American ensemble, meticulously crafted bead by bead, he would open our shows with a regular monologue that went like this:

“Good evening. My name is Frank Joachimsthaler. That is a full-blood name. Full-blood German.” 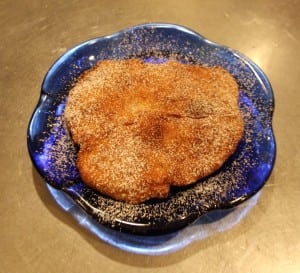 The crowd rolled with laughter and Frank loved it. He delivered this opening line show after show, year after year, explaining that most of the team members were not Native Americans, though some were. He shared his deep respect for Native American people and their varied cultures with the audience, and once the beaters hit the drum, we joined him in song and dance for the next hour, moving and singing, always in a circle — the cycle of song, the seasons and of life.

But the source of our latest crispy-on-the-outside and fluffy-on-the-inside creation at the dinner celebration wasn’t of Navajo or Native American origin. Our gathering included a host of people with roots around North America and more than a dozen from an Albanian family. One of the family members from Albania arrived with the puffed and bubbled round bread pulled directly from the fryer. It’s certain that I added a few extra calories when I decided to allow the bread to bump everything green and lean from my plate, but it was a familiar food that I couldn’t resist. I stopped at one piece but probably consumed my fat count for the weekend.

My kids also discovered their own fried dough at summer camp, but it wasn’t shaped into flat rounds. Staff members would roll the dough into small balls, like doughnut holes, deep-fry them and coat the fried dough in a blanket of powdered sugar. 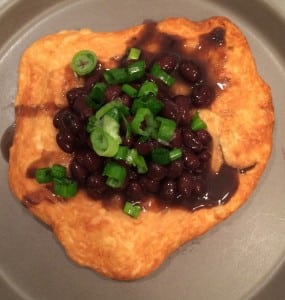 One of the Albanian women at our dinner said her mother had prepared fried dough forever. With the origins of cultivated grain traced back to the vicinity of their native homeland, “forever” sounded convincing. The variation that I recall has been a staple with Native Americans in recent generations. According to the South Dakota Legislature, the state designated the beloved deep-fried dough as its official bread in 2005.

A serving of fry bread, similar to the fried dough found at state fairs and festivals as well as certain Albanian family gatherings, may be a little less than healthy, but for those who can tolerate gluten and lard, it’s a memorable feast. Made in your do-it-yourself home fryer, it’s a hand-flattened creation perfect for occasional breaking and sharing within your own circle.

Place dough on lightly floured surface and hand-flatten gently into a mound. Cover and rest dough for 30 minutes. Divide dough into 8 to 10 evenly sized portions. Gently work each portion into a 5- to 6-inch circle, handling dough minimally. Some fry bread portions are double this size. Size your batch to your liking.

In fryer or large pan, heat 2 inches of vegetable oil to 375 or 400 degrees. The hotter the oil, the shorter the cooking time. Place dough one piece at a time into oil and cook on each side up to 2 minutes for desired golden crispiness, turning only once. Remove each piece of fried dough with tongs and place on baking sheet layered with paper towels. Keep cooked bread in warm oven until final batch is completed.