Attacks may have occurred in three waves

A spokesman for the Metropolitan Transportation Authority Police (MTA) confirmed Monday morning (Jan. 12) that several cars at the MTA parking lot in Cold Spring had their tires slashed over the Jan. 10–11 weekend. Police provided no further details at the time, pending their ongoing investigation. The spokesman indicated that the parking lot is monitored by security cameras.

One of the victims, Garrison resident Lisa Mihalik, had been in New York City on business for two days. When she returned to Cold Spring via Metro-North around 5 p.m. on Saturday, she found that all four tires on her car were flat. She also noticed that a number of other vehicles had suffered the same plight. By then, MTA Police had already been at the scene and had left a note on Mihalik’s windshield at about 4 p.m. 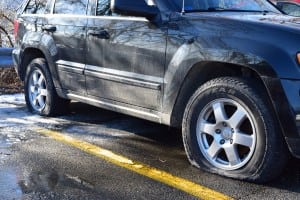 All four tires on this Jeep Cherokee were also punctured, part of recent vandalism at the MTA parking lot in Cold Spring. (Photo by M. Turton)

“I was so upset. I’ve never had anything like this happen before,” Mihalik told The Paper. “I suspect it probably happened overnight.” She commented that while the police report noted that her tires had been “slashed,” she said they were more likely punctured.

Mihalik said she phoned her husband who came to take her home, and that her car was put on a flatbed truck and taken to the dealer. According to her insurance company, four new tires will cost $1,200. “I have $500 deductible,” she said. “I hope that’s all my bad luck for 2015.”

She said that officers with both MTA Police and the Cold Spring Police Department (CSPD) had indicated there were no security cameras in the parking lot, but a follow-up call to the MTA Police office in Beacon confirmed that while there are no cameras on the train platform, there is one surveillance camera at the south end of the parking lot.

A second victim contacted The Paper and asked that his name be withheld. “This is so unsettling. I … can’t afford to be the target of someone like that,” he said. He said he parked his car in the Metro-North lot at 4:15 p.m. on Saturday. At that time he saw a car being taken away on a flatbed truck but thought nothing of it. He returned to Cold Spring from New York City at about 11 p.m. to find that two of his tires had been cut. Because his vehicle is all-wheel drive, all four tires will have to be replaced at a cost of $700.

“I felt violated, alone,” he said. “I thought I had been singled out somehow.” A member of the CSPD who was on the scene that night told him that his was the sixth vehicle to have its tires cut and that the first incidents had taken place the night before.

On Wednesday, Lt. Raymond Skopin of the MTA Police told The Paper that a total of 13 vehicles had tires cut over the weekend. That would seem to indicate that seven vehicles were damaged after the anonymous victim’s tires were cut sometime before 11 p.m. on Saturday. It also means that the vandalism likely occurred in three separate waves.

The anonymous victim was critical of police for not patrolling the parking lot more vigilantly after the first cars were damaged. “If they had simply kept a really close eye, I don’t see how the second and third rounds (of vandalism) would have happened at all.”

At least one other vehicle that had suffered four flat tires remained stranded in the parking lot as late as Tuesday afternoon. Skopin said that CSPD, Putnam County Sheriff and New York State Police are assisting MTA Police with the investigation.

One thought on “Car Tires Cut at Metro-North Parking Lot”