The Cold Spring Police Department’s contribution to monthly meetings of the Village Board normally includes only a brief written report summarizing recent police activity, but the CSPD was the focus of considerably more attention than usual at the board’s Tuesday (Jan. 13) session.

Toward the end of the meeting, trustees took up the question of whether or not to authorize hiring an additional police officer, a resolution Mayor Ralph Falloon said he supported. However Trustee Cathryn Fadde questioned both the need for and the timing of hiring another officer. When Falloon commented that scheduling issues in recent months, including one officer having to work three holidays, helped justify a hire that was already budgeted, Fadde responded, “Just because we have [the money] doesn’t mean we have to spend it.”

In a rather odd turn during the discussion that followed, Fadde said she had recently received correspondence at her home regarding the CSPD work schedule, including concerns about its fairness. When Falloon, who was clearly taken aback by the revelation, asked Fadde why she was receiving correspondence at home, she replied that the information had been left there anonymously.

Trustee Michael Bowman then pointed out that a personnel matter would be dealt with during an executive session later in the agenda and suggested that the hiring issue might be better resolved after that. The printed agenda indicated only that the executive session would deal with “the employment history of one particular employee.”

When the public meeting resumed after the closed-door session, the board immediately approved a “Separation and Release Agreement” with CSPD Officer Anthony Pupczyk along with his resignation. No reason was given for the action, but Pupczyk was arrested in October 2013 by the New York State Police after allegations he had repeatedly damaged a fellow Cold Spring officer’s car. Trustees then voted 3-1 in favor of hiring Officer Vincent D’Amato with Fadde the lone trustee to vote “nay.” Trustee Stephanie Hawkins was absent due to a work conflict.

CSPD is currently comprised of 13 part-time officers, including Officer-in-Charge George Kane. The department’s budget for 2014–15 is $422,620 including wages, pension contributions and support costs.

Tabled a week ago, the question was again raised regarding whether or not the village should pay all or part of a $7,693.75 invoice from Greenplan, the Rhinebeck-based consulting firm that wrote a successful grant application that resulted in the village receiving a $75,000 grant to update its zoning code. The firm submitted the invoice last November and recently also submitted a “late fee” request for an additional $350.

Greenplan had offered to draft the grant application at no cost to the village, with the understanding that it would be awarded the contract to do the zoning code update if the application were successful. After the grant was announced, the Village Board passed a resolution giving Greenplan the zoning work but later reversed its decision and granted the contract to another firm.

Falloon said that before he resigned former Village Attorney Michael Liguori had contacted Greenplan and that the firm was willing to consider a payment of $5,000 for the services it had provided. Bowman commented that his issue with the initial offer to grant Greenplan the work was that it came from Trustee Hawkins and not the Village Board.

William Florence, who is providing legal counsel to the board until a new village attorney is selected, supported that concern, stating that a single trustee cannot make a commitment on behalf of the entire board. He described the board’s July 25, 2013, resolution to award the work to Greenplan as “a contingency that didn’t come to fruition, so it’s zero.”

Trustee Fadde responded to that saying, “So let’s give them zero.” No contract was ever signed between the village and Greenplan. Florence advised the board not to pass a resolution on the matter that night and it was once again tabled.

Following a report from Greg Phillips, superintendent of water and sewers, trustees approved the awarding of contracts for work related to the upgrade of the wastewater treatment plant on Fair Street. Oakwood Environmental Associates will complete engineering for the project at a cost of $188,800. Spectraserv Inc. will install the new aeration system at a cost of $672,300. Fanshawe Inc. will undertake the electrical upgrade at a cost of $234,000. 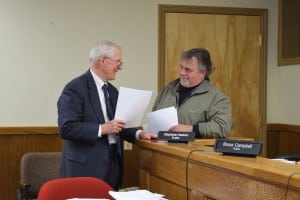 Attorney William Florence, left, with Water and Sewer Superintendent Greg Phillips during a break in Tuesday’s meeting, is providing legal counsel on an interim basis until trustees appoint a new village attorney. (Photo by M. Turton)

As part of his report, Phillips also asked Falloon to intervene in hopes of moving two long-delayed projects forward. “These large agencies hold us back,” Phillips complained. Falloon will write to the New York City Department of Environmental Protection asking them to expedite the village request to connect to the Catskill Aqueduct, a relatively simple project that must be completed before the village-owned reservoirs off Lake Surprise Road can be drawn down and repairs made to the dams there. The mayor will also contact Metro-North Railroad, whose cooperation is needed in order to complete the Market Street pumping station project.

Falloon recused himself from discussion of a project that will see homes on West Bank Street connect to the village sewer system. Falloon lives on the street, a private road. With the mayor out of the room, trustees passed a resolution establishing an escrow account of $1,450 to cover project-engineering costs, to be paid for by the street’s residents. They will also bear the cost of construction while the village will ensure that the connection meets the required standards.

Phillips and Bowman both commented that having homes on the street that are currently served by septic systems connected to the sewer system is a positive step for the village. Phillips added that normal maintenance will be required in the future since the new line will connect to the overall sewer system.

Those maintenance requirements will be spelled out in the final agreement between residents and the village. Interim counsel Florence will review the agreement once engineering for the project is completed by Oakwood Engineering, which will also review the project on behalf of the village.

Officer-in-Charge Kane reminded residents as part of his monthly report that the new number to call to determine if parking is prohibited on village streets due to ongoing or predicted snowfall is now 845-747-7669.

Questions submitted recently to the Village Board to be passed on to the New York State Department of Environmental Conservation regarding removal of coal tar in the area of the Cold Spring Boat Club will be the subject of a workshop to be scheduled in the near future.

Peekskill-based Wheelabrator Technologies informed village officials that in accordance with New York state law, manufacturers must now handle recycling of many types of electronic equipment including computers, televisions, cellphones and other devices. As a result electronic devices cannot be disposed of at the curb as part of regular recycling. Information is available at dec.ny.gov.