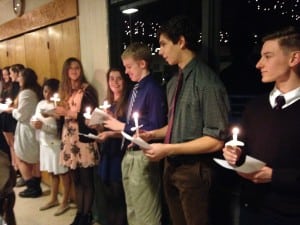 On Tuesday, Jan. 13, 37 Haldane students were welcomed into the high school’s chapter of the National Honor Society (NHS). Students gathered at the Taconic Outdoor Education Center for dinner, followed by a ceremony inducting the new officers as well as students.

Haldane High School math teacher and National Honor Society advisor Lou Sassano began the event by welcoming the parents and friends of all members, as well as the administration. Principal Brian Alm then took the stage to thank Sassano for his dedication to the society and discussed the significance of being a part of the NHS, urging students to consider the ideas discussed during the ceremony in their future endeavors.

Each new officer lit a candle representing the quality, and then the new members were called up one by one to briefly speak about the quality of their choice and light a candle, too. Everyone recited the National Honor Society Pledge, and afterward, concluding remarks were given by new Haldane Superintendent Diana Bowers.