Stepping into PomaRosa, the “vintage eclectic possessions” store now settled into its fifth year on Cold Spring’s Main Street, is encountering the recent past. The small store is filled with furniture, housewares, lamps, clothing, jewelry, artwork and more, all of it from the century just passed.

The store, which began its life across the street, occupying a space at Antiques Alley in its first year, is named because its mixed-bag contents echo the same variety of components found on a fruit very popular in owner Patricia Pomarosa’s (not her real last name, but the one she goes by) native Colombia: the tree that bears it comes from India, the external skin of the fruit is plum-colored, the inside is pink and it smells like a rose. 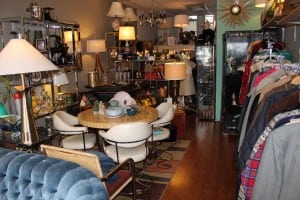 Vintage central: Pomarosa is home to clothing, furniture, jewelry, homeware, artwork, all from the 20th century

Pomarosa opened the original store, her first venture, after being urged to do so by a friend who was well aware of her love of design and furniture — particularly mid-century styles — and fashion. “It was such a big investment — of money, time, but he pushed me into it and told me not to be afraid.”

Growing up in Colombia, she studied journalism and communication. Her father had studied in the United States, and there was family here. Having been here on vacations, Pomarosa made the big move, deciding to stay in the U.S., in 1998. She described her first foray to New York City, which included her first subway ride from which she emerged to view “girls walking around with purple hair — I loved it; it was wonderful.” Eventually settling first in Putnam Valley, then in Beacon, Pomarosa, who had been a teacher, knew Cold Spring from spending time here on weekends. 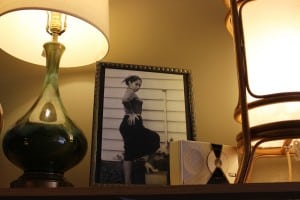 A display evoking an earlier era, at Pomarosa

Now, as in the beginning, an “I would like to have this in my house” determines what Pomarosa stocks; she locates her merchandise at auctions and estate sales and through word of mouth. “Now that I’ve been here for years, people call me and email me, offering things. We’re always looking for fun things for people to enjoy displaying; things that people can envision in their own house — objects that people can fall in love with,” she said. Not all of what is in stock is on display, and if customers express an interest in a particular style or era, Pomarosa is frequently able to provide or send images of other things they might like.

Pomarosa often gets attached to things in the store. “I think I’m not really ready     to let something go, and then someone comes in and wants it. I often ask people who buy things here to take a photo of where they wind up. I got a photo recently from a woman who wrote, ‘You can see the lamp is in a good place.’” 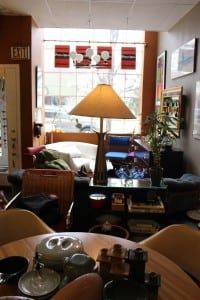 Pomarosa described her customers as largely from “Brooklyn, Manhattan and New Jersey and people who have just moved to the Hudson area” and said there are many repeat clients. “We always want to find the right things for people,” she noted. Age-wise they span the generations, from young couples into vintage to a woman in her 70s who purchased a leopard-print coat just last week — her first time ever in life buying something secondhand. Pomarosa described her prices as reflective of rents lower than those found in Manhattan and Brooklyn. “That’s one of the reasons we have customers return,” she said.

Pomarosa’s mother, Elsa, is more often than not in the store with her. Pomarosa described her as “my partner in crime — she’s always falling in love with things and telling me, ‘You have to get that.’”

The store’s busiest months are summer and fall; winter is the challenge it is to all Main Street retailers. During summer PomaRosa is open Wednesdays to Sundays, but during the winter months it is open on weekends only, plus on request.

One thought on “Vintage, Eclectic Possessions Are PomaRosa’s Specialty”