By Mark Wick and Alison Rooney

The best lesson-planner out there couldn’t have devised a more ingenious way to impart ecological knowledge to a classroom of sixth-graders. About a month into what has now turned into an extended and multilayered learning experience, a visit to Haldane teacher Mark Wick’s classroom was a window onto hives of excited student activity.

One small group was clustered around a whiteboard, conferring and posting data to it while another group stared fixedly at one of the tanks holding reptiles and amphibians lining one wall in the science and ecology classroom. A girl was determinedly drawing a colorful poster replete with frogs and bubble captions, while still more kids had research books open, scrutinizing them. No one looked bored or disengaged. 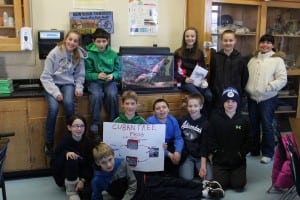 The sixth grade ecology class, posing around the tank containing El Duque.  (Photo by A. Rooney)

What was the educational magic producing this practically unreal classroom alchemy? It was “El Duque,” a fairly small, kind of beigy-brown frog, whose journey from parts unknown — but certainly far south of here — to the first-floor classroom that he now calls home, has propelled the transformation of these students into observational scientists in the making.

Here is the tale of El Duque, told by Wick, who teaches science and ecology, the latter a quarter-year rotational “special” class that each of the four sixth-grade classes slots into during the course of the year.

About six weeks ago, my friend Mandee texted me from her job as a manager at Home Depot in Cortlandt. She was bringing plants in from outside on one of those brutally cold days when all of a sudden, a tree frog jumped out of one of the plants. She asked me if I wanted to keep it in my classroom until the weather warmed up in the spring. Of course I obliged. When she brought it to my house, my initial observation was that it was a native gray tree frog, Hyla versicolor. Upon closer inspection, I started thinking otherwise. I noticed the patterns were slightly different, the toe-pads and eyes were slightly larger, and it was lacking the classic bright-yellow band on the inner thigh.

I then started researching what else it could be, knowing very well that it was not at all native to our area. I searched online until I found an image of a similar-looking frog. The caption on the picture said it was a Cuban tree frog. Well, how the heck could that be possible, right? So I started looking up information about Cuban tree frogs (CTFs), and as it turns out, they are a completely invasive species in Florida, and now parts of Georgia. They’re taking over and actually eating Florida’s native tree frog species. I then started piecing it together that perhaps the plants at Home Depot came from Florida and the CTF hitched a ride!

At this point I felt that I needed a second opinion, so I reached out to a few local biologists, herpetologists and some other nature-nuts like myself who might have some insight. One of these people was Ed McGowan, who I knew had a background with snakes and other local animals. He ended up forwarding my email to a guy named Al Breisch, a former herpetologist from the DEC. Al ended up writing back saying that it very well could be a CTF, as I had suspected.

Now it was time to bring the project to my ecology students and sort of start over with them. I had them do a ton of research, basically retracing the steps I had gone through on my own. We used the new Makerspace room and used the iPads to compare images of various North American tree frogs. All my students knew was that it was a frog that was found at Home Depot, and it was possibly a nonnative species. I divided my class into groups, each with a different job.

The ‘communications’ group reached out to more people who might offer some assistance, including Dr. Steve Johnson from the University of Florida. One of my students emailed Dr. Johnson a picture of our frog and a description of how it ended up in our classroom. Dr. J emailed back with confirmation of it being a CTF, and he was amazed that one made it all the way up to New York!

Another part of his response included something that really caught my students by surprise, and presented a somewhat controversial, but real-world issue. He wanted to know if we’d be willing to euthanize the frog, preserve it in alcohol and send to his lab where he would add it to his records. He also said he might end up putting it on display in the Florida Natural History Museum. This obviously stirred up some emotions, as the kids have become quite attached to our little amphibian friend. 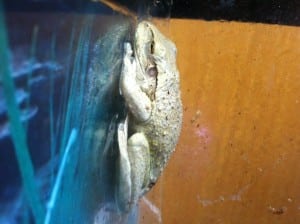 El Duque in the photo (taken by sixth-grader Emily Jones) that convinced Professor Steve Johnson of the University of Florida that he was indeed a Cuban tree frog.

It turns out that it is actually now illegal in New York state for students to euthanize a living creature. In a small Socratic session, kept to a minimum because emotions were high, with strong attachments to the now-named El Duque — called so in honor of Orlando Hernández, the Cuban-born Yankee pitcher from the ’90s, after Wick deflected a student’s suggestion to call him Fidel Castro.

A discussion was held posing the questions, “What if our school was located in Florida, where CTFs are considered pests? Would you feel differently?” A group determination was made that El Duque should be allowed to live out his natural life in his new classroom home (which could be five years or longer, in captivity), and then when he passed, he would, per instructions from Johnson, be frozen and sent to the researchers at the University of Florida, where he would become a part of science history: the first Cuban Tree Frog to officially be recorded as making it to New York state. 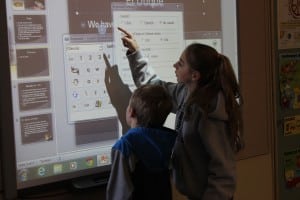 Two students make an entry on the El Duque timeline. (Photo by A. Rooney)

Wick showered the kids with questions: “Would he survive better in the wild or in our tank?” Multiple hands went up, with the consensus that threats like competition and bad weather present dangers for the frog in the wild. He pointed out to the class that he noticed changes in El Duque’s skin color lately, and threw it back to the students: “Who did the research on this and can tell us why?”

It was the students who researched the CTF’s natural habitat and tried to recreate some of the forested and high-humidity aspects of it. The kids monitor the number of crickets he is given (and since he is nocturnal, he doesn’t eat in front of them) and the number left the next morning to record his diet. Meanwhile, a film crew is documenting the whole experience. The class is “taking the reins on everything. It was a student who ‘found’ Dr. Johnson. There’s no set curriculum in ecology, so this fits perfectly,” said Wick. 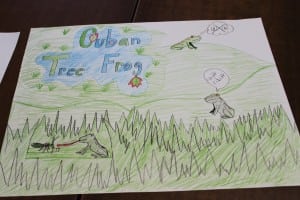 Guests have come to the classroom because of what has unfolded. Kali Bird of the Hudson Highlands Land Trust visited and did a presentation on invasives. For the students, this is memorable. One of them, Kevin Van Tassel, said:

It’s amazing that it could come all the way from Florida, perhaps without food and water, in the back of a truck. When we first got him he was jumping around, but he doesn’t do that anymore, probably because he’s getting what he needs, every day. I like learning this way because it’s a hands-on experience. I like hands-on experiences better than reading from a text in a book. Here you study the smallest details, like the brown spots on its back.

Seems it was one small hop for a Cuban tree frog, but a giant leap in learning for a sixth-grade class.