One basket was all that Haldane hoops star Peter Hoffman, standing at 999 career points, needed to join the 1,000 points club on the Haldane Wall of Fame, but he had to wait a few extra days due to inclement weather and game rescheduling to finally get his chance. 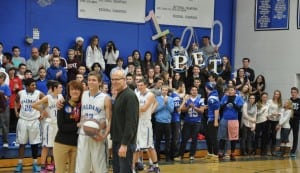 Peter Hoffman with his parents, Linda and Roger Hoffman

Hoffman planned his milestone basket with family and friends during that downtime and decided it had to be that one basket that says it all after a great run at Haldane High. The type of basket that brings down the house at the end of a tight game, only this basket was going to happen at the very beginning.

When the Haldane basketball team finally made its way out onto the Haldane gymnasium floor for the pregame warmups, you could feel the buzz in the home crowd that something special was about to happen, and very shortly. As the Blue Devils lined up for the opening tipoff against North Salem, all eyes were on Hoffman. 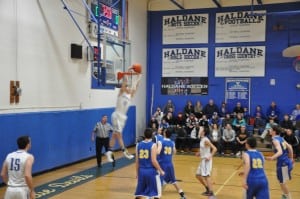 Peter Hoffman scores his 1,000th and 1,001st points of his high school career.

Haldane won the tipoff and before you knew it, Edmund Fitzgerald was delivering a perfect alley-oop pass to an elevating Hoffman, who slammed home his 1,000 and 1,001 points as the crowd erupted in cheers. The referees briefly stopped the game to recognize Hoffman’s tremendous milestone, as he was greeted by his joyous teammates, coaches and family with hugs and high fives.

Haldane went on to defeat North Salem, 71-47, with Hoffman leading Haldane with 21 points and 10 rebounds, followed by Fitzgerald, 10 points, 10 rebounds.