Who can resist the attraction of Goblin Market? The 1985 musical by Polly Pen and Peggy Harmon adapts Christina Rossetti’s fabulous 1862 poem about a transformative experience in the lives of two sisters, Laura and Lizzie. Everyone involved in the Depot Theatre’s winter main-stage production of the show fell quickly for its charms. They hope their audiences will share their awe at the story and the beautiful music and words through which it is told. 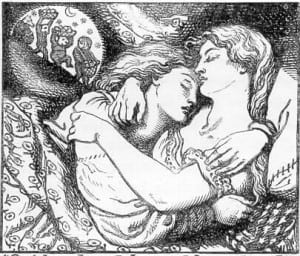 Woodblock print by Dante Gabriel Rossetti, frontispiece tin the first edition of Goblin Market and Other Poems by Christina Rossetti (1862)

Full of sensual images, dynamic meters and clever rhyme schemes, Rossetti’s poem tells of Laura’s seduction by “goblin merchant men” who dwell near the river and entice the girls to “come buy” their ripe, exotic fruit. Lizzie subsequently risks herself to save her sister from the consequences of eating the goblins’ produce.

The show has brought home to cast and crew the continuing relevance of this very old tale of desire, restraint, friendship and heroism. Pen and Harmon’s book and score for Goblin Market depend largely on Rossetti’s text, told in flashback by Laura and Lizzie after they have grown into proper Victorian women. 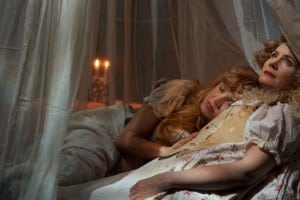 Featuring the well-known local actors Jenn Lee as Laura and Maia Guest as Lizzie, the Depot’s Goblin Market is directed by Donald Kimmel, also of Philipstown.

The production at the Depot Theatre fulfills a life goal for the principals. Lee has wanted to do the show ever since she saw the original production at New York’s downtown Vineyard Theatre. She took Guest to see the Vineyard’s revival in 2007, shortly after the two had met in the Hudson Highlands and become friends. They made a pact then to perform as Laura and Lizzie someday.

After years of allowing life, work and parenting to take precedence, Lee and Guest found a mutual opening in their schedules in February 2015 and agreed, “We have to do this, now.”

Lee’s previous acting credits include Broadway (Grand Hotel, Cosette and Eponine in Les Misérables, The Dead), off-Broadway (The Fantasticks, among others) and featured roles in productions by Philipstown’s own World’s End Theater, of which she is a founding member.

Guest, who trained in London, recently wrapped the third season of Granite Flats, a televised Cold War spy series, in which she shares the screen with Christopher Lloyd, Parker Posey and her son Charlie Plummer. Guest has appeared together with Lee in several World’s End and Depot productions.

Kimmel, another leading figure in the World’s End and Depot groups with three decades of directing and acting credits, had known of the little-known Goblin Market for several years, since he had considered staging it with his Beacon-based Flying Swine Company. Having worked with Lee and Guest in many dramas, musicals and staged readings, he was eager to direct them in their dream show. 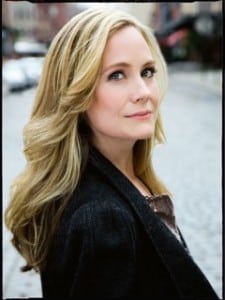 Scholars have studied Rossetti’s poem through Freudian, Marxist, Christian, feminist and biographical lenses, seeing the fruit as symbolic of sexuality, commodity culture or art and reading the story variously as a cautionary tale, a critique of socially imposed limits on women and an exploration of complex impulses and emotions.

The adaptation by Pen and Harmon turns the tale into a recovered memory of lost youth that becomes both traumatic and liberating. The score crosses historical eras to suggest the timelessness of the story: Pen sets Rossetti’s words to original music, but her score also weaves in fitting 17th- and 19th-century melodies by composers Antonio Lotti and Johannes Brahms and relevant 18th- and 19th-century lyrics by dramatist John Gay (of The Beggar’s Opera fame) and musicologist Dr. Theodore Baker, respectively. Pen and Harmon have said their musical adaptation of the poem was inspired by a scarcity of plays by and for women during the 1980s.

The play leaves open the possibility of various interpretations while celebrating both the musicality of Rossetti’s layered verse and the power of the human bond between these sisters who are, as Guest and Lee both say, “so different and yet so connected.” The actors see it as a women’s story with universal human application.

Kimmel calls the play a “springboard for the imagination,” envisioning a production that “emphasizes different themes and the interaction between the characters” but resists a single or didactic reading. 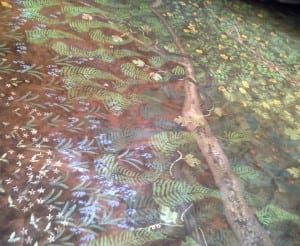 Created by Sheila Rauch, the  floor covering for the set of Goblin Market  invokes the Pre-Raphaelite style of Rossetti’s era.

The two-woman show blends a number of challenges with its joys, which may account for why it has been so rarely staged. The physical movement required as each sister morphs into the other’s remembered goblins was one of the play’s draws for Guest. The full Victorian corsets she and Lee will be wearing onstage make the choreography all the more impressive.

The opera-like solos and duets demand a broad vocal range from the two actors, whereas the strange and sometimes shifting meters of the spoken parts make them hard to memorize. The musical accompaniment provided by Liz Toleno on keyboard and Mike LaRocco on percussion involves hard choices and multitasking.

The single set, limited to Lizzie and Laura’s childhood room, gains Victorian splendor through the floor covering, created by Sheila Rauch using rubber stamps and primary colors. Its attention to natural details invokes the paintings of the Pre-Raphaelite Brotherhood, which included Rossetti’s brothers Dante and William. Although the brothers promoted their sister’s work, they never granted her full membership. Rossetti dedicated Goblin Market to her older sister, Maria.