Nick Groombridge delivers the toast To a Haggis, reciting Robert Burns’ ode to the “great chieftain o’ the pudding-race,” at the 2015 Traditional Burns Night Celebration, held at the Roundhouse, Beacon, Jan. 24, and sponsored by the Hudson Highlands Pipe Band, based in Cold Spring. 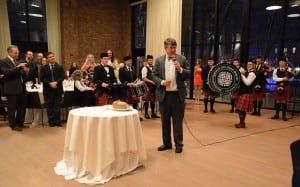 A haggis, a sausage-like concoction typically cooked in a sheep’s stomach, inevitably takes place of honor at Burns festivities. Groombridge’s salute was one of several toasts over the course of the evening, which also included a brief recognition of Gordon Stewart, founder-publisher of Philipstown.info and The Paper, who had delivered a well-remembered tribute to Burns at a Burns Night several years ago and who died in late November.

Below, members of the Hudson Highlands Pipe Band perform at the event. 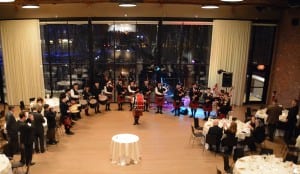 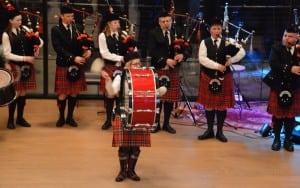