Who says getting old can’t be beautiful? The documentary Pretty Old chronicles the experiences of four women ranging in age from 67 to 84 as they compete in the Ms. Senior Sweetheart Pageant in Fall River, Massachusetts. As they prepare for the pageant, these women share lifelong insecurities and newfound passions that challenge common stereotypes of the aging process. 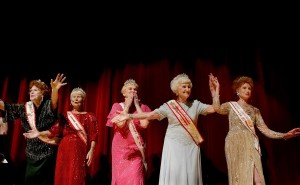 A scene from ”Pretty Old”

The film was produced by Vassar College alumnus Josh Alexander (class of 1997), executive-produced by actress Sarah Jessica Parker and has played to soldout screenings at film festivals across the United States.

It will be screened at the Martel Theater at Vassar College at 5 p.m. on Friday, Feb. 6. The screening will be followed by a brief talk with Alexander. This event is free and open to the public and sponsored by the Drama Department.

Pretty Old premiered at the 2012 Santa Barbara International Film Festival where it won the Jury Award for Best Documentary. The film was released in the U.S. and Canada in 2014.

Alexander is one of the founders of Group Effort Films. He wrote, produced and starred in Backseat, which won the Audience Award at the Austin Film Festival and was released in 2008. He is currently writing and producing acclaimed photographer Gillian Laub’s debut documentary Southern Rites, which looks at a small town in Georgia coming of age around issues of race. It will premiere on HBO in 2015.

For directions to and information on accessibility at Vassar, visit the college’s homepage, vassar.edu.