Most food establishments wind up each day with excess product, some of which can’t be used in any way. The Beacon Bagel was no exception, but instead of simply discarding the day’s extras, owner Art Burns figured out a better way to put it to use: providing nourishment for those who most need it.

For some time now, each Wednesday he has taken the excess bagels, along with things like cream cheese approaching the use-by date and other fillings and condiments, and has made sandwiches, distributing them via a bin placed outside the store. There, on a simple “take it if you need it” basis, the sandwiches, often as many as 25, have been spoken for, within a matter of hours.

“When we started,” said Burns, “we’d put them out [around 3:30 p.m.] and there would still be some there into the early evening hours, but now they are always gone by 6 p.m.” Burns said it’s obvious to him that word is spreading. “We’re getting the rougher cases now, people who are really depending on this; homeless people are showing up. It’s exciting to see and encouraging to know that word is getting out,” he said.

After the community became aware that The Beacon Bagel was doing this, “People started handing me money,” Burns related. “So I took it and applied it to better ingredients, like turkey and ham.” Over the holidays Burns was receiving more than a hundred dollars a week in cash donations, though this has tapered off now.

Convinced that the idea can be expanded locally, Burns is approaching other local food establishments with the idea of pooling donations and providing food for the needy on a seven-days-a-week basis. This will be accomplished by setting up donation bins at each of seven entities. 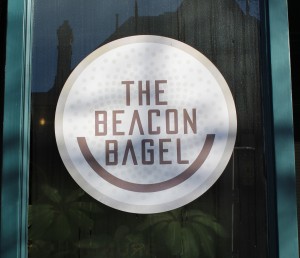 Using those contributions, each establishment will bear responsibility for providing food for one day each week. If it turns out that some businesses generate far more donation income than others, the donations may wind up being pooled, with proceeds divided in a way that will allow each business to participate without loss.

The food donations will be collected by volunteers (more are needed — stop by The Beacon Bagel and ask) and brought to a central drop-off/pickup site, probably outside of the Salvation Army, so that those in need will always know where they can get something and don’t have to remember different sites on different days.

With profit margins in the food industry being “so slim, it can be hard to ask food merchants to donate a lot,” Burns noted; this method takes the pressure off the merchants, and instead it is the customers who fund the charity drive while the merchant facilitates and fulfills it. Rabbi Brent Spodek of Beacon Hebrew Alliance is helping Burns with the organization, and Burns is expecting confirmation from the other six businesses shortly.