Eight boys and girls out of 30 participants were named local champions of the 2015 Knights of Columbus Free Throw Championship and have earned the right to compete at the district level to be held in February with an eye toward moving on to the regional, downstate and state levels of competition. Loretto Council No. 536 sponsored the local competition at the Capuchin Youth and Family Ministries Gym on Thursday, Jan. 22. 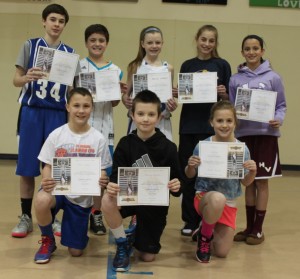 In the 12-year-old girls’ bracket, Taylor Farrell and Shianne Twoguns were tied, with each making eight free throws. In the tiebreaker round, Taylor made four free throws to beat Shianne by one. Alex Kubik was the winner of the 12-year-old boys’ bracket (10 for 15).

Each youngster who entered the competition received a certificate of participation. The local champions will each receive an engraved trophy and championship certificate from the Loretto Council.

Photo courtesy of Loretto Council No. 536