If there are “Bureau of Noise Complaints” offices out there for people suffering from the racket next door, what would their opposite be dubbed? “Bureau of Sweet Sounds,” offering proclamations rather citations? If such a municipal office existed, Nelsonville’s David Limburg would be in there, nominating his neighbor Gareth Guest for commendation:

One day I heard him playing. I went out and told him he had the most beautiful clarinet sound I had ever heard. Later, I attended a recital he gave, playing some classical and some jazz; it was lovely. He and [pianist] Tom McCoy played together; it was full of feeling and a nice introduction to First Presbyterian and their coterie.

A preview of that concert described Guest as having “played jazz and swing in big bands since he was a young man growing up in Pensacola, Florida. Alongside his career as a theoretical physicist and college professor, Guest has always found bands and concert work to keep his horns busy.”

This musical proximity was the serendipitous trigger for Limburg’s return to playing the trumpet and cornet after a decades-long hiatus. It also spurred Limburg to produce and participate in (thus far) a couple of jazz concerts, the second of which, a free New Orleans–style jazz concert celebrating Mardi Gras for Valentine’s Day, will take place Saturday, Feb. 14, at 3 p.m. 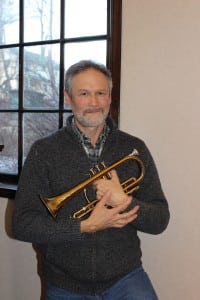 Man with a horn: David Limburg and his cornet (photo by A. Rooney)

Joining Limburg and Guest will be vocalist Rene Bailey (who has performed with Louis Armstrong, Sam Cooke and many other greats), bassist David Winograd (who leads the band Saints of Swing), trombonist Harvey Tibbs, pianist Jake Lentz and drummer Randy Smith, all “fabulous players and very nice people,” according to Limberg.

They’ll be playing material written from “pre-1900 through around 1927,” Limburg said. “We’re trying to stick with that time period; that’s one of the guiding principles. Another is the story-grouping that songs tell, which is not as deliberate as, say, a Schubert song cycle, but the flow from song to song gives the feeling of a narrative. In this case the songs have to do with Valentine’s Day, Mardi Gras and New Orleans. You learn a lot if you research these things — songs you think you know turn out to have lyrics you didn’t know, or something you thought was a traditional spiritual turns out to be written by a specific person in a specific year. There has been a lot of discussion in the process.”

Limburg has asked the other players, all professional musicians, for feedback, questioning them whether his choices “play well … do they have a feel as to how it may come across to an audience?” “Do you like them?”

Although this concert is not educational per se, Limburg is aware that “not everyone knows much about early jazz. They tend to know Benny Goodman, Miles Davis, John Coltrane, and there’s a stereotyping of this [different, earlier] music as ‘happy, happy’ and not representative of the feeling of the originals — sort of like playing Mozart with go-go dancers. This is not Muzak, not easy listening, although it’s a very pleasant experience,” he explained, further noting that New Orleans–style jazz is sometimes called Dixieland. “It’s essentially the earliest form of jazz. What we’re playing is very evolved from the original forms but still not so far away that you can’t feel that connection,” he said.

“Jazz came together in the 1890s in New Orleans out of many influences,” according to Limburg, “including brass band music, gospel, ragtime, parlor songs, popular stage songs from traveling shows and Tin Pan Alley songs. Early jazz was very much like early rock ’n’ roll: vernacular music for a broad working-class audience, played in bars, dance halls — making it up as they went along.”

Noting the prevalence of the word “blues” in many song titles of the day, Limburg explained: “In the ’20s there wasn’t an established form of blues to any great extent. There were 12-bar blues that we know now; they weren’t a big presence, but big enough that the word ‘blues’ became important, so all the publishers named the songs ‘blues’ … The appearance of blues on a public scale was not a big thing. Jazz was already kind of bluesy but generally was played in the form of pop and novelty songs.”

Limburg knows of what he speaks when talking about music publishers. He decided against a professional music career despite studying clarinet and saxophone at music school — “It was too hard,” he recalled; “I knew I would have 50 roommates, unmatched forks and knives for the rest of my days, and that didn’t look good to me. If you’re really, really good and really, really lucky, maybe you’ll make a living.” Instead, Limburg worked in a sheet music store (remember those?) in Cambridge, Massachusetts, for many years. After it closed, he did a variety of other things, eventually settling into his present career, working in digital graphics. 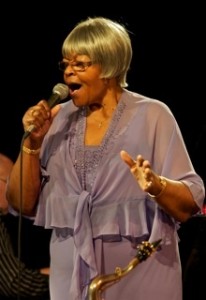 Overhearing that clarinet next door coalesced with an experience he had around that time, listening to a King Oliver recording. He was struck with an “I have to do that” feeling, and it led him to study, which he has done since, working with Ivan Hunter, whom he called “very well-regarded in the brass world, and a wonderful teacher.”

Just a year after starting anew with playing music, Limburg decided to jump into pulling together a group of musicians for a concert. Last fall, he and six other musicians (most of whom will be playing again on Feb. 14), performed at First Presbyterian, the church on Academy Street in Cold Spring known for its monthly Jazz Vespers services.

It was a bit more than he bargained for: “It was an awful lot to do: copy sheet music, find and hire players, arrange for space at the church, design, print and post posters, place ads, arrange for food at the reception, oh and lead rehearsals and learn how to play well enough to perform!” With just two rehearsals, it all came off very well, largely, Limburg said, “because these musicians are professionals. These guys have listened broadly and can just ‘do it.’”

The upcoming concert will be “historically informed, but not historically dictated,” Limburg pronounced before delving more into the Dixieland form:

It began with the Original Dixieland Jass [not a spelling error] Band, or ODJB. The word ‘Dixieland’ was associated with them. These guys were from New Orleans; they were white players who imitated black players. Their first hit was “Livery Stable Blues,” in which they made animal noises with their instruments. That novelty helped bring music to a broad audience. Over time, Dixieland came to mean a derivative of Chicago-style jazz: white players, and not the “dirty stuff.” It was all dance music at that time — grab your sweetie and push her around the floor.

Although Dixieland is not currently a popular form of music, a la hip-hop and rap, Limburg said there are “still a lot of enthusiasts, all over the world, because we have recordings and it’s a very lively earful.

“This concert is something out of the ordinary and I’m hoping people enjoy it,” Limburg said. “It’s free — just turn up, and there are extra points for wearing something red.” And yes, dancing will be allowed at the church on Valentine’s Day.