Questions of governance of the Garrison Volunteer Fire Company dominated the Philipstown Town Board last week, with suggestions for both a new fire district for Garrison and the alternative of a consolidated district for all Philipstown — and with Town Board emphasis on the need for any move to come from firefighters themselves. 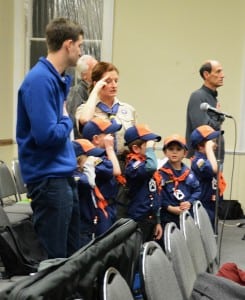 Cub Scouts open the Town Board meeting by leading the Pledge of Allegiance.

The Feb. 5 session, the board’s formal monthly meeting, began at Town Hall as many do with a Scout troop — this time, Tiger Cub Scout Pack 137 — leading the Pledge of Allegiance. After doing the honors, the cubs scooted back to their den, perhaps fortuitously, considering the sometimes strident comments subsequently exchanged by Garrison resident Joe Regele and Supervisor Richard Shea over fire company matters.

Long critical of the GVFC’s handling of its money, Regele got the fire district issue placed on the board agenda. Forming a Garrison district would transfer GVFC oversight from the Town Board to a set of elected fire district commissioners.

Regele opposed a stand-alone district. Instead, he advocated a consolidated district to oversee all four Philipstown fire departments. The controversial 2011 Graner report, a study by a veteran firefighting expert brought in to review Philipstown’s emergency services, made the same recommendation — which local firefighters heatedly rejected.

“There’s been a lot of discussion” off and on recently about forming a Garrison fire district. “I was under the impression that this [discussion] was ongoing,” he said, asking that it take place openly.

Creating a Garrison-only district “is absolutely flying in the face of the recommendation of the paid consultant,” Ron Graner, Regele declared. “I’d urge the Town Board: If there’s going to be talk about a fire district, this is the time to exert some leadership and attempt to bring together all the emergency services,” instead of establishing another small, new entity. “You have a very detailed report [from Graner] telling you that balkanizing the fire and emergency services is a very bad idea. My fear is that we’re about to set up another new ‘Balkan’ community” — a Garrison fire district. 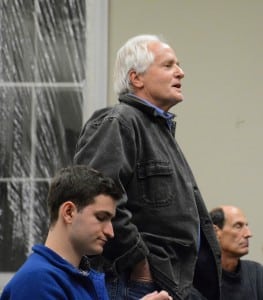 Joe Regele makes a case for a town-wide fire district.

“I’m looking for the board to provide some leadership,” he said. “The issue is whether or not the Town Board takes the opportunity, rather than do this [Garrison district] to see if there’s not a way to pull the emergency services [together]. Make one district.”

Acknowledging that “some really initial discussions have occurred” about a Garrison district, Shea explained that “right now, this is in its nascent stage.” Furthermore, “when the fire company comes to the Town Board and says, ‘We’d like to open a discussion about a fire district,’ it’s worth pursuing,” he said. “We’re going to have these discussions about a district. What comes out of it, nobody knows. But I want it [the instigation] to come from the firehouse.”

Regele objected that “once you have a fire district for Garrison, we’ll have even less chance of trying to consolidate emergency services” town-wide.

Shea disagreed. “We feel it’s a step further toward that,” he said.

Councilor John Van Tassel suggested that experience with a fire district might familiarize everyone with how districts work and thus speed acceptance of a town-wide emergency services district.

Shea also said that with fire districts, members of the public can seek office as fire commissioners and exercise control over a fire department.

But Regele said that statewide data shows that fire commissioner elections tend to draw a minuscule pool of voters, many of them strongly connected to the fire company involved, “rather than having voters represented by the broader community.” Should Garrison get a fire district, “this will end up being a very small group of self-referencing people who will then do what they want. Therefore, I don’t believe it actually serves the interests of the town, even if the town is somewhat apathetic about it” and voters ignore commissioner elections, he said. The board seemed to say, ‘We’re going to offload this responsibility on the apathetic public.’ I’m asking for some leadership here,” he told the board.

Van Tassel said the quality of the fire district leadership “depends on the people” elected and questioned why a single town-wide district would draw a higher voter turnout in commissioner elections than a small, independent district.

Shea expressed less enthusiasm for the Graner report than Regele, saying he did not agree with all its conclusions and found “the mechanism was not all that effective.” Given the opposition it generated, it “brought together the fire companies like never before, but it didn’t create this sort of sense of harmony,” he said. “The one good thing to come out of this was that it did spark a discussion we weren’t having before.” Since then, “we’ve made a lot of progress with all the emergency services,” including the Garrison fire company, which until recently often clashed with the Town Board over finances and procedures.

“If things are thrust upon the fire department,” consolidation won’t work, Shea stressed. “Unless this is a more organic, fire-department-driven process, it’s not going to be successful. It’s not based in reality to say, ‘OK, this year we’re going to start working on a town-wide fire district and get it done in the next year, year and a half, two years.”

The board touched upon another emergency services topic in a brief visit from Bob Lipton, Putnam County’s acting commissioner of the Bureau of Emergency Services. The county is seeking a new full commissioner to succeed Adam Stiebeling, whom County Executive MaryEllen Odell did not reappoint in January but with whom, Van Tassel noted, the Town Board had enjoyed a good town-county working relationship. 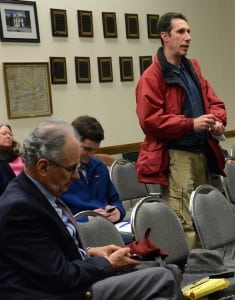 Lipton expressed county interest in closer ties with municipalities and admitted that a recent attempt went awry: A pre-snowstorm conference phone call involving officials from multiple jurisdictions broke down when “we maxed-out the phone number,” overloading the system and excluding would-be participants.

“They all got busy signals,” including Philipstown Councilor Nancy Montgomery, Van Tassel recalled. He advised further efforts, before another storm or crisis.

“I think that’s a good idea, and the sooner the better we do it,” Lipton replied.

At a workshop Feb. 3, the Town Board, with little fanfare, approved a law to regulate use of residential wind turbines — a sort of modern backyard windmill — to generate power for individual homeowners. The board action followed a public hearing, which drew one speaker, Andy Chmar of the Hudson Highlands Land Trust, who praised the board for the new law.