Family, friends and neighbors gather at Our Lady of Loretto

The ceremony was a Mass of Christian Burial presided over by the former pastor of the church, Fr. Brian McSweeney, who returned to offer consolation to a family with whom he has had a long relationship.

Several concelebrating priests, including Fr. Thomas Kiely, the current pastor, and priests from the Capuchin Youth and Family Ministries in Garrison, accompanied him. All wore white vestments, signifying the hope of resurrection after death, 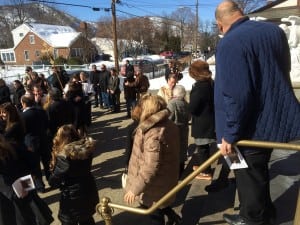 Mourners console one another outside Our Lady of Lorretto Church (Photo by K.E. Foley)

McSweeney in his homily underscored that the Catholic faith teaches that death is the end of the human journey but not the end of life. He reminded the faithful that young Anthony would be reunited with his family in the afterlife.

In a particularly poignant reference McSweeney recalled the burial Mass 14 months ago for Jim Lovell, husband of Nancy Montgomery, who is the sister of Mary Ellen Yannitelli, mother of the deceased. McSweeney suggested Lovell would be waiting to greet Anthony and “would probably have a few questions for him.”

McSweeney managed a moment of levity amidst a sea of sadness when he referred to Anthony as Huck Finn (as a relative had previously observed). McSweeney noted that in Mark Twain’s story of Huck the character gets to view his own funeral. The priest suggested that Anthony would also be curious to see who had shown up and he was likely looking down at that very moment.

Members of the Yannitelli, Montgomery and Lovell families served as pallbearers, readers of scripture and performers of music.

At the start of the ceremony Hudson Lovell, the youngest son of Nancy and Jim, sweetly offered from the choir loft a bluegrass lament to the memory of his cousin, who McSweeney later noted “was passionate about music.” The song’s lyrics echoed off the back wall of the church’s altar, which depicts two angels surrounding a picture of Mary, the Mother of Jesus according to Catholic tradition

Other music tributes included traditional Catholic hymns and a rendition of an Irish song of farewell, which concludes:

And until we meet again
May God hold you in the palm of His hand.

Seth Gallagher of the Hudson Highlands Pipe Band played as Yannitelli’s family and friends carried his casket from the church. Outside in the noontime frost the mourners embraced one another, seeking some solace amidst their grief.