Main Street’s newest business is a center for Magic: The Gathering

Philipstown’s avid game players have already found their way to Cold Spring’s Groombridge Games, even though the store has been open for less than two weeks. Word is out on the gaming street about “GG,” the only such store in the area (others, located in Wappingers and Peekskill, have recently shut their doors, leaving one in Poughkeepsie the closest) focusing on Magic: The Gathering (MTG) and other card-based games familiar to many in their teens and 20s. One advantage of their Main Street location, in relation to their sometimes not-driving-yet clientele, is it is walkable from the train station. 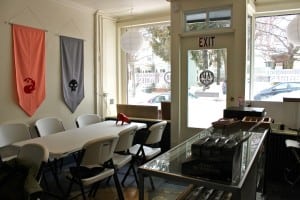 Peering into Groombridge Games, one does not see the bank of computer terminals associated with online gaming, but rather, along with display cases filled with merchandise, there are tables set up for communal game playing, for actual person-to-person interaction and competition. Interaction there already is — the store hosted a birthday party during its opening week, and tournament play has begun.

In addition to its focus on MTG and other collectable card games (Pokemon, Yugio), which includes trays of cards for sale (GG also buys cards), the new store has much more in stock, from board games to books, action figures and accessories like plastic sleeves and deck boxes to hold cards. The board games tend toward those in which players employ strategizing and/or role-playing. Many are cooperative games in which players play against the game itself rather than against each other. Games currently in stock include Diplomacy, Ingenious, Civilization, Shadowman, Ace of Rebellion, Edge of Empire, Axis and Allies, Road Rally, Provincia Romana, Power Grid, a variety of Star Wars games and many Munchkin games, which are a sort of parody of Dungeons and Dragons.

There are also action figures and collectibles from MTG, Game of Thrones and Big Hero, a collection of sci-fi books and miscellaneous related goods, for example a card game called Gloom, in which a player draws a family of misfits and the goal is to make them as unhappy as possible before they die!

The store does not stock traditional board games for children, though they will have chess sets for sale and are also looking at a possible sideline in “cosplay” accessories (cosplay is dressing up as a character from a movie, book or video game, which originated in Japan particularly around manga and anime). Groombridge Games is able to do special orders, and they’ll be stocking new games as time goes on; current opening inventory is just a taste of what’s to come.

Opening a store of this kind has long been an idea of Ian Groombridge, who manages it. Groombridge, 22, said he started becoming interested in games through video games, at around the age of 10. This was followed by a fascination with Dungeons and Dragons, the fantasy role-playing game that many feel was one of the inspirations for MTG. Groombridge started playing MTG about four years ago. He thinks its appeal lies in the combination of skill and luck required for success, as players create their own decks and then see how they fare against other players. The Groombridge Games shelves are stocked with a cross section of board games, action figures and related books.

Groombridge’s mother and partner in the store, Kim Conner, called MTG “personally interactive. People come to stores across the country to play it, every Friday night.” Conner described being in a Silicon Valley mall recently, where four storefronts had been taken over for tournaments, with over a hundred people standing in line to get in. “There’s a social component to it,” she noted, adding that “these games are not just for kids; the average age for MTG players is about 22.”

Neither Groombridge nor Conner has ever owned a retail store, though Groombridge does have experience working in a store similar to this one. In the parent-child endeavor, with Conner determined that Groombridge take on most of the operational setup, including ordering stock, wading through all the requisite paperwork, etc., there has been the usual learning curve for both of them, made more specific by the type of merchandise they are offering.

“There are a lot of hoops to jump through to become a store,” said Conner, “particularly with the company that makes MTG, which has established it as sort of a network … You have to open your store and stock it with their products before being allowed to have ‘official’ game nights … There are also very few companies that distribute these games.” Groombridge added, “You have to prove that you’re a brick-and-mortar store, so that they don’t think you’re going to just sell things online.”

Conner said she had been thinking of having a Main Street business for a while, but was never certain what it should be. She said the impetus behind GG was to “have a place where kids can come and just ‘be,’ because that’s never been available here. Now kids can come in after school and play Magic and hang out and talk to people. It’s designed for drop-ins. We have Wi-Fi on a guest network and snacks are available.”

Tournament play has begun — Groombridge is a certified MTG judge, and GG has officially been approved by Wizards of the Coast to host MTG tournaments and Dungeons and Dragons Adventures. The tournaments basically involve an entrance fee and then prize support, with game packs awarded depending on how you play. 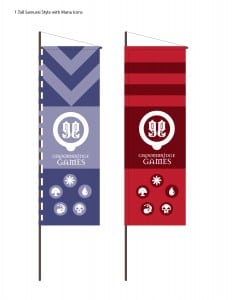 They are currently hosting MTG Standard Tournaments on Friday nights, and MTG Limited events on Saturday nights. (The difference between Constructed Magic, of which Standard is a part, and Limited Magic is that in Constructed Magic you build a deck out of your personal collection and play it, whereas in Limited you build a deck out of a set of cards opened on the spot.) GG is also available for party rental in a basic way: You bring in the cake; they’ll provide the games.

Taking over what was formerly the Terence Donovan Gallery, GG enlisted local talent and workmanship to ready the space for opening. Their logo was designed by Gary Tooth of Empire Design Studio; a mappa mundi of the imaginary land of Magic on the floor of the shop was designed and painted by Susan English; while Russell and Ellen Roessel and Brian Levine, of Roessel Builders Inc., helped get the store ready to open.

Groombridge Games is located at 165 Main St. (phone 845-809-5614). They are open from noon to 9 p.m., Wednesday through Sunday. Up-to-date information can be found on their Facebook page and at groombridgegames.com.

What Is Magic: The Gathering?

For the uninitiated, MTG is a trading card game, replete with complex rules and the tried-and-true goal of defeating one’s opponents, in this case with spells, artifacts and creatures. First published about 20 years ago and now played by over 12 million players worldwide, MTG is played using a deck of actual cards (over 60 of them) or via the online equivalent cards through various software programs.

Magic is a game of strategy played by two or more players in which each player’s deck contains cards of various fantastical creatures, spells and artifacts. These cards combine both fantasy (wizards, goblins, etc.) and mythological imagery (sphinxes, shamans, etc.), and each figure has its own unique effects and abilities.

Strategically, the game combines various elements of gameplay, with a mix of elements drawn from such disparate sources as poker and chess, along with luck of the draw. In addition to the games, played casually or in organized tournaments (some players are professionals), the cards themselves, though looking like ordinary cardboard rectangles with designs on them, have evolved into their own currency, per se, with values attached to their rarity and usefulness in gameplay.

Note: Many of these details were provided by this reporter’s 18-year-old son.

3 thoughts on “Got Game? Groombridge Games Does”