Recently I’ve gotten a lot of questions about organic gardening and why to do it at home. Conventional agriculture strikes fear into most of us. It tends to mean using large quantities of chemicals in order to grow food. In order to turn the greatest profit, corporations compromise the health of the environment and the consumer — at least that’s the common conception. Local is better and local/organic is best in the hierarchy of food that’s good for us. Although most people still purchase the majority of their fruits and vegetables at chain grocery stores instead of a farmers market, there are many more choices.

In the long run, is a little bit of pesticide, herbicide or a general-use synthetic fertilizer going to do that much harm in a small vegetable garden? We tend to blame agribusiness for reckless disregard for the environment and focus less on home gardener’s choices simply because the scale is smaller, therefore the problem is smaller. It all contributes to the bigger problem, though.

Organic gardening relies on living, vital soil and pest management methods instead of chemicals. Soil is the basis for plants to get nutrients. The main nutrients are nitrogen for shoots (growth), potassium for fruits and phosphorus for roots. On a bag of fertilizer these are represented as N, K and P, respectively. If your tomatoes get a blast of nitrogen and not enough potassium, you’ll have tall, leafy plants and a not-so-great yield. It’s all about balance. 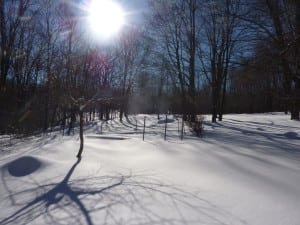 It’s hard to imagine right now but there is a garden waiting under all that snow. (Photo by P. Doan)

Soil can be enhanced with organic materials that will slowly release these nutrients as they decompose. Sometimes plants need a quick infusion, though, and chemical fertilizers will do the trick. They are absorbed much faster because they don’t have to break down.

The downside is that it doesn’t remain in the soil and has to be reapplied, and it’s tricky to get the right amount in the right place. Chemical fertilizers applied incorrectly can harm the plants and be washed into streams, lakes and rivers by rainfall. Following directions carefully when using chemical fertilizers is essential.

Organic gardening doesn’t have those negatives. I’ve never heard from a gardener whose soil was too good because they’d added too much compost. Even using a store-brand organic fertilizer like bone meal or manure can’t cause the kind of harm to the environment that a synthetic fertilizer can.

Paying attention to healthy soil means that plants are stronger and better able to withstand pests and disease; they don’t need as many interventions with pesticides or herbicides. Soil that is enhanced with organic matter has better water retention, drainage and structure. Soil microbes feed on organic matter and break it down. There’s a whole cycle of life in soil that is supported with organic gardening methods. If you do nothing else organically, creating a solid foundation for your plants with soil amendments will get you most of the way to successful growing.

Consider the chemicals that are commonly used in conventional agriculture. Roundup, a popular and widely available herbicide, has been linked as a possible cause of colony collapse disorder in mass die-offs of bees, for example. Pesticides don’t just affect a single insect species but can indeterminately kill all the insects that come in contact with it, even the beneficial insects.

Chemical fertilizers, as I mentioned, don’t have to stay in the place where they’re applied. Once they get into the soil, they can move. Unleashing any synthetic materials or chemicals into a green space leads to consequences, whether you can see it or not.

Organic gardening is a way to approach a more harmonious relationship with the environment. By choosing to leave out chemicals and synthetics, the gardener is forced to learn about the plot of land and what it needs for maximum vitality to encourage the desired results.

The setup needs might be more demanding in the beginning, like a composting system and adding organic materials to the soil, but once these are in motion, maintaining it over the long term isn’t as challenging or time-consuming once you’re in the groove.

Going the conventional route requires constantly adding synthetic fertilizer to soil that doesn’t have the nutrients a plant needs and won’t until it’s organically balanced. It will be depleted more and more. While you’re making that list and drawing out the garden this year, take care of the soil and let nature do the rest.

It’s hard to imagine right now but there is a garden waiting under all that snow.

One thought on “Roots and Shoots: For a Good Harvest, Start With the Soil”