Lydia JA Langley loves her birds — all 30-plus of them. She loves her crested frizzles and leghorn Polishes, her Marans and Ameraucanas. As partial to the “starters” sold at Blue Seal as the rare, heirloom breeds, Langley is quite simply crazy for chickens.

As a city-to-Cold-Spring-weekender to full-time-Garrison transplant, living on a historic farm property there, she had no experience with chickens but took the plunge with an initial six back in 2008. That number quickly grew, and Langley, brought up in the New Jersey suburbs, found herself with 30 pet chickens, most of whom did what they do best, especially under the right conditions: lay eggs.

Shifting away from her former, New York City–based life as an interior designer, she began selling what they were laying, dubbing her farm a “yolkette” and delivering the freshest of eggs to Philipstown and beyond, all the while absorbing and researching the world of chickens.

Now a font of knowledge of all things poultry or, as she puts it, an “eggspert,” she is embarking on a related course, becoming a consultant on raising backyard chickens. “I am hanging out a shingle to help newcomers enter the fascinating world of pullets, cockerels, hens and roosters … Whether you would like to discuss coordinating your fledging project from start to finish or want to maximize your current flock, I love what I do and I’d be happy to be your ‘everything chickens’ resource.”

Why chickens? It all began in Turkey … the country of Turkey, that is. About 20 years ago, Langley took a trip there and spent a night with a family in the countryside. “The matriarch went out and gathered eggs, which she then cooked — and they were spectacular, and it made me realize what eggs can actually taste like.” 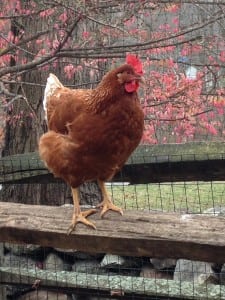 After a later sojourn in North Carolina, where she sampled many fresh eggs, Langley and her husband decided, despite their lack of experience (hers, none whatsoever; his, a couple of chickens growing up), they wanted to put the 19th-century-built barns on their property, which had been in disuse except as storage, back in action — chicken action.

“We had preexisting space conducive to housing chickens, so we thought we’d try it,” she said. Plus, Langley felt an affinity for the chickens themselves, not just their eggs. “They’re sociable, they come over to you, respond to you — they’re full of personality,” she enthused.

Langley emphasized that she and her husband consider their chickens as pets. “We have a personal relationship with our hens,” she noted. Though egg production dwindles during the typical chicken’s life span (of around five years, only the first two of which are egg-producing), her farm is “no kill — they spend their entire lives with us, and their safety and well-being is most important.”

On average each of the 30 hens on hand lays about four to five eggs a week, although a few lay every day, and “Rocket” (all of the birds are named) whom Langley calls “temperamental,” produces a mere two or three. Egg production depends on the weather. 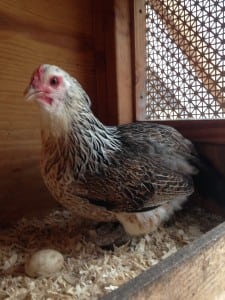 “Since we can’t free-range this time of the year, there aren’t as many, but they’re kept in an enclosed yard with raptor nettings, so they can sit in the sun, but they can’t forage right now,” Langley explained, adding that they come in at sunset through an automatic door. Although they’ve never experienced a ground predator, they have had some issues from time to time with hawks and falcons.

Each dozen-egg carton (recyclable and returnable to Langley each time new eggs are delivered) of “Chickie Whiskers” eggs (the name reflects her equal love of cats) contains ovals of varying hues, from speckled brown to a washed green, ivory, near-red and more, but “within the flock there should be no difference between taste and nutrition,” no matter what the shell color, Langley said. “In warmer months, when they have access to grass and bugs, the eggs taste their best.”

It was originally only the Langleys’ friends who got to sample the eggs, as the distribution began via word of mouth. Although they have occasionally delivered in bulk to New York City, their usual clientele has weekly standing orders, or simply on an as-needed basis, or as she describes her clientele, “weekly, bi-weekly and those I annoy,” as well as some local businesses.

Langley delivers the eggs — sometimes still warm, to her neighbor, 100 feet away, and on her near daily rounds all over Philipstown. In addition to everything else, a great byproduct of this old-fashioned delivery system (replete with handwritten names on ribbon-fastened carton tags) has been meeting new people.

“It’s been a wonderful social thing, too,” Langley said. “Our goal is to be the local resource for people. We don’t want to sell commercially. We love having pet chickens — it’s great for insect control and they amuse us.”

Asked why raising backyard chickens appears to be such a trend right now, Langley thinks it’s “having that aspect of being in control of your food supply, and also just that bit of life in your backyard.” But, for healthy, thriving chickens, much must be learned, and that’s where “Home to Roost”, as Langley has dubbed her new consulting services, comes in. 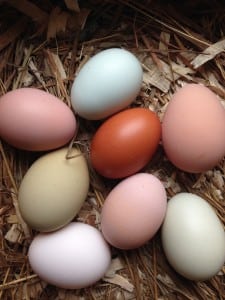 The naturally varied hues of Chickie Whiskers’ eggs reflect the different breeds of hens laying them.

Although “small backyards can still keep fat, happy chickens,” potential backyarders need advice on which variety of birds are most suitable to their specific situation, how to set up and maintain coops and all the nitty-gritty on the care and feeding of the flock, including medical issues that might arise and are most often avoided through prevention techniques.

Langley can work with those still in the planning stages, and also those who wish to maximize the output of an existing flock. She is also able to foster chicks until they are out of the “danger zone.” “The most important aspect is housing,” Langley said, “and I can work with preexisting space or set up something new.”

She arrived in Philipstown almost accidentally — a magazine left in Langley’s New York City mailroom opened to a page displaying an ad from McCaffrey Realty got her attention, and soon thereafter she found herself owning a small weekend house in Cold Spring; Sept. 11 prompted her departure from year-round residency there, and circumstances (including meeting her husband Robert) led the former Mount Holyoke art history major and Parsons School of Design interior design graduate to country roads and a life with chickens. 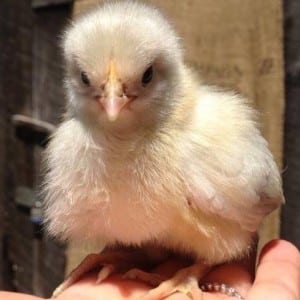 She’s happy about it. “Discovering new information is endless and that’s the fun of it. They’re such nice creatures, you want to do everything for them, and then they will make good eggs. We grow our eggs with love and want to share that passion with others.”

Langley will be presenting at the Cold Spring Farmers Market on March 7, from 10:30 a.m. to 1 p.m. She’ll be available to answer any questions and to talk to anyone interested in her consulting services. For information on both her egg deliveries and her consulting services, contact her at 845-705-0259 or [email protected], or visit the chickiewhiskers.eggs Facebook page.