The evening began with bad news.

“I know you all probably thought we’d be drinking beer here tonight,” joked Steve Rosenberg, Scenic Hudson’s senior vice president, as he stood in the red barn known as the River Center on the shores of the Hudson River at Beacon’s Long Dock Park on Feb. 17.

Alas, even though the event was titled “Local Beer via the Hudson Valley Foodshed,” Rosenberg sadly explained that there would be no tastings tonight, and that the intrepid souls who had arrived bearing fresh growlers from Beacon’s 2 Way Brewing Company with the intent of sharing them with the ample crowd would have to refrain. 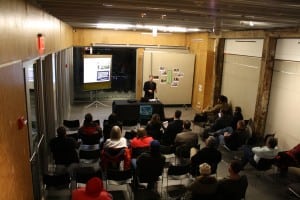 Scenic Hudson Senior Vice President Steve Rosenberg explains the concept of foodsheds at the River Center in Beacon as part of the organization’s Feb.17 lecture on local produce. (Photo courtesy of Scenic Hudson)

It was the only sour note on a night filled with optimism as Rosenberg and Emily Watson of Plan Bee Farm Brewery in Fishkill spoke about the Foodshed Conservation Plan, its many benefits to the Hudson Valley and how the foodshed is supporting the emerging craft beer revolution overtaking the area.

Their lecture was the first in a series of Tuesday evening lectures on local produce that Scenic Hudson will be presenting for the next month at the River Center. Future lectures will focus on native pollen bees (Feb. 24), soil regeneration (March 3), gardening with kids (March 10) and conservation easements (March 24). All lectures run from 6 to 7 p.m. and are open to the public.

While the idea of a watershed is a familiar one, the idea of defining a regional “foodshed” is less well known, even though the concept is over 85 years old. W.P. Hedden, an economist who worked for the N.Y. and N.J. Port Authority, first coined the term in his 1929 book How Great Cities Are Fed. 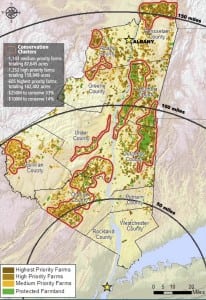 Whereas a watershed is primarily tangible — the dikes, dams, slopes and creeks that allow water to converge at a single point — a foodshed is defined not only by the landscape, but by the economic structures and relationships that allow food to travel from the place it’s produced to the cities and towns in which it’s consumed.

The Hudson Valley foodshed is made up of over 5,000 farms that feed the valley itself and New York City. Although the amount of food that the valley supplies to the five boroughs is significant — over 85 percent of the foods featured at New York City Greenmarkets come from the Hudson Valley — it’s nowhere near enough to meet the city’s ravenous demand. 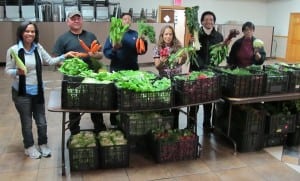 The 125th Street Fresh Connect Market, which is the Bronx CSA of the New York City Coalition Against Hunger (Photo by Terence Duvall)

According to Rosenberg, recent studies estimate that the monetary value in unmet demand for fresh, local food in New York City is in the neighborhood of $1 billion. “That’s a big number, and it means a lot to local farmers,” he explained. “If you know there’s this unlimited demand for what you’re producing, that means that as long as you can produce it economically, hold onto your land and manage the competition, that you can make it because the market is there.”

Tourism and agriculture remain the Hudson Valley’s top two economic engines, so protecting and expanding the amount of farmland available is a critical part of sustaining the foodshed. Through conservation easements, over 80,000 acres of farmland have currently been preserved.

With an easement in place, these parcels of land have become permanently restricted to agricultural and associated uses, protecting wildlife and aquifers in the process. But approximately 650,000 acres of farmland in the foodshed remain unprotected. Scenic Hudson has identified 163,673 acres of that land within nine clusters as the highest priority going forward in terms of determining what to protect.

It won’t be cheap. Scenic Hudson estimates that it will cost around $720 million to protect those clusters of farmland in perpetuity. And all that protected farmland is going to need someone to farm it. Local farmers are retiring faster than they can be succeeded by new blood. Rosenberg grimly noted that the average age for a farmer in the Hudson Valley is currently 58.

Fortunately there are some young farmers in the Valley, such as Emily and Evan Watson. They’re the young couple who run Plan Bee Farm Brewery at their farm in Fishkill, although they’ve recently announced an ambitious plan to expand to a 25-acre farm in Poughkeepsie with enough space to increase their current production eight times over.

Plan Bee’s beers are unique in that they are entirely dependent on the local foodshed to be produced. “Everyone knows where their local brewery is,” Emily explained. “But those locations are where they make the beer, and not necessarily where the ingredients come from.” At Plan Bee, 100 percent of the ingredients come from within New York state, with many of them being grown on the farm itself. This includes honey from the farm’s hives that are used in the brewing process.

While this would seem to safely qualify the farm’s beers as “local,” for the Watsons it’s not quite local enough. And their goals going forward illustrate the dedication that the next generation of Hudson Valley farmers will need to have in order to act not just as farmers, but stewards of the land.

“Our goal is to reduce the radius of where our ingredients come from over the next few years until I can finally say that I personally planted and processed everything that goes into our beer,” said Emily.

That’s a goal that’s worth raising a glass to — even if that glass can’t be raised at the River Center itself.