Boys’ and girls’ basketball teams to vie for championships Feb. 28

In a late-night Section 1 Class C semifinal, the Haldane varsity boys basketball team took on Solomon Schechter on Monday, Feb. 23, at the Westchester County Center in White Plains. The Blue Devils’ depth, size and defense were no match for the undersized Lions from Westchester. After winning the opening tip and slamming home the first basket of the game, the Blue Devils ran the floor and scored at will. 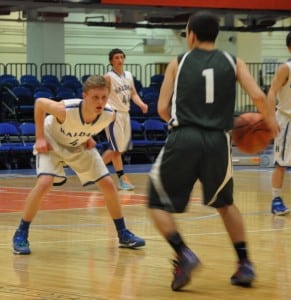 Blue Devil Eric Rizzi locks in on his opponent in the Feb. 23 semifinal.

On the defensive front, Haldane pressed, stole and blocked everything the Lions attempted to establish. Haldane ended the first quarter leading Schechter 20-5. The second quarter was no different, with the Blue Devils going on a 20-0 run to enter the half with a 40-5 lead.

With 42 seconds remaining in the third quarter, the Schechter players woke up the sleepy crowd by scoring a point for the first time in 15 minutes. Fans from both teams applauded the basket and cheered on the players. The Blue Devils wrapped up the victory, winning 61-17.

Next up the Blue Devils meet the Tuckahoe Tigers at the Westchester County Center on Saturday, Feb 28. The Blue Devils won the 2014 championship over the Tigers, 53-47. The game starts at 2 p.m.

Prior to that game, at noon, the girls’ varsity basketball team plays Hamilton at the County Center in the girls’ Sectional C championship game.

As most of its referees play on the Haldane teams, the Philipstown Recreation Center has postponed the final day of its Saturday elementary basketball leagues until March 7.