The large uppercase H on the front of their blue jerseys is an apt symbol of the melding of players from Haldane and Hendrick Hudson High Schools into a hockey team that is making its mark in the 2014–15 season. On Wednesday (Feb. 25) the Hendrick Hudson Sailors came from behind to notch their second playoff win of the week, defeating the Pawling Tigers 3-1 at the Brewster arena. The win came on the heels of Monday’s 5-1 win over Carmel at Newburgh’s Ice Time Sports Complex. 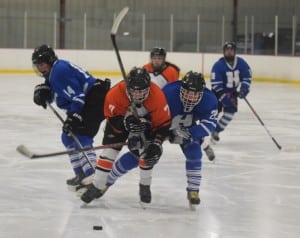 On Wednesday, the teams battled scoreless through most of the first period. The Tigers struck late in the period, scoring the game’s first goal with less than a minute to go. The Sailors tied it in the second frame, setting up a dramatic third period. The winning team would advance to the next round of playoffs. The loser would see their season end.

Hendrick Hudson’s Vinny Perez, a junior, ensured that the Sailors would live for another day as he tucked home the game-winning goal midway through the third period. Haldane senior Ramsey Heitmann scored the insurance marker, assisted by his brother Dan, a junior.

There was no doubt as to the game’s first star. Net-minder Michael Ciofalo, a senior at Hendrick Hudson, was brilliant in goal, making numerous excellent saves as he kept the Sailors in the game until they found their scoring touch.